The site of a historic battle during the American Civil War that took place on May 27th 1864 in Paulding County Georgia. Fought between Union Maj. Gen William Tecumseh Sherman and Confederate Gen Joseph E. Johnston the battle was a decisive Confederate victory. Fought in under only forty-five minutes the battle claimed the lives of 1,600 Union soldiers and 500 Confederate soldiers.

The marker commemorating the Battle at Pickett's Mill at the site of the battle. 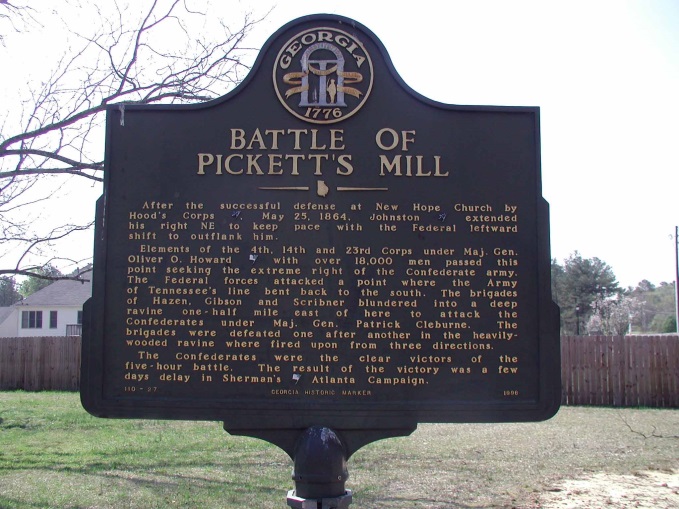 A Civil War map that mentions the Battle at Pickett's Mill. 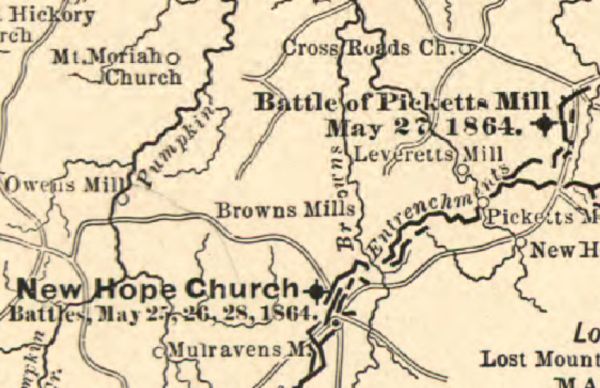 A modern photo of the area where the battle took place. 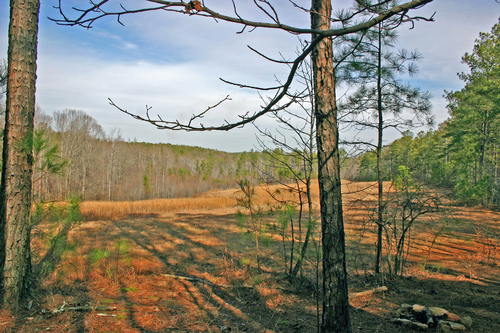 Throughout the United States, there are several preserved battlefields that remind America of the conflict that divided America known as the Civil War. Whether the battles took place in open fields or on individual properties, these battles were crucial in helping to decide the fate of the American way of life and what course would it take ideologically from that moment forward. The Battle of Pickett’s Mill in Dallas Georgia is no exception to that rule, having been a significant Confederate victory; the battle itself was a devastating blow to the Union in which their forces were decimated in less than 30 minutes with a total of 1,600 casualties. Fought between Union General Oliver O Howard under the command of Major General William Tecumseh Sherman and Confederate General Patrick Cleburne Joseph E Johnston, this battle was General Sherman’s attempt at retribution for the Union’s Defeat at New Hope Church earlier two days ago. While the battle was a decisive victory for the Confederates and a blow to Union Forces, the war continued to rage on and it was not until may of that year that the war would end a long with the Confederacy.

The drama of the Battle of Pickett’s Mill began during the initial stages of the Union’s campaign into Georgia in the year 1864, the Union forces were much more unified than they had been in the past thanks to the leadership of General Ulysses S Grant and his focus on United Strategies as well as attention to a particular purpose for conduct. “No longer would armies in Virginia, Tennessee, Louisiana…conduct operations in their own timelines and schedules.”[1]Grant instead of attacking the Confederacy head on in a combined effort, instead opted to attack the enemy simultaneously in order to prevent one Confederate force from defending another. He planned to utilize three armies to attack the Confederacy, one large army from the Potomac led by General G. Meade and another army made up of three separate divisions under the command of Major General William T. Sherman. But while the Union was preparing to accelerate it’s campaigns against the south, the Confederate forces were just as diligent in preparing for the next move of their northern adversaries. To be specific, the Confederate General Joseph E Johnston and his Army of Tennessee became determined to hold the Confederate lines as much as his enemies were at taking them.

While the Confederacy was able to achieve victory in the Battle of Pickett’s Mill it was by chance that they were able to achieve such an accomplishment. This can be said, because although the Union’s leaders amassed a large military force their forces did not appear for a battle which the Confederacy was better prepared for. General Sherman opted to initiate his campaigns against the Confederacy by venturing into the hills of Paulding County, which presented several major problems for him and his forces because it was difficult in terms of supplying 100,000 troops with food in enemy territory and furthermore, the Union forces encountered resistance from rebel forces along the way. As a precursor to the events at Pickett’s Mill, the Battle at New Hope Church would be only a first step towards what awaited them throughout this ordeal.

On May 7th of 1864 the Union’s campaign for Georgia began with the standoff between the Union’s forces from the Cumberland and Ohio against Johnston’s Confederate forces along the Rocky Face Ridge outside Dalton. However, this was a rouse created by Sherman as instead of going up the steep slopes, he sent General James McPherson’s forces south to capture the town of Resaca. Upon realizing what has really happening Johnston abandoned Rocky Face Bridge and concentrated his forces on Resaca to which Sherman too followed and engaged in combat with each other for two days May 15th-16th that ended with Johnston’s retreat after Sherman threatened to blow up the railroad that gave a crossing over the Oostanaula River. Following their retreat from the battlefield, both forces spent a few days recovering from their incursion. However the Confederacy was on the run, while the Union remained hot on the trail. Following the events of Pickett’s Mill, the two forces would again converge for combat again at New Hope the course of this conflict, that the tide of war turned against Sherman’s forces and set the stage for what was to play out at Pickett’s Mill.

Following the Confederate retreat from the town of Resaca, Sherman was determined to deliver another blow to the impeding Confederate forces. Upon being informed of the Confederates’ location at Allantoona Pass, Sherman converged his forces upon the enemy’s location. While en route towards the Confederates’ location, Sherman’s venture into the hills of Paulding County presented problems for his regiment. Specifically; they were knee-deep in enemy territory but lacked the amount of food for all 100,000 soldiers. To make matters even more challenging for Sherman and his unit, as the length of his journey grew, the lines of wagon trains took more men to guard. Around the time the Union troops reached the halfway point towards the supported Confederate location, Sherman’s Unit was attacked by rebels at a Methodist Church called the New Hope Church. This was brought about, due in part to Johnston being informed about the incoming Union force ahead of time and planned to shift his army in the way towards Sherman’s path at the New Hope building.

To counter the rebel’s offensive at New Hope, Sherman ordered his troops to outflank the Rebels before they were able to fortify the position. Believing the rebels to only be a token force Sherman ordered his second-in-command Joseph Hooker to attack with his unit of troops called the XX corps. While this initially looked as if Hooker was pushing the Confederate units back, he as well as Sherman came to realize that the main line of Johnston’s forces had yet to be revealed. Caught off guard by the Confederate’s folly, Hooker and his units were unable to counter the ambush as a result of the difficult terrain which surrounded the battlefield. To make matters worse, troops suffered from a lack of rations. Trying to improve the situation for his forces, Sherman ordered Major General Oliver O Howard to attack the Confederate Army from its left flank. Both, Howard and Union General George Henry Thomas of the Army of the Cumberland scouted the area of the vicinity named Pickett’s Mill and opted to attack what appeared to be the end of the Confederate lines.

Upon discovering the ending of the Confederate forces in the vicinity of Pickett’s Mill, the Union forces concentrated all its’ point of attack towards the end at Pickett’s territory. While the Union hoped this change of strategy would help, instead it would only end in disaster for them. After being given orders by his superiors, Union Major General William B Hazen knew that an attack was a serious mistake but nevertheless carried out his orders to assault the rapidly fortifying Confederate line. However, as his men had begun to advance upon the Rebel line, some of his men became confused by his orders only to end up further away from the intended target. Furthermore, Hazen’s troops came under incredible fire by a dismounted Confederate cavalry from the other side of Little Pumkinville Creek. Hazen and his unit soon as a result of the firing made by Confederate troops Hazen and his Unit soon became stranded in the middle of the more open areas of the battlefield with their reinforcements being delayed by the thick underbrush. By the time Hazen realized that his reinforcements were never coming, Hazen was given no other option except to retreat. Following Hazen’s retreat, around 6:00PM General Thomas J Woods ordered a second attack only to be routed by Cleburne’s men. By around 10:00 that evening, Confederate forces led by Brigadier General Hiram B Granbury began to advance to which the federalist forces responded to with a single volley of fire only to withdraw shortly after. With the Union’s retreat, the Confederates achieving victory in the battle and a loss of troops on both sides numbered to a total of 1,400 men combined.

Following the conclusion of the battle, the Confederate forces had won a decisive victory over the Union forces and it became the first time during the course of Sherman’s Atlanta Campaign that he and his forces faced the possibility of retreat. As a result of his defeat at the battle, Sherman had to return to the railroad in order to resupply his army to retaliate in which he did on May 29th when he began to move his troops along the Dallas line from the east and north. Today the site of the battle is now a preserved historical site that maintains some of the authentic qualities that were present at the time of the actual battle. Furthermore, the site hosts several special events such as “Christmas at the Cabin,” artillery demonstrations on the battles’ day of commemoration, free candlelight tours and other attractions to help keep the memory of the battle as well as the legacy of the Civil War in the hearts of the American mindset.

[1] The Battle of Pickett’s Mill: Along the Dead Line, Brad Bufkovich, pg.19.