An historic antebellum house based on Greek Revival architectural design that was constructed prior to the year 1836. During the course of it's existence, the house served as headquarters for both the Union and Confederate forces during the American Civil War. While serving as headquarters the plans for the Battle of Shiloh were coordinated during the duration of the Confederate occupation. Because of it's role in the battle, the house was sparred from destruction as the rest of the city was burned during the Battle of Decatur.

An old photo of the house taken probably around the 1930s. 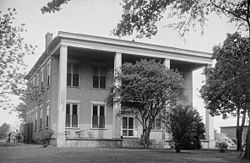 A modern front-view of the house. 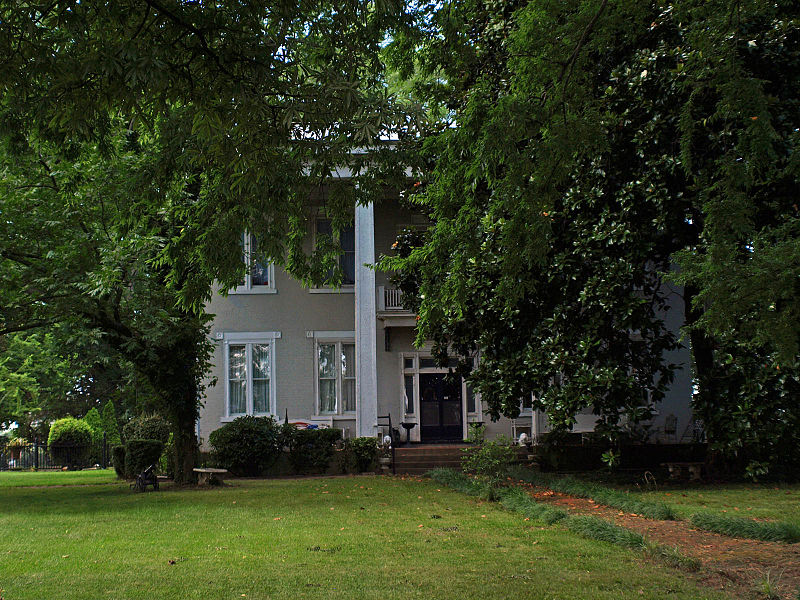 A modern side view of the house. 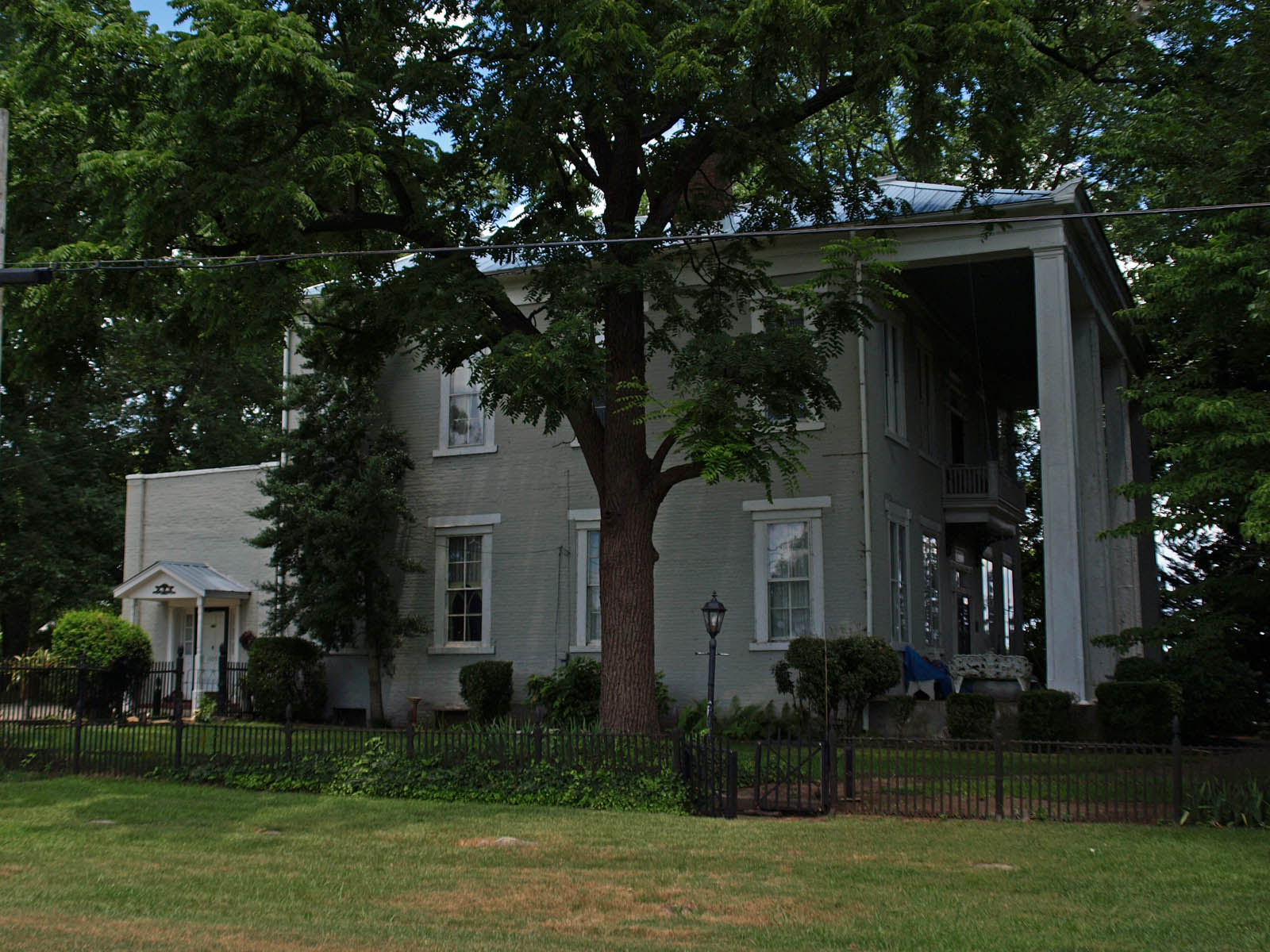 Throughout the course of the American Civil War, there were several buildings that were converted to military bases as a result of the sudden action that came up as a result of the battles. One of these homes which served a large purpose during the course of the Civil War was the Rhea McEntire House in Decatur, Alabama which was utilized as a base by both the Union and Confederate forces. The house itself although only used as a temporary military post by the conflicting forces, it became an integral piece of history due to its’ role in planning the event that would later be known as the Battle of Shiloh. It was this factor alone that prevented the house from being obliterated during the Battle of Decatur in October of 1864. Although the Civil War is long over, the house still represents not only a time prior to the destruction caused by the war but also an authentic piece of history that helped change the course of American history.

Prior to the events that came out as a result of the Civil War, the town of Decatur itself was a bustling and affluent town that came into existence around June 16th 1820. It was inhabited by primary settlers who were drawn to the fertile soil of the surrounding valley and the easier access to other cities. While these two traits were predominant features of Decatur, what really brought prominence to the city occurred in the year 1836 when the town was selected as part of the first railroad out to the west. As a result, of this opportunity, the economy and the population expanded to an enormous degree. In addition to the increase of the population and economic growth, there was also a spike in increased industry and therefore made Decatur into a major industrial hub for the state of Alabama. Because of the increase in industry for Alabama, there was a need for big businesses which in turn brought in a branch of the state Bank of America in 1833. While the bank remained open for a good nine years, by 1842 the bank closed in 1842 when it was unable to reform from the overwhelming debt of one million dollars. Although the bank was closed it still remained in Decatur and like the Rhea McIntire House served as a hospital during the drama that was soon to unfold from the Civil War.

Following the events that culminated in the breakout of the American Civil War, the city of Decatur witness a significant amount of drama that not only changed history but became a stepping stone for the city to advance farther into the new post-war America. Because of its’ location on the Tennessee River and its’ connection to the newly built Tuscumbia Railroad (or the Memphis and Charleston Railroad as it was known during the time) Decatur was a position of strategic importance during the Civil War to both sides. Initially settled by the confederacy during the course of the early stages of the war, the Confederate forces established their headquarters in a mansion alongside the shoreline of the Tennessee River called the Rhea McEntire House. Originally called the Burleson House, the structure was first built sometime prior to the year 1936. The mansion itself, physically boasts an astounding antebellum look comprised of Greek-Revival styled architectural design which extends as high as two stories up. Throughout the duration of the Civil war, the house would be the site where the Confederates laid out the plans for the Battle of Shiloh which would play out as a major battle for the war.

Following defeats at both Fort Henry and Donelston in February of 1862, General Johnston withdrew his forces from Eastern and Mid Tennessee and had them retain their positions in Western Tennessee, Alabama and Northern Mississippi. While on the other side of the spectrum, Union Major General Henry W Halleck gave orders to Major Ulysses S. Grant to remain at his position in Fort Henry and then ordered Brig. General C.F. Smith to capture damage and destroy railroads throughout the southwestern portion Tennessee. Grant was then ordered by Halleck to advance his army towards the Tennessee River and on March 14th he and his forces established their base on the eastern banks of the river itself. Along with Grant, the Union forces would be joined with that of another army led by Union General Don Carlos Buell from Ohio with a total of 62,000 soldiers. The main objection for the Union in Grant’s case at least was the rail center of Corinth, this can be said because it was vital strategic position the Union due to its’ possession of the Mobile and Ohio railroad and its’ link to the city of Mobile Alabama, the Ohio River and the Memphis and Charleston Railroad. However, while it appeared that the Union had an advantage; Buell’s forces had not appeared at the rendezvous point, due to rains and muddy roads. The Confederate forces meanwhile, were about to play their move to counteract and hopefully repel the Union forces.

While the Union forces were awaiting the arrival of Buell’s reinforcements and organizing their positions for the battles ahead, their Confederate adversaries were also hard at work preparing for what lay ahead. The Confederate leadership during the duration of this campaign was under the leadership of General Albert Sidney Johnston who led a Confederate Army from Mississippi and General Pierre Gustave Toutant Beauregard as deputy commander. To attack their enemies and keep them away from the town of Corinth, Johnston and Beauregard planned to attack with four of their military corps in successive lines within these first two lines brigade commanders would follow up with deploying their regiments. While this strategy seemed like a brilliant idea to begin with, when it was executed, the Confederate forces were unable to act in this situation. Specifically, there was a large amount of confusion among the troops as to what course of action they were to take because their units became helplessly mixed with the corps commanders.

Throughout the course of the Battle of Shiloh in April of 1862, the Confederacy faced their northern adversaries with less successful resources compared to the Union’s supplies that included highly industrialized weapons as well as medical equipment or supplies. To make matters worse for the Confederacy, both Beauregard and Johnston had no unified plan of action to take during the course of the Battle of Shiloh, the Confederate forces were still able to mount an assault that was devastating caused several Union regiments to retreat. The Union forces began to slowly lose ground and were forced to retreat back to the Shiloh Church. The Confederate forces continued to push the Union forces back throughout the course of the first day of the battle. However by that same evening, the Union forces were joined by reinforcements led by General Lew Wallace and Don Carlos Buell and by the following day the Union began to turn the tide of the battle.

The following day the battle began to shift in favor of the Union due to the reinforcements led by Buell and Wallace. As a result of these reinforcements the Confederate forces were now outnumbered and were slowly pushed back. As the battle continued to progress, the Confederate forces launched a series of counter offenses that although caused the Union to be held back for a short time were unsuccessful in causing the tide to turn back in their favor and as a result depleted their resources. Because the battle had caused the Confederates to lose their resources, Beauregard withdrew his forces while holding the line against the Union to prevent them following up close behind. By 5PM of that same day, the Union had broken through the remaining Confederate resistance on the Corinth Road with General Wallace leading the charge against the retreating Confederate forces only to have his unit recalled due to the exhaustion among the Union Soldiers and by the time Sherman’s forces returned to their camps at Shiloh, the battle was over.

Two years following the Battle of Shiloh in October of 1864, the town of Decatur became a battlefield of another battle during the course of the American Civil War. In over the course of four days the Union forces led by Brigadier General Robert S. Granger went up against the forces of the Confederacy led by General John. B Hood. Hood, known for being able to hold of Sherman’s troops from coming into Atlanta, hoped to achieve a quick victory over the impeding Union Forces so as to not only repel the attack itself, but to also provide the Confederacy with the turn around that they needed to reverse the course of the war in their favor. Furthermore, the Union forces saw the battle as a means for them to acquire the railroad and national road that was situated to the north of the city in order to provide the Union access to the travel routes needed for the Confederacy to send supplies and troops to where they needed to be. During the course of the fierce four day battle, the Union Army mustered a force of merely 5,000 men compared to the Confederate forces’ 39,000 troops. Yet despite the overwhelmingly larger force in which the Confederates’ possessed, they eventually began to suffer from a lack of resources that were attributed to Hood’s insistence of a rapid movement of his troops. Furthermore his forces suffered from a lack of communication with their superior officers such as General P.G.T. Beauregard which caused trouble for Hood and his forces to obtain the resources needed such as food or clothing. The lack of adequate supplies, combined with the tough resistance by the small Union forces during the course of the battle and the arrival of Union reinforcements by gunboats; caused the Confederate forces to lose both the battle and the city of Decatur.

In terms of the Rhea McEntire House, during the course of the Battle of Decatur, the House was spared from destruction by the Federal forces because of its part in the Battle of Shiloh. In the years that followed the American Civil War, the Burleson family who owned the house during the course of the war sold it to former Union Soldier Jerome Hinds in 1869. By 1895 the house was later sold to R.P. McEntire and was therefore given the name the Rhea McEntire House. Throughout the course of its time in existence, the house served multiple purposes that helped shape the course of both its community and history. Specifically, because of its’ use as a base during the course of the Civil War, it was where the plans for one of the bloodiest battles from the war were conceived. In addition to its’ function as a base, the house also served as another courthouse to the town of Decatur while the actual courthouse was being constructed. Finally, because of it being remained unharmed during the events that took place during the Battle of Decatur, the Rhea-McEntire house remains as a reminder to all of the look of a time long since passed and a place that continues to hold a great amount of importance in the American memory as to what so many fought and died for.