Zone 1 of 6: Exterior and Parking Garage

Located on the northeast corner of 10th Street and Baltimore Avenue in the historic former First National Bank building, the Central Library serves as the main resource center for the Kansas City Public Library system. The Library has been at its current location since 2004 and anchors the downtown Library District. Both public and private funding were used to convert the old bank building into a library. The exterior architecture is original, and elements of the interior bank lobby, named Kirk Hall in honor of businessman and Library advocate Phil Kirk, were restored to their original grandeur. Visitors to the Central Library will find many interesting spaces including a lower-level bank vault converted into a 28-seat movie theater, the third-floor Grand Reading Room with skylights, the fifth-floor Rooftop Terrace, and two formal art galleries. 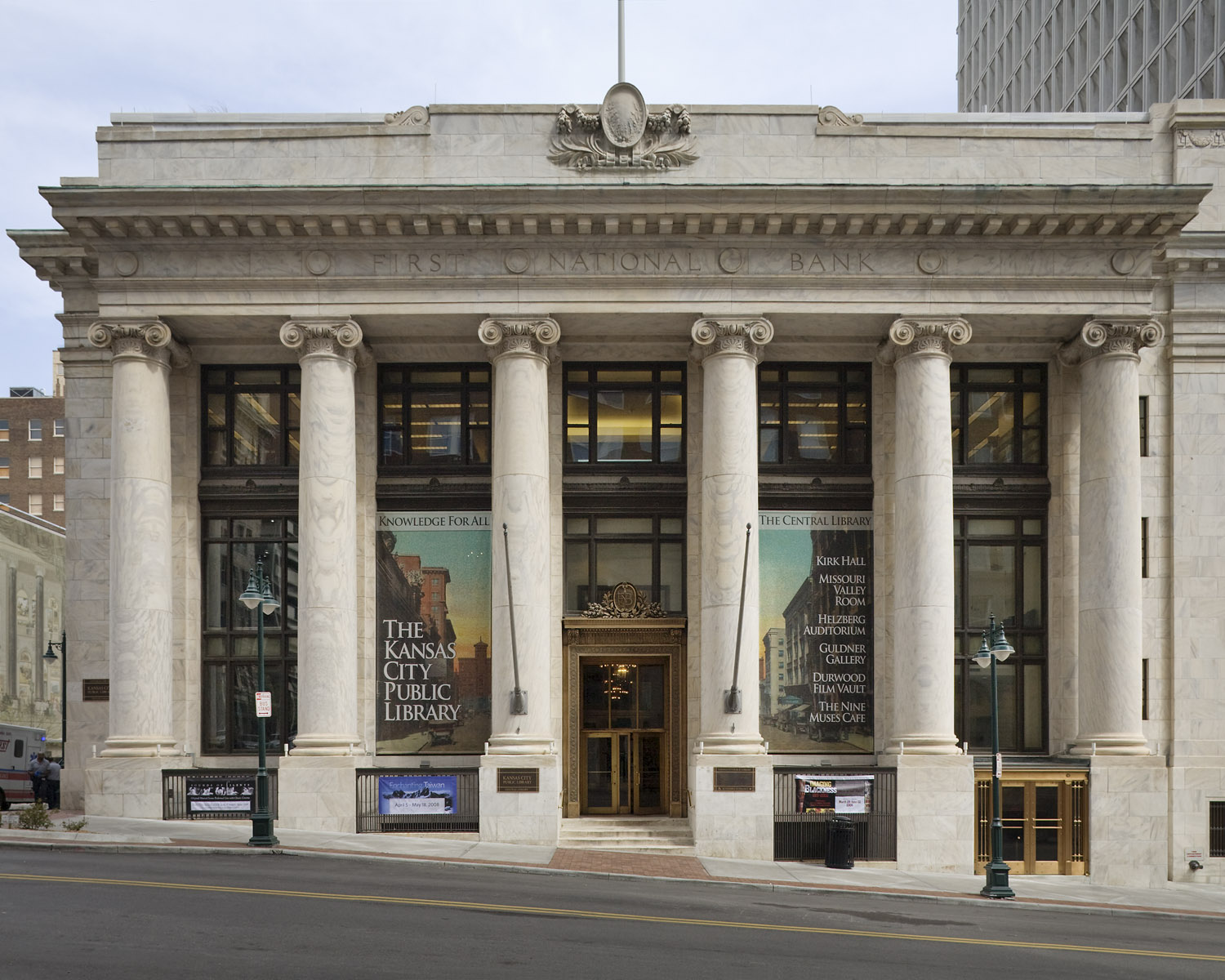 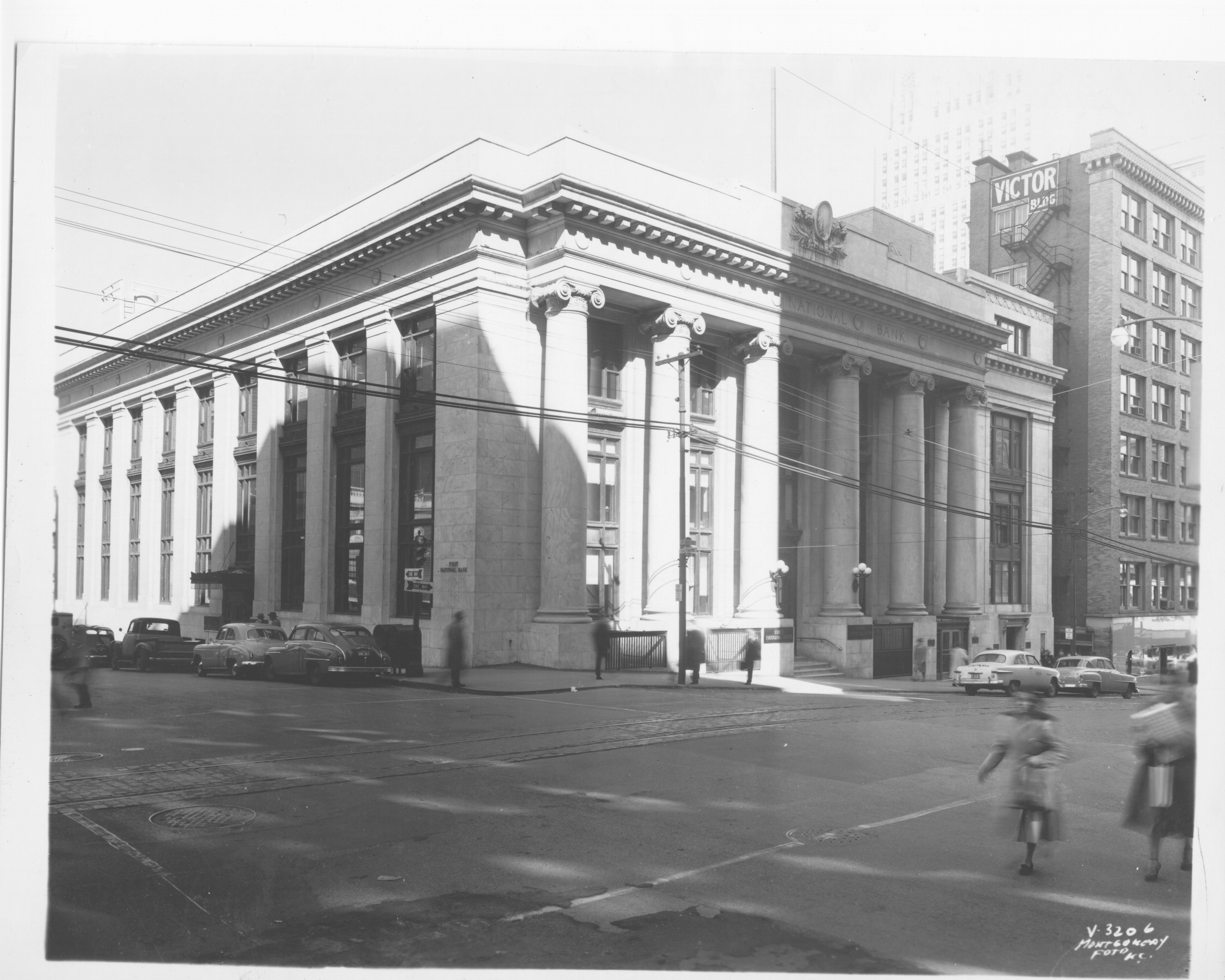 Kirk Hall as it looked before renovation 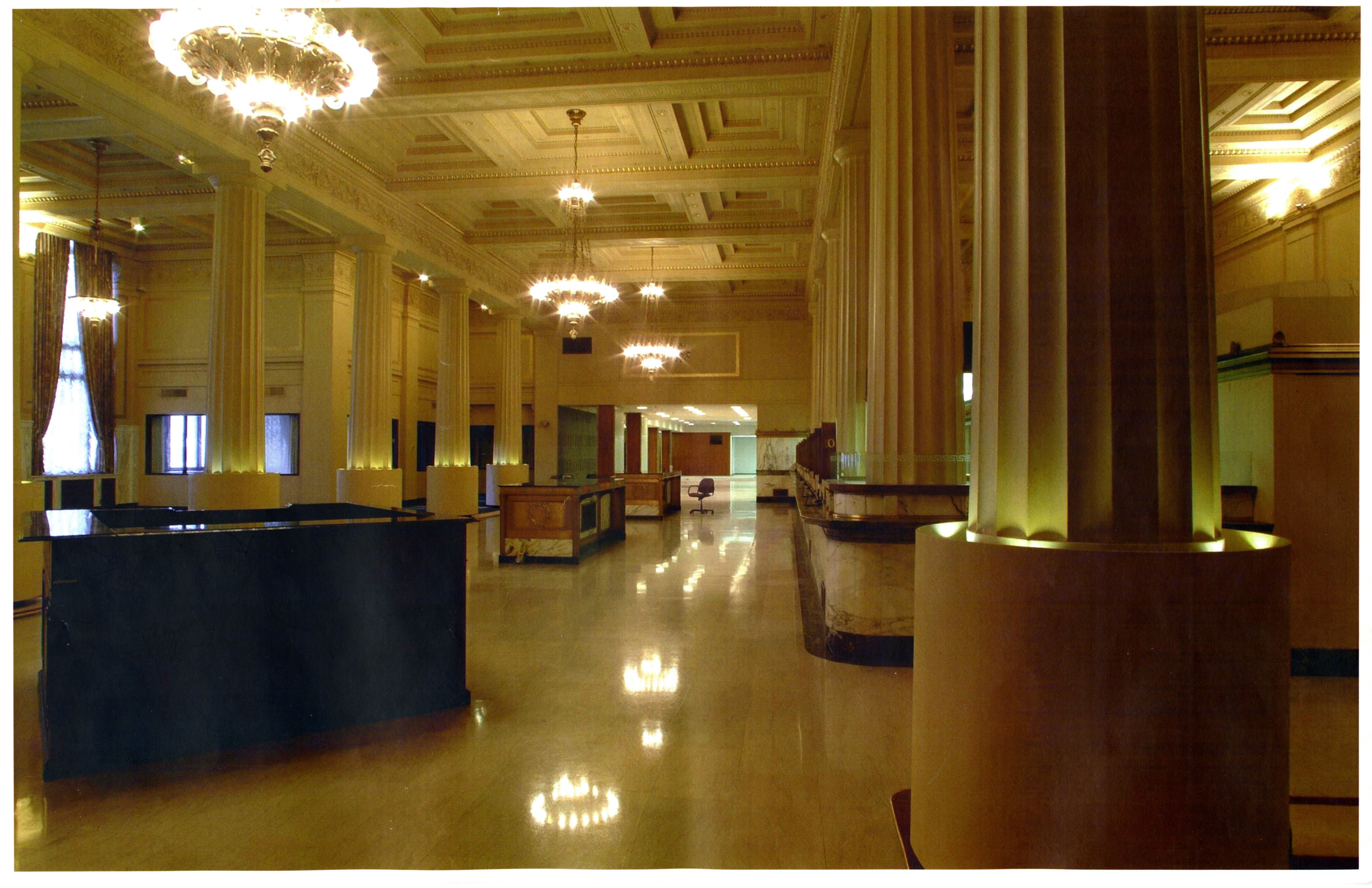 The Grand Reading Room during renovation 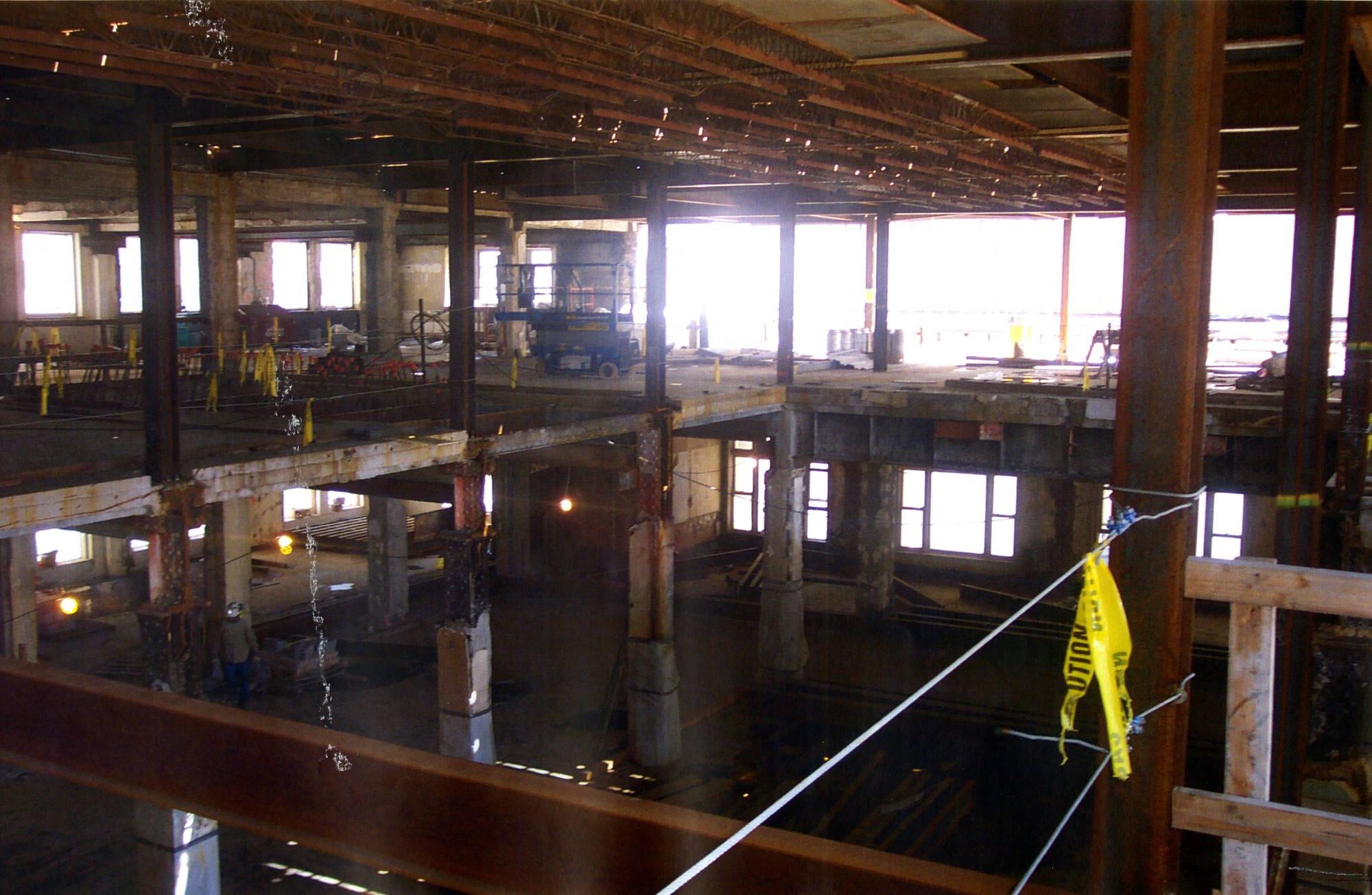 View of the library's current fifth floor during renovation 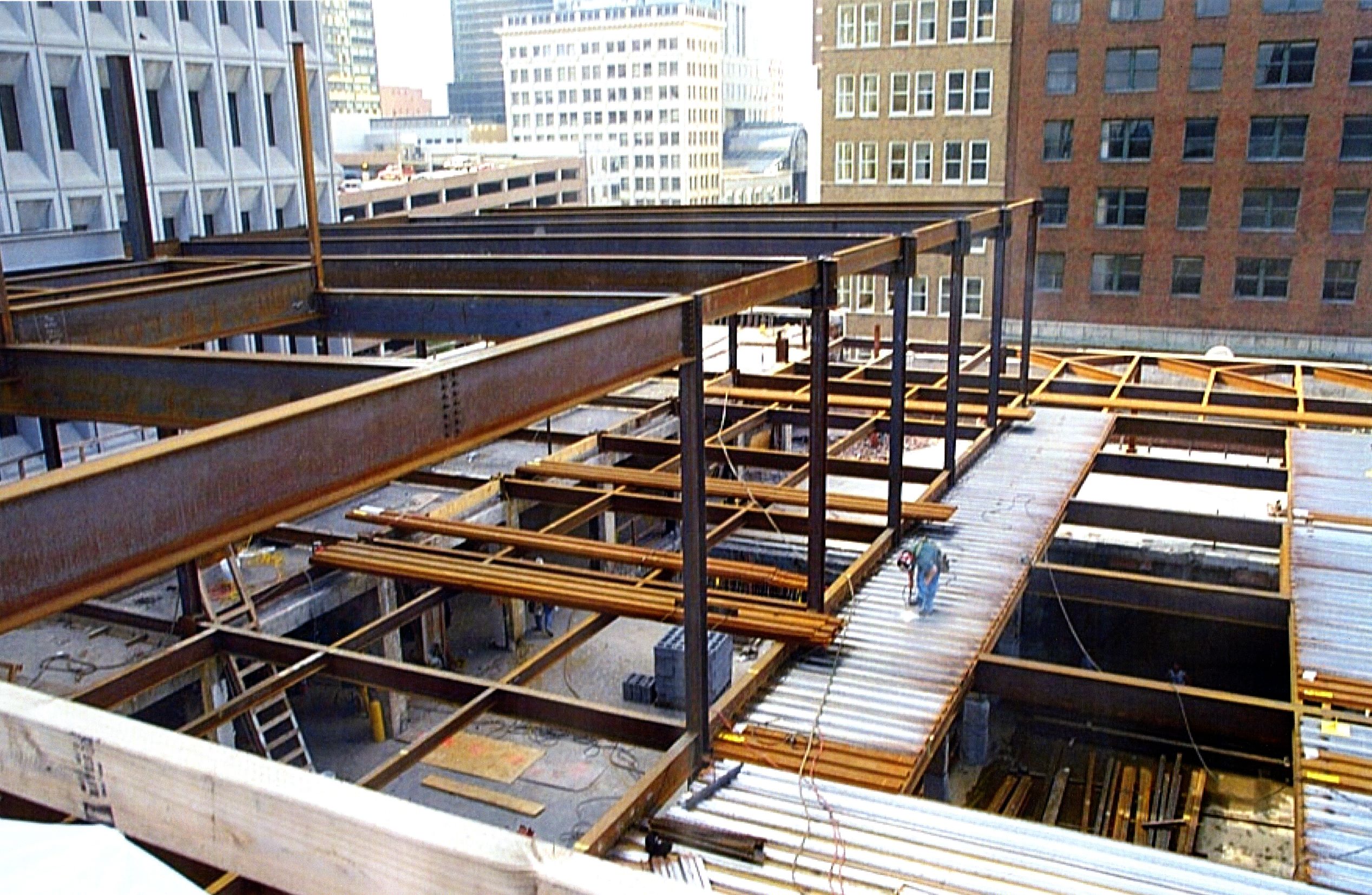 The 3rd floor stairs during renovation 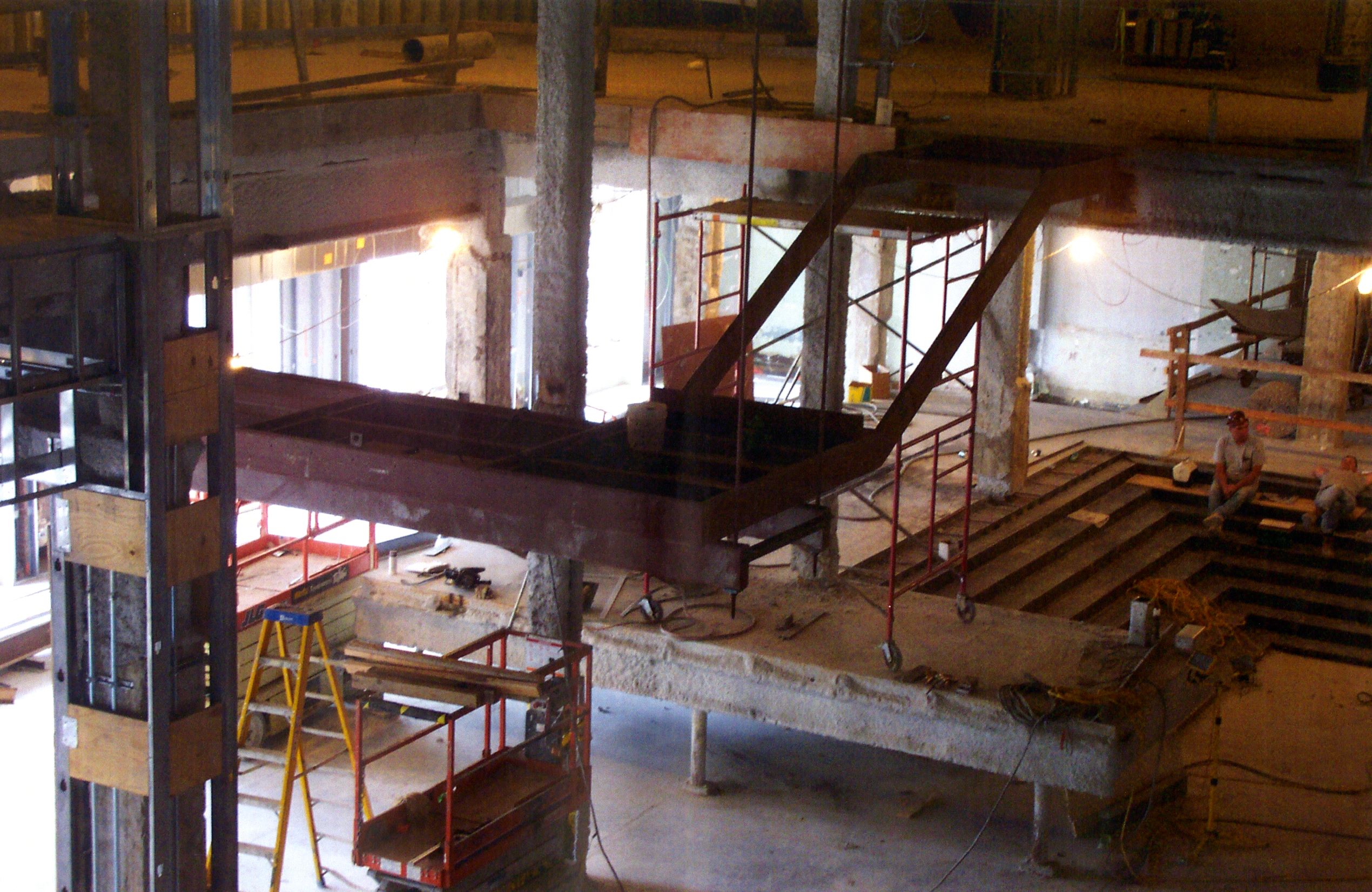 Since 2004, the former First National Bank building at the corner of 10th and Baltimore has been home to the Central Library. The bank was officially organized on March 1, 1886, with an authorized capital of a million dollars and a paid capital of $250,000, Colonel James Abernathy and James Lombard opened the original First National Bank in downtown Kansas City in the Junction Building, a former building that is now home to a fountain that divides Main Street. Kansas City was only 33 years old at that time as Missouri officially incorporated the City of Kansas on March 28, 1853.The bank grew along with the city it served, leading to the completion of this bank building in 1906 as a three-story structure featuring elements of the Neoclassical and Chicago School style of architecture. The front is dominated by a row of six Ionic marble columns, each 34 feet high and weighing approximately 48 tons, as well as intricately detailed, 13-foot bronze doors. The deliberately imposing facade conveys permanence and security, desirable traits for a financial institution when the building was constructed.

A fourth floor was added in 1926, and a north expansion was completed in 1964. A succession of banks occupied the space until 1999, when Bank of America consolidated its Kansas City offices and vacated the historic building. By that time, the Kansas City Public Library had outgrown its headquarters inside the Board of Education Building at 12th and McGee streets and leaders began searching for a new location for its main library. Through a public-private partnership headed by the Downtown Council, and utilizing funds from federal, state, and municipal sources, as well as corporations, foundations, and individuals, the Library raised the nearly $50 million needed to convert the old bank building into a dynamic, urban library. HTNB was the principal architect for the project and began renovations in 2001. The Central Library was the cornerstone of a newly established Library District, which spans from Main Street west to Baltimore Avenue, and from 8th to 11th streets. A public grand opening was held on April 12, 2004.

“The Commerce of Kansas City in 1886; With a General Review of its Business Progress,” 1886, p. 28-30, online at library.si.edu/digital-library/book/commerceofkansas00howe