Constructed between 1991 and 1997, the George Bush Presidential Library and Museum is home to the archives of the George H. Walker Bush. The institution offers a variety of exhibits related to the life and presidency of George Bush, as well as the presidential archives that include two million photographs and 45 million pages of documents. The archive is part of the National Archives and Records Administration's Presidential Libraries network.

The museum includes a variety of permanent and rotating exhibits drawn from the museum's holdings of over 100,000 artifacts and two million photographs. 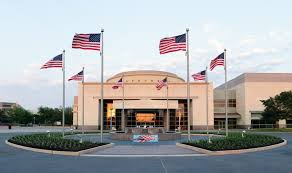 The museum's permanent exhibits closely look at each important development in Bush's life that led him to reach the presidency. The exhibit on his service in WWII includes a replica 1944 TBM Avenger plane that he flew. The exhibit describing his courtship and marriage to Barbara includes a replica of her wedding dress. Other exhibits look at Bush's role as Congressman, Ambassador to the U.N., chairman of the Republican Party, head of the CIA, Vice President, and of course, as President.