The first monument of an African American to be erected in Louisiana, this 1927 statue depicting a deferential man referred to as "Uncle" has long been offensive to Black citizens in Baton Rouge given the intent behind its creation. Once located on the riverfront in Natchitoches, protests by African Americans in the late 1960s led to its removal. The statue is titled "Uncle Jack" and is now located at Louisiana State University's Rural Life Museum. 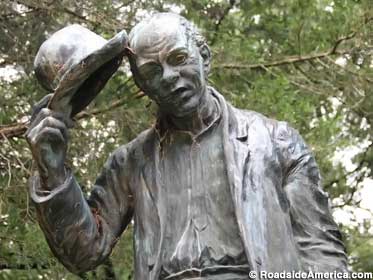 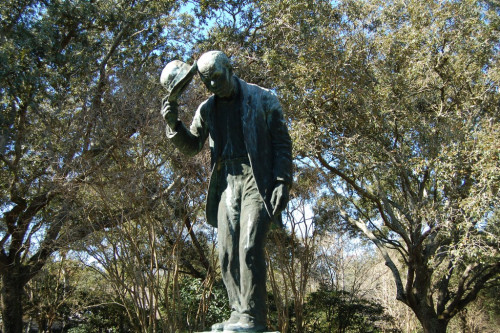 The statue depicts an elderly African American man tipping his hat and bowing. This eight-foot tall bronze statue was created in 1926 by Hans Schuler, and was commissioned by cotton planter and businessman Jackson Lee Bryan. The statue was dedicated in 1927 and located in downtown Natchitoches, Louisiana at the riverfront. The statue went by several different nicknames including “The Good Darky” and “The Faithful Darky,” both references to enslaved persons who were regarded as "good" because they did not challenge their bondage.

The inscription of the original plague read, "In Grateful Recognition of the Arduous and Faithful Service of the Good Darkies of Louisiana." While the deeply racist meaning of the state was clear to African Americans, many whites saw the statue as a sign of their appreciation for people of color. Newspapers such as the New York Times and the Boston Globe even proclaimed the progressiveness of the white citizens of Natchitoches for dedicating the statue. The creation of post cards soon followed, as white people nostalgic for a moonlight and magnolia version of antebellum history eagerly gravitated to the statue as proof that enslaved people were treated well and regarded whites with kindness and appreciation. This interpretation reflected a society divided by the color line where African Americans were expected to act deferential just as the man portrayed in the statue.

The liberal and progressive sentiments towards Uncle Jack began to diminish. The views about Uncle To this day, some whites maintain that the depiction of "Uncle Jack" bowing was just a gentlemanly gesture of the era, and that no disrespect was meant. The NAACP began protests calling for the removal or destruction of the statue during the 1960s. From the perspective of civil rights activists, the statue was a relic of slavery and reflected racist labels attached to African Americans as "uncles" and "aunties" by whites who pretended that the people they enslaved were treated like family.

In 1968, the Mayor of Natchitoches responded to increased concern that protesters would make good on threats to destroy the statue by removing it. Jackson Lee Bryan’s daughter Joy Bryan Ducournau placed the statue in storage for several years. The Smithsonian contacted Mrs. Ducournau in an attempt to have her place the statue with them for interpretation, but she declined the offer. Instead, she decided to place the statue with the Louisiana State University Rural Life Museum in 1974.

The statue was originally placed at the entrance of the museum, but is now located in the rear of the museum and accompanied by several signs that explain the context behind the statue's creation. The museum’s hope is that this artifact will become part of a series of artifacts depicting attitudes towards race in Louisiana.