The Village of Columbus and Camp Furlong was the site of a raid led by Pancho Villa in 1916. The site, declared a National Historic Landmark in 1975, includes portions of what is now Pancho Villa State Park. The raid by Villa led to an expedition into Mexico led by General John J. Pershing that failed to capture Pancho Villa and his men. The 24th Infantry remained at Camp Furlong and in 1919 were called to assist in removing Villa's troops from Ciudad Juarez. Ruins of Camp Furlong can be found in the state park which also contains a restored former customs building that houses exhibits about the attack of Pancho Villa and the attempt to pursue and capture the raiders. 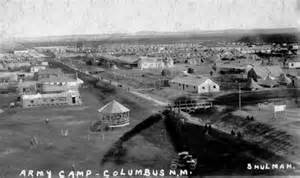 The state park includes a visitors center and other buildings with information about Pancho Villa's raid. 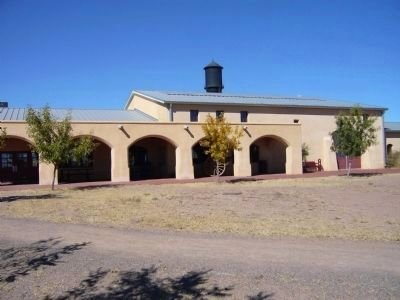 On March 9, 1916, Camp Furlong was the Headquarters of the 13th U.S. Cavalry commanded by Colonel H.J. Slocum. The 13th Calvary was on outpost duty along the New Mexico border when Pancho Villa and approximately 485 Mexican revolutionaries under his command crossed into the United States and attacked the border town of Columbus, killing 10 civilians and 8 soldiers. Lt. Lucas of the machine gun troop was able to set up machine guns in the main area of the town and directed heavy fire against the raiders effectively ending the raid and sending Villa and his troops back across the border. Without consulting the Mexican Government, President Wilson ordered a punitive expedition, led by Gen. John J. Pershing, into Mexico to capture Villa and prevent further raids across the international border.

The 1916 Punitive Expedition was a disproportionate response to the attack by Villa and his 500 revolutionaries. With a force of 12,000 men equipped with aircraft and motorized transport General Pershing pushed over 400 miles into Mexico in pursuit of Villa. The American intervention caused an upsurge in Mexican Nationalism and prompted the interim president, Venustiano Carranzazo, to dispatch units of the Mexican federal army to engage the U.S. troops in Mexico.
The American incursion into Mexico caused a flow of refugees back into the United states prompting the government to send units of the regular army units and federalized Units of the National Guard to maintain protection along the border. The authority to accomplish this was the newly legislated National Defense Act of 1916. Almost overnight the camp became a large military installation for the defense of the border with Mexico. Following the end of the Mexican Revolution in 1917 the need for a large border camp lost its importance and by 1923 all troops had been removed from the camp.

American Military History: A Survey From Colonial Times to the PresentNov 3, 2006 by William T. Allison and Jeffrey G. Grey