James Vanderipe settled on the Braden River with his wife and family in the early 1840s. After a few years, he left to return to Kentucky and disappears to history. His wife, Nancy Vanderipe, moved to Key West and married James Cunliffe, an English blacksmith and wheelwright. Around 1854 they returned to Manatee where they became closely associated with the Burts family who arrived at roughly the same time. Sara Vanderipe and William Vanderipe, children of James and Nancy Vanderipe, married Wilbur Burts and Eliza Burts respectively. William became a leading merchant and store owner as well as a county commissioner. He was also a citrus grower and founder of the Bank of Manatee. Another Vanderipe son, James, became the inspector of marks and brands for the Myakka area. He married Flora Ellen McLeod at Gamble Plantation during Christmas, 1862. She died in 1871 and he married Sarah Lee, daughter of pioneer Rev. Edmund Lee in 1872. Sarah died in 1878 and was buried in the Lee Family cemetery. Rev. Lee disliked Vanderipe so much that a year later when he died, Lee refused to let him be buried next to his wife. Instead, James Vanderipe was buried across the street in what is known as the “Lone Grave.” 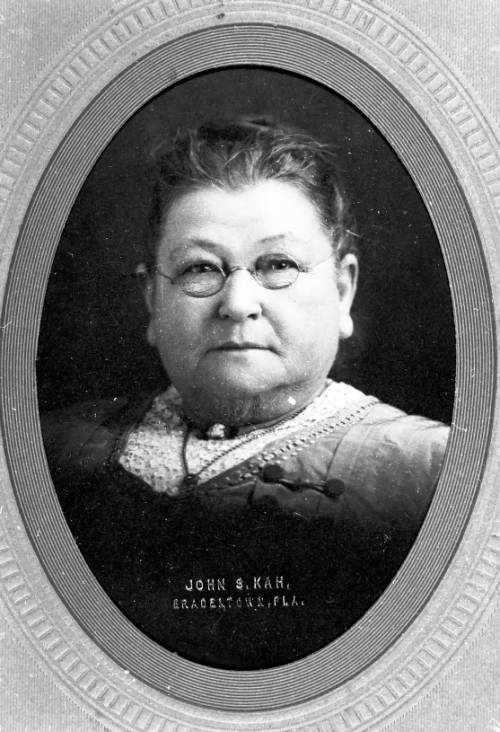 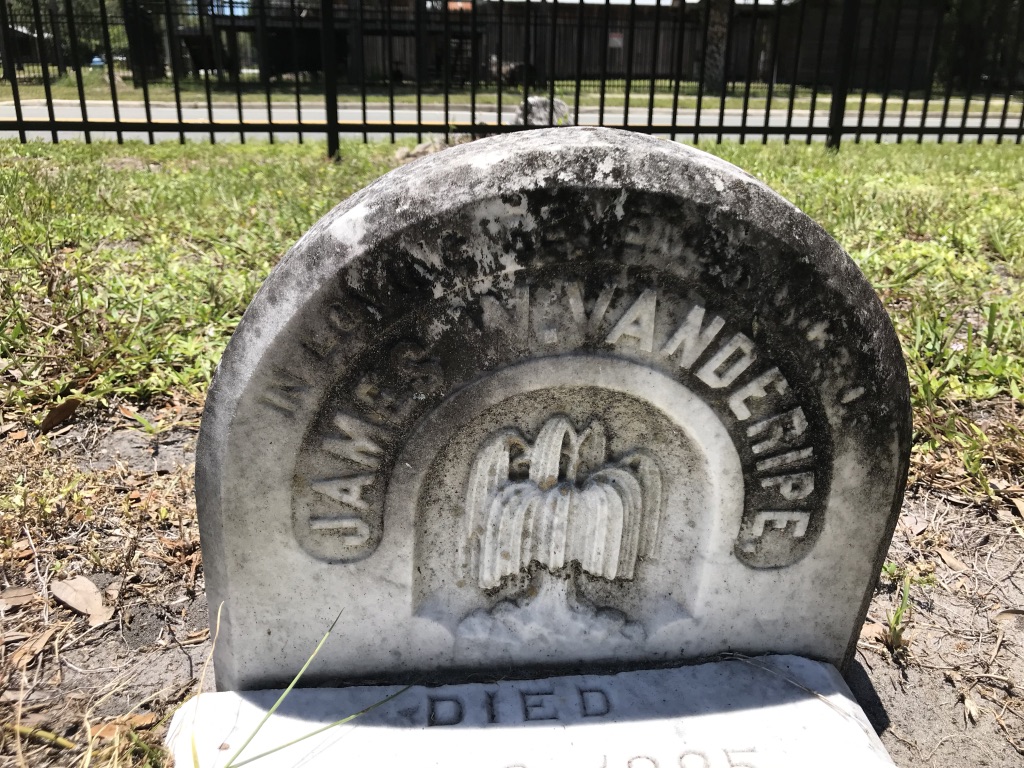 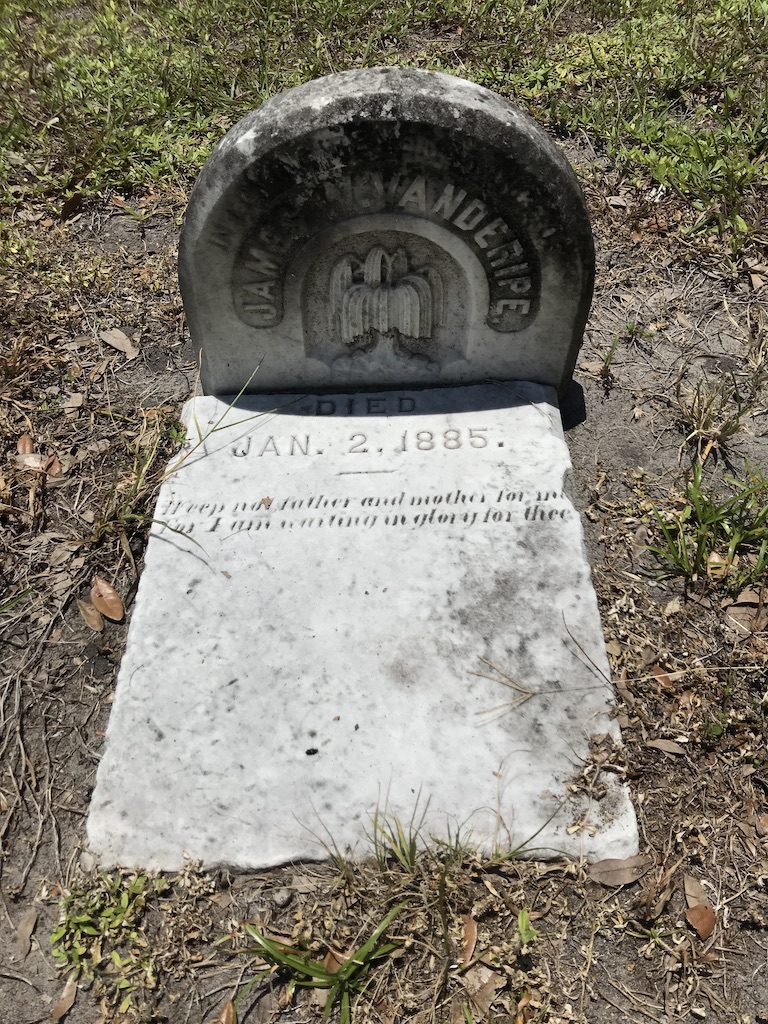 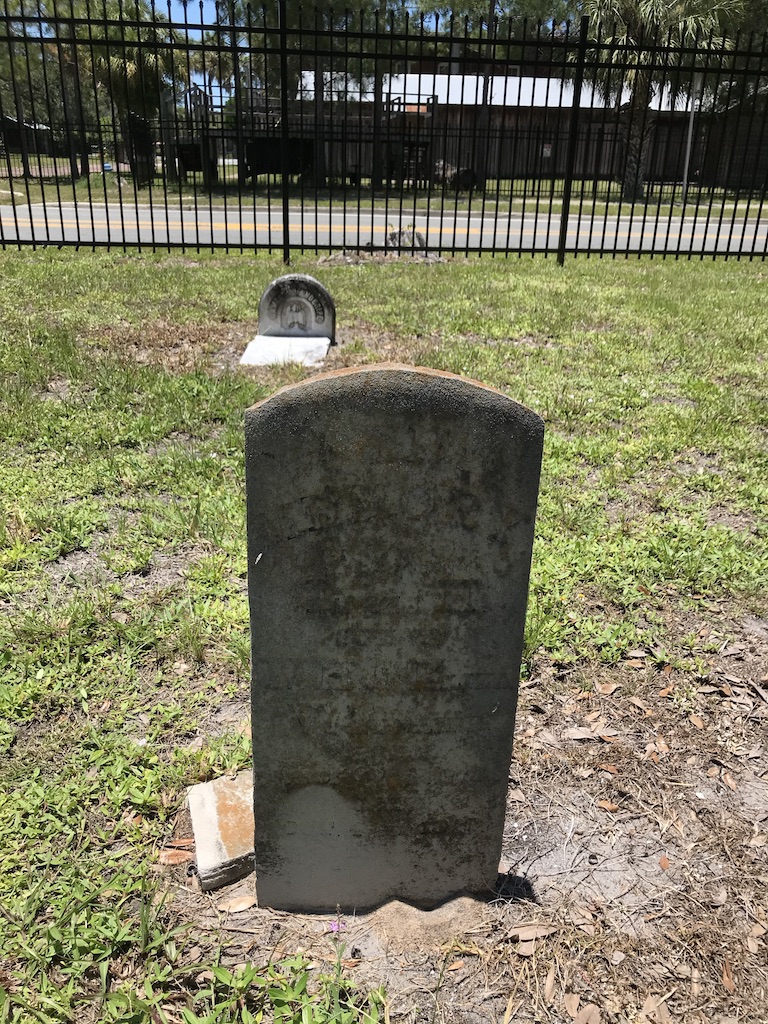 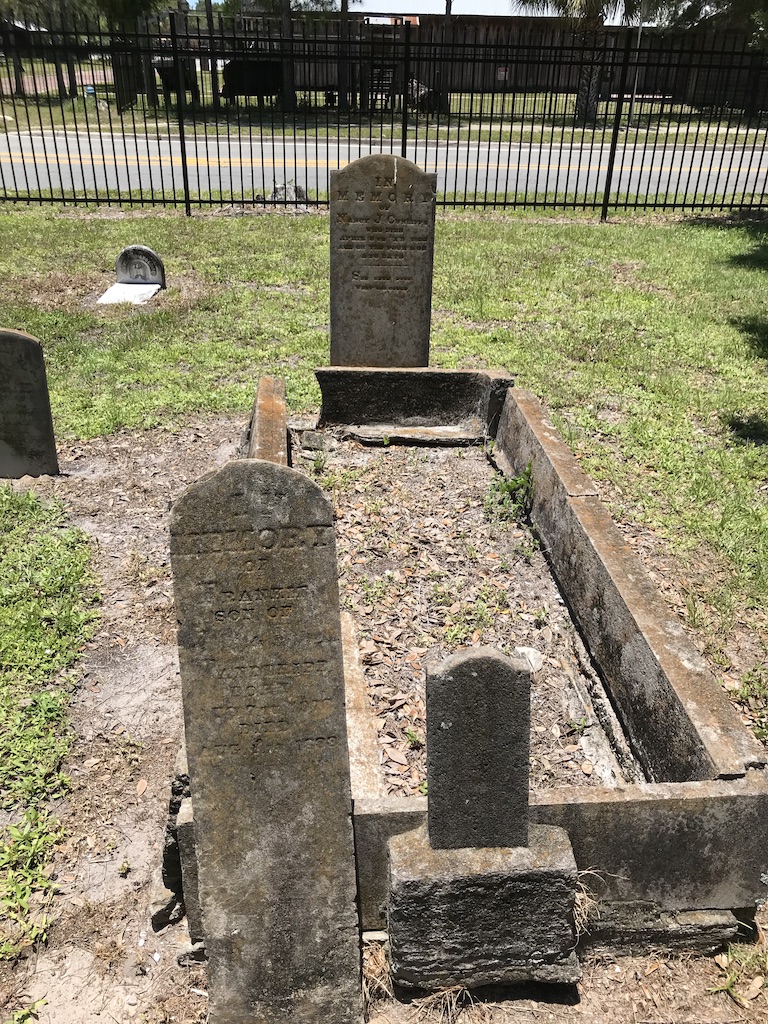 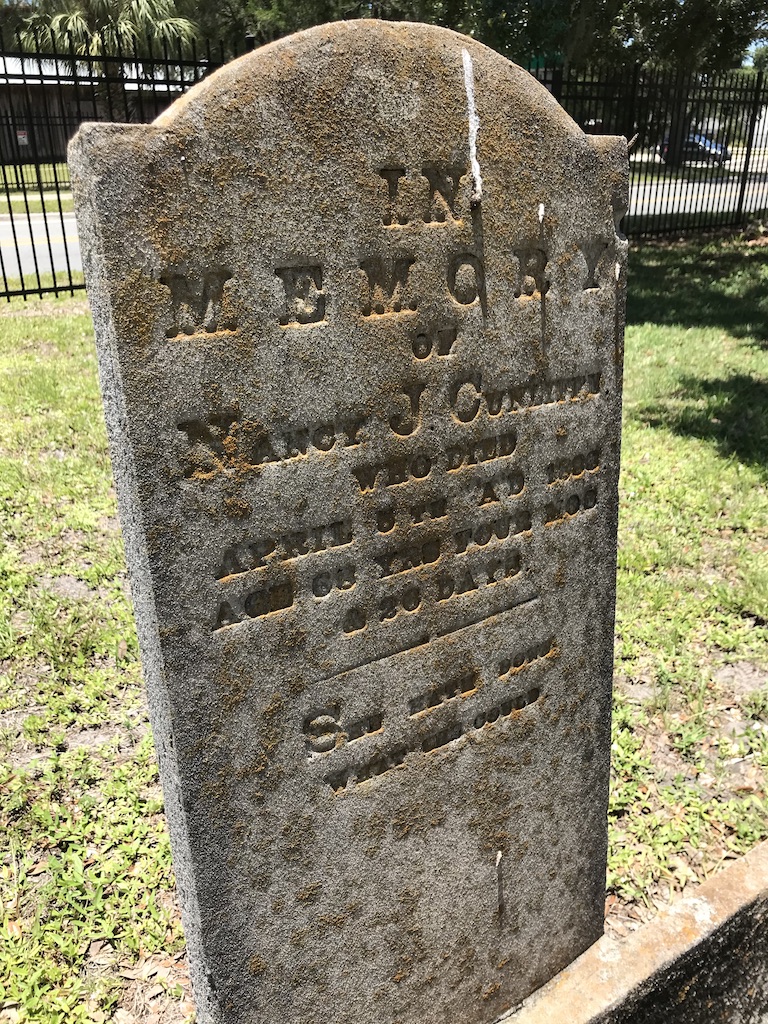 On the small headstone belonging to James Vanderipe, you’ll notice that there is a depiction of a willow tree. Weeping Willows, as seen on this headstone, were a common feature of gravestone iconography through much of the 19th Century. Iconography is the visual images and symbols used in cemetery art. Throughout the nineteenth century there was a resurgence in interest of ancient Greece and carried Greek style into funerary art. Willows appeared frequently in Greek mythology, especially in relation to the Underworld and cemeteries. While weeping willows represented mourning, they also often represented immortality.

If you look at Nancy Vanderipe's headstone, you'll notice that unlike Permelia’s headstone where they inscription is carved, Nancy’s inscription is actually pressed into the cement. Headstones such as this, typically were produced local.

Nancy and her first husband, James Vanderipe, arrived in Manatee from Kentucky in 1843. The couple had five children, and settled on the north side of the river. Several years later, James Vanderipe traveled by schooner bound for New Orleans. After this, there is no record of what became of him. Some accounts say he was traveling to Kentucky for business, others simply say he was dissatisfied. While others believe that he may have contracted Yellow Fever while traveling.

Shortly after the mysterious disappearance of her first husband, Nancy remarried. She and her second husband, James Cunliff, who was a blacksmith and sea captain, moved with four of her children to Key West. Nancy’s oldest daughter, Mary, refused to go. Mary, was 13 at the time, ran away and married Lambert Hayes, a merchant. Mary and Lambert built a home along the Braden River and had five children, while Nancy was in Key West.

In 1857, a tragic event happened involving Mary’s husband Lambert. While working in her kitchen, Mary looked through the window to see her husband Lambert, boarding his raft before traveling across the river. The second time she looked through the window, her husband was gone, and his raft was floating empty in the river. While Lambert’s body never was found, many believe that he either fell overboard after suffering a medical emergency, or was the victim of an alligator attack. This tragic accident, in addition to several hurricanes that hit Key West, brought Nancy and James back to Manatee.

Once back in Manatee, the Cunliff family established their home near a convenient crossing point on the Braden River, known as the “Hollering Point”. Here Nancy operated a free ferry, and offered warm meals to people traveling through the county. In addition to feeding those traveling through the area, Nancy had a spare bedroom in her home which she offered to overnight guests for a small fee. Being a smart and witty woman, Nancy called her room for rent, the “Profit Chamber”, and donated all of her proceeds from the rent to the circuit preacher.