Referred to as "Ohio's Pride" for the array of murals, bronze sculptures, mosaics, and symbols that adorn the exterior and interior walls, the doors to the Thomas J. Moyer Ohio Judicial Center, officially named after the late Chief Justice Moyer in 2011, opened in March 1933. Designed in the Art Deco style by Cincinnati-based architect Harry Hake, the building was constructed to house nearly 2,500 state government employees and provide public assembly space and room for the State Library. Funded by a property tax, the building's design celebrates and honors the achievements of the people of Ohio, while also serving the functional purpose of an office building. Over the years, the building lost its luster, but was revived following a meticulous renovation by the architectural firm Schooley-Caldwell from 1998-2004. The building has served as the home of the Supreme Court of Ohio since its reopening in 2004 as the Ohio Judicial Center. Visitors are encouraged to admire the art, architecture, and history in addition to observing the proceedings of the state's highest court.

The western facade of the building tells the story of Ohio as part of the Northwest Territory and subsequently as the 17th state of the union. Inscriptions and symbols illustrate six attributes of good citizenship. 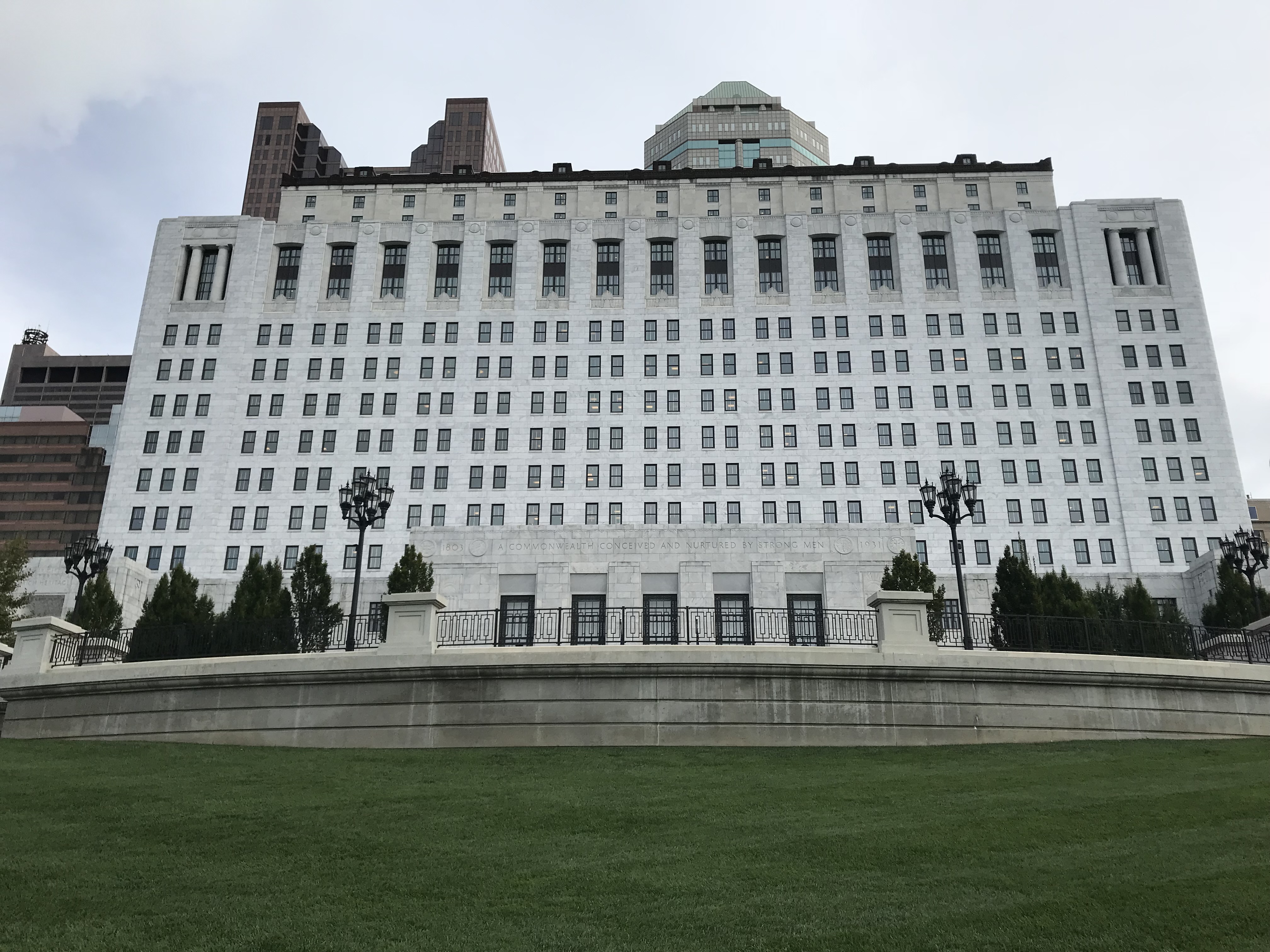 The courtroom of the Supreme Court of Ohio where the chief justice and six justices hear oral arguments. The decisions made by this court become governing law in Ohio. The original artwork in this room was painted by Rudolph Scheffler and depict the history of Ohio. 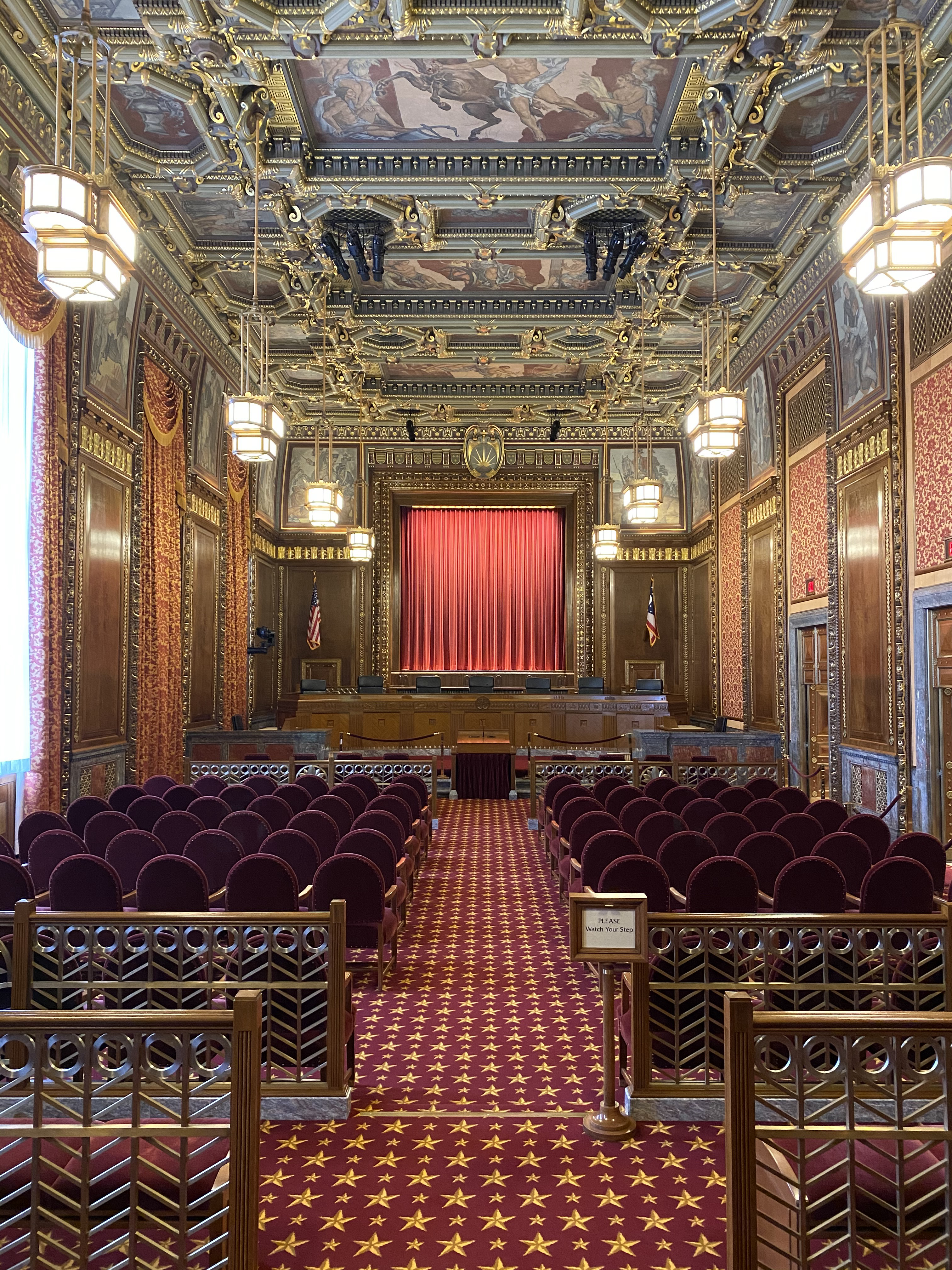 The Grand Concourse on the first floor is the main ciruclation space for visitors and employees. High on the walls are 19 bronze bas-reliefs created by four different artists. The portraits depict the eight presidents, nine U.S. Supreme Court justices, and two Speakers of the House of Representatives who hailed from Ohio (as of 1933). 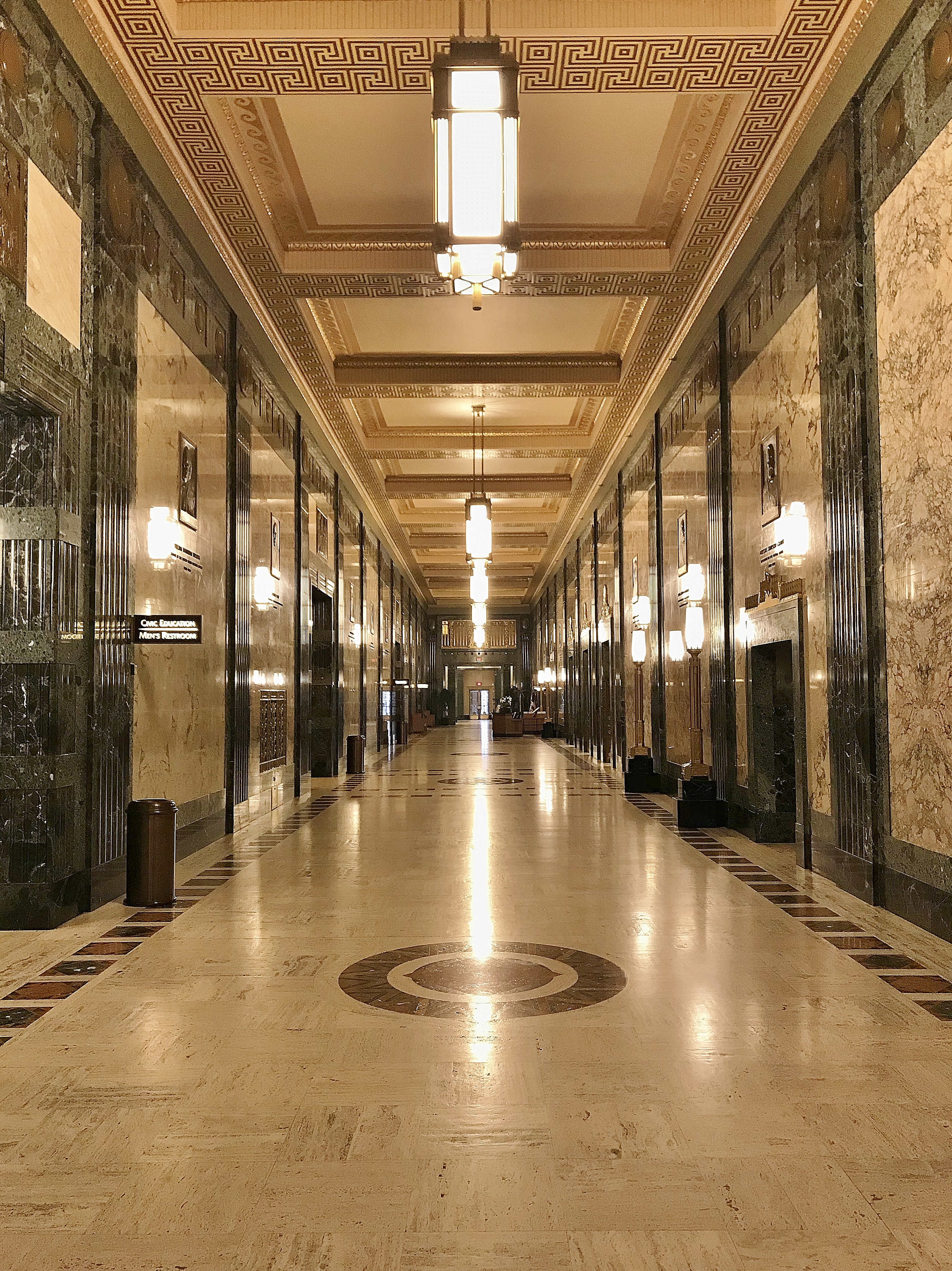 The north hearing room was originally used by the Industrial Commission to hold workers' compensation hearings, but today it is primarily used by the Board of Professional Conduct for hearings. The original murals were painted by Cincinnati artist John Holmer. 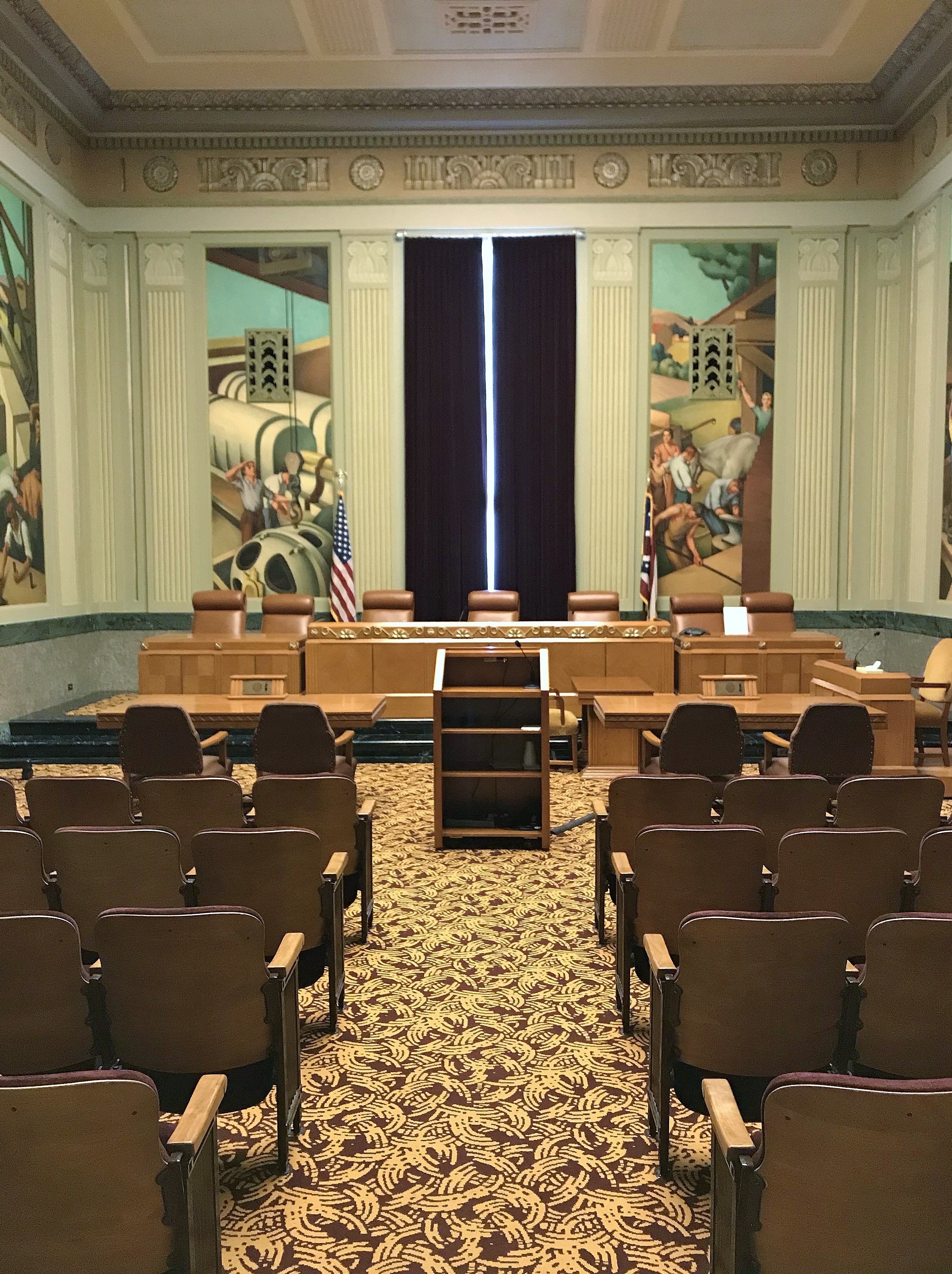 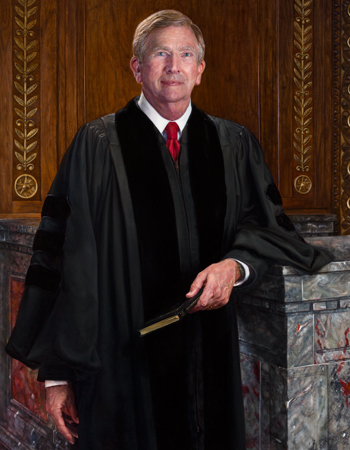 From 1860 to 1900, Ohio’s population roughly doubled from two to four million people, with many of those people moving from rural areas to the urban settings of cities. As the population and economy boomed, the number of state government employees also increased. These employees outgrew the available space at the Ohio Statehouse, which had housed all three branches of government since opening in 1861. As early as 1908, the Columbus Plan Commission released a proposal to develop the area along the Scioto River with a revitalized government center (1). Although these plans were not adopted, the idea for a civic center in downtown Columbus was established. In 1929, the Ohio General Assembly passed a bill authorizing the formation of a five-person Ohio State Office Building Commission that was responsible for the selection of a site for the new state office building. By November of that year, the land along the east side of the Scioto River was selected and plans were made for the purchase of the land and the demolition of the preexisting buildings.

The next step was to hire architect Harry Hake of Cincinnati, with Frank Bail of Cleveland and Alfred K. Hahn of Toledo as consulting architects. This was Hake’s biggest project outside of Cincinnati where he was well-known for designing numerous buildings for the University of Cincinnati’s campus, the city’s police and fire departments, the 1931 Art Deco “Telephone Building,” and Crosley Field, the Cincinnati Reds' baseball stadium. Hake’s 292 pages of specifications called for 415,000 square feet to include hearing rooms and office space for 2,500 government employees with Art Deco details throughout. Between Hake and William Wiley, the building’s art commissioner, the two men came up with the plan for the art and decorations that fill the building. Construction of the Ohio State Office Building came at a tumultuous time in American history as Hake was hired just three months before the October 1929 stock market collapse. Construction began in 1930, though frequently delayed by labor disputes, and the cornerstone was laid on April 25, 1931.

The building’s exterior design reflects its three original functions: the two-story public assembly space that juts out toward the Scioto River, the smaller windows and unadorned body of the building for office space, and the tall, recessed windows of the State Library of Ohio on the top floors. There are decorations and sculptures carved into the white, Georgian (the state) marble on all four sides of the buildings. Alvin Meyer designed and carved all of these sculptures, including the bronze doors at the Civic Center Drive entrance, with the overarching theme of Ohio’s history. Just like the artwork inside the building, Meyer’s sculptures tell the story of Ohio’s history from when it was home to numerous American Indian tribes, then colonized and fought over by European powers, through statehood in 1803, all the way to the industries of the present-day (1933).

The interior of the building, specifically on the ground and first floors, is full of mosaics, paintings, and bronze bas-reliefs that represent the achievements of the people of Ohio. Knowing that citizens would be spending time in this building, Hake and Wiley commissioned ten artists to fulfill the vision of the building as a space for Ohioans to observe their government in action and to learn about the inspiring story of Ohio. The public artwork can be seen in the lobby on the ground floor, the grand concourse, courtroom, and hearing rooms on the first floor, as well as on the walls of the law library on the eleventh floor. As Governor George White remarked at the laying of the cornerstone, the building would stand as a lasting symbol, “worthy in design, architecture, and setting, of the great commonwealth of Ohio” (2).

With construction officially beginning on October 31, 1930, the building went up with astonishing speed. By April 1932, it was considered 99 percent complete with just the finishing touches remaining. However, on April 14 of that year, disaster struck in the form of a massive explosion that killed 11 people and injured more than 50 others. The explosion was so severe that “all the windows in the north and south ends were blown out of their frames. The bronze grillwork over the windows on the west entrance was twisted and blown into what is now Civic Center Drive. Huge pieces of marble and the bronze doors were thrown into the Scioto River" (3). Although there were rumors that the explosion was the result of a bomb planted by labor agitators, the official cause was from a gas buildup in a subterranean section under the basement floor that was set off by a match or torch. The General Assembly quickly approved an additional $750,000 to repair the damage and continue with the project. This brought the total cost of the building to roughly $6.5 million.

When the building opened in March 1933, it was known as “Ohio’s Pride,” and initial tenants included the Industrial Commission, State Library, and departments of Aeronautics, Agriculture, Commerce, Education, Health, and more. However, over time its luster faded. The late Chief Justice Thomas J. Moyer led efforts to renovate the building and transform it into the new home of the Supreme Court of Ohio, and in 1998 the General Assembly agreed to fund an $85 million renovation. Construction began in 2001 and involved a complete restoration of the grand concourse and the original hearing rooms, with the largest serving as the Supreme Court courtroom. The former state library was converted into the Supreme Court Law Library. The building was also updated to include a Visitor Education Center that offers visitors an inside look at the court system in Ohio. On February 17, 2004 the building reopened its doors to the public as the Ohio Judicial Center, and for the first time since it was established in 1803, the Supreme Court of Ohio occupied a building devoted solely to the judicial branch of Ohio government.

The Supreme Court of Ohio and the Ohio Judicial System