In 1926, 2093-95 and 2099-2101 West Blvd were purchased by an unusual homeowner—the United States Coast Guard, who used the houses as residences for Cleveland’s lightkeepers and their families. The lightkeepers resided in these duplexes until the 1950s, when the lighthouses they maintained became more automated. The Coast Guard retained the houses until 1988. In the intervening years, active coast guard personnel and guests to the Ninth Coast Guard District Station in downtown Cleveland stayed in the units. Cleveland is one of the busiest ports on the Great Lakes. The lightkeepers and subsequent coastguard service-people who lived in these houses provided an essential service to the City of Cleveland; they protected Cleveland’s Lake Erie shoreline and ensured the safe transport of goods, the lifeblood of Cleveland’s industry and economy. 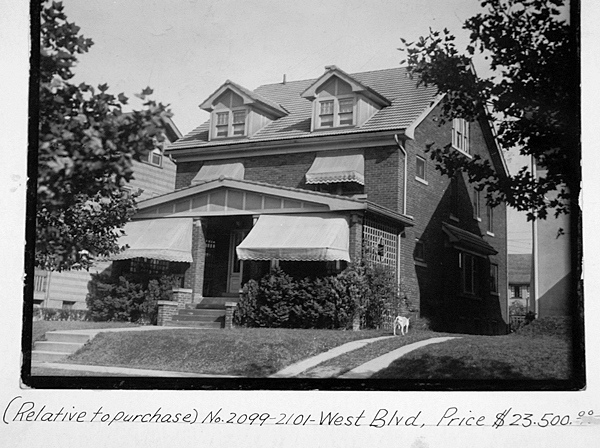 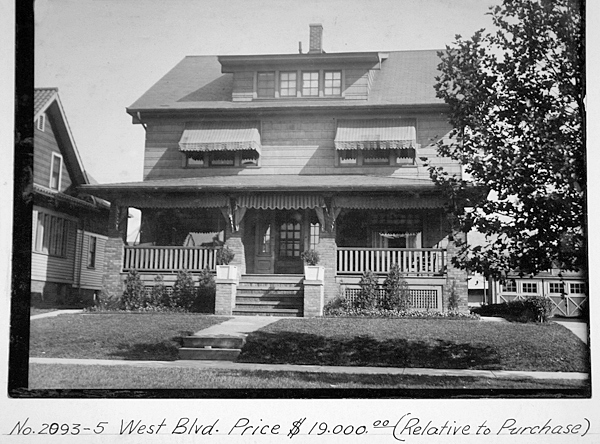 Original Lightkeepers' Dwelling on W. 9th St. The lighthouse at this location burned down and was removed in 1890s. The lightkeepers continued to occupy the house until 1926, which could accommodate four families. 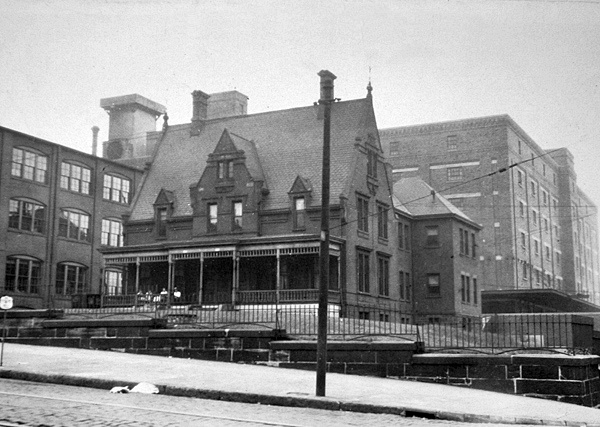 Cleveland Main Lighthouse (originally West Pierhead Light). This lighthouse was built in 1911 along with the East Pierhead light. Both are located on breakwaters built by the Army Corps of Engineers. There were lodgings for a keeper in the tower. The fog horn was added in 1916 and kept in the small house structure. 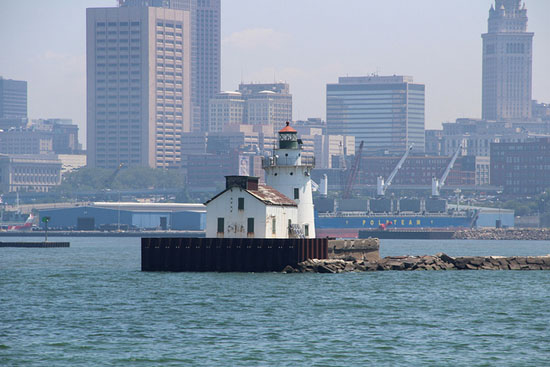 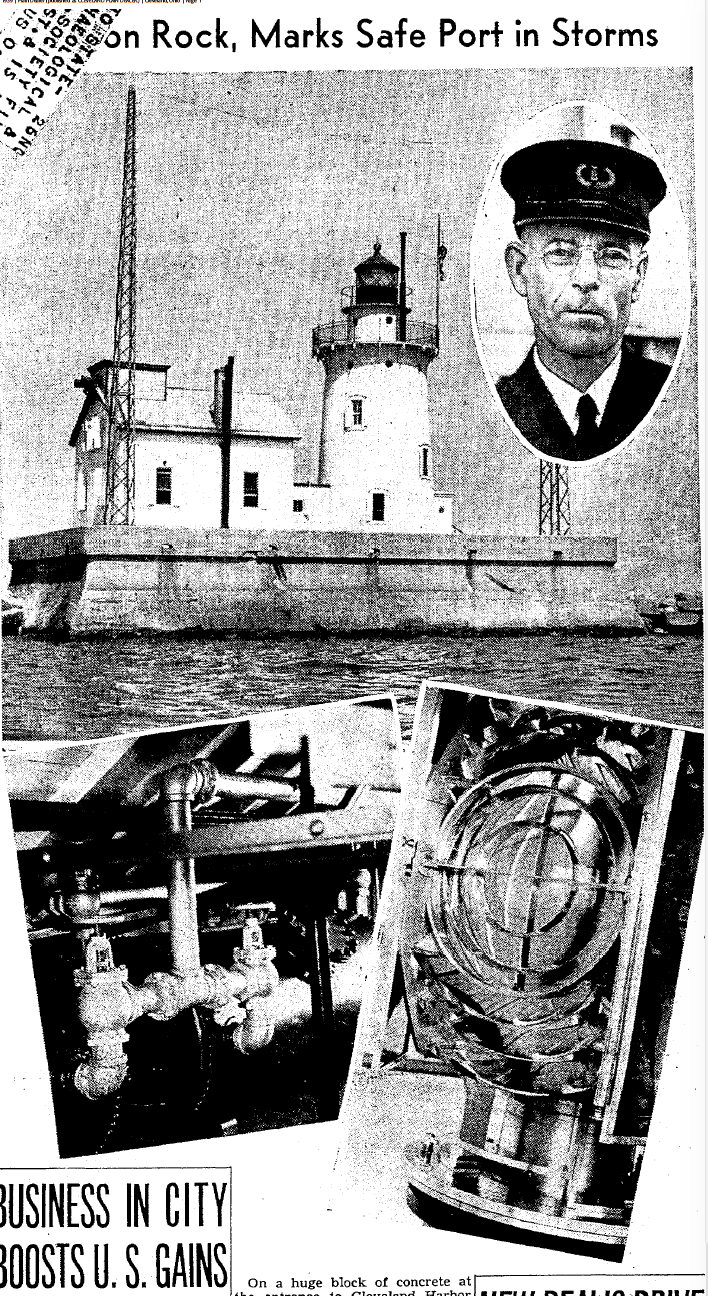 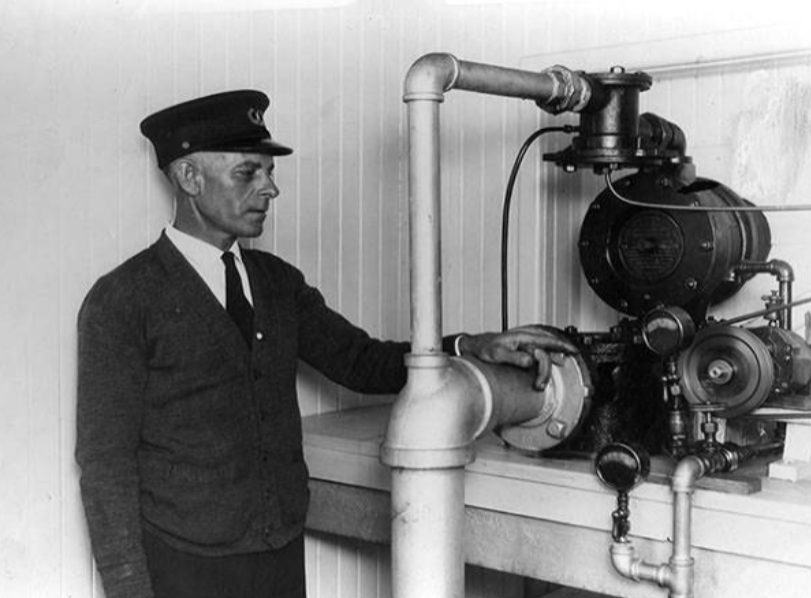 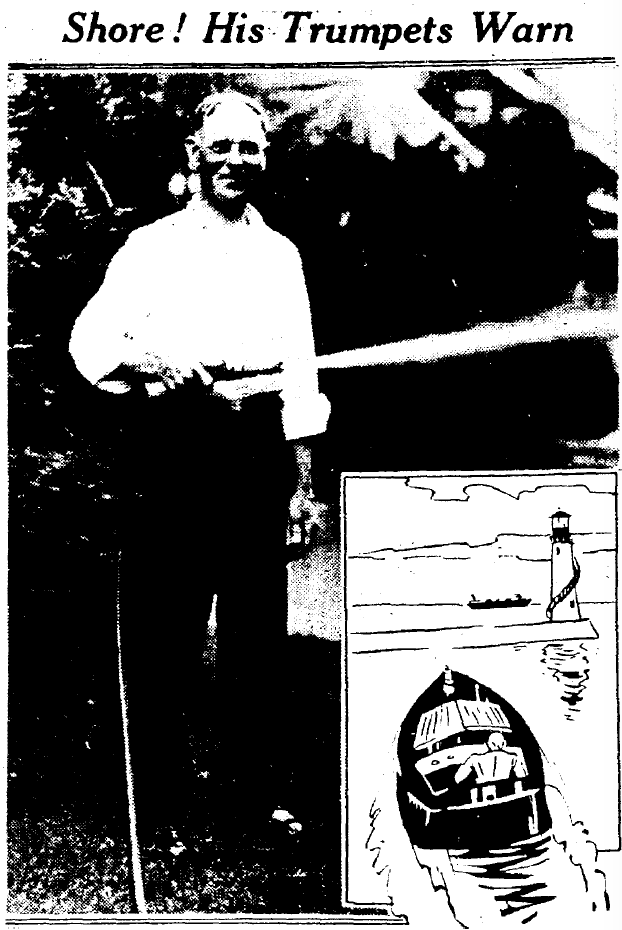 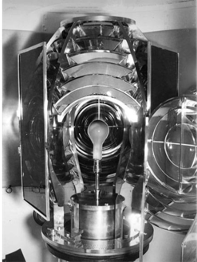 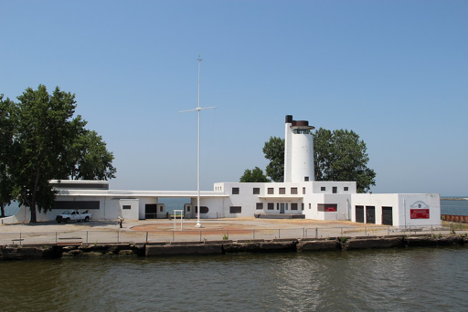 James A. Hirshfield being awarded the Purple Heart. Hirschfield was Commander of the “cutter” ship, Campbell, which is featured in the poster in the background. 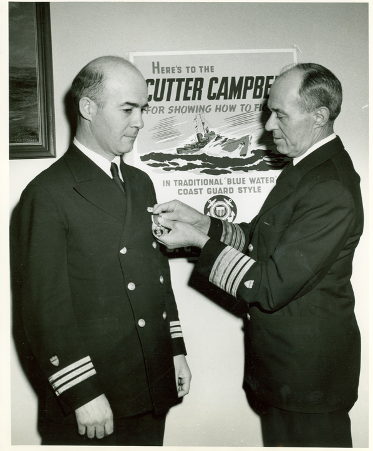 2093-95 and 2099-2101 West Blvd today. The driveway in the foreground was added post 1988. Before, the houses shared the driveway between them. This is unusual because the houses on this side of street have regulated driveway placement on the south side of the street. 2099-2101 technically had its driveway on the north side. 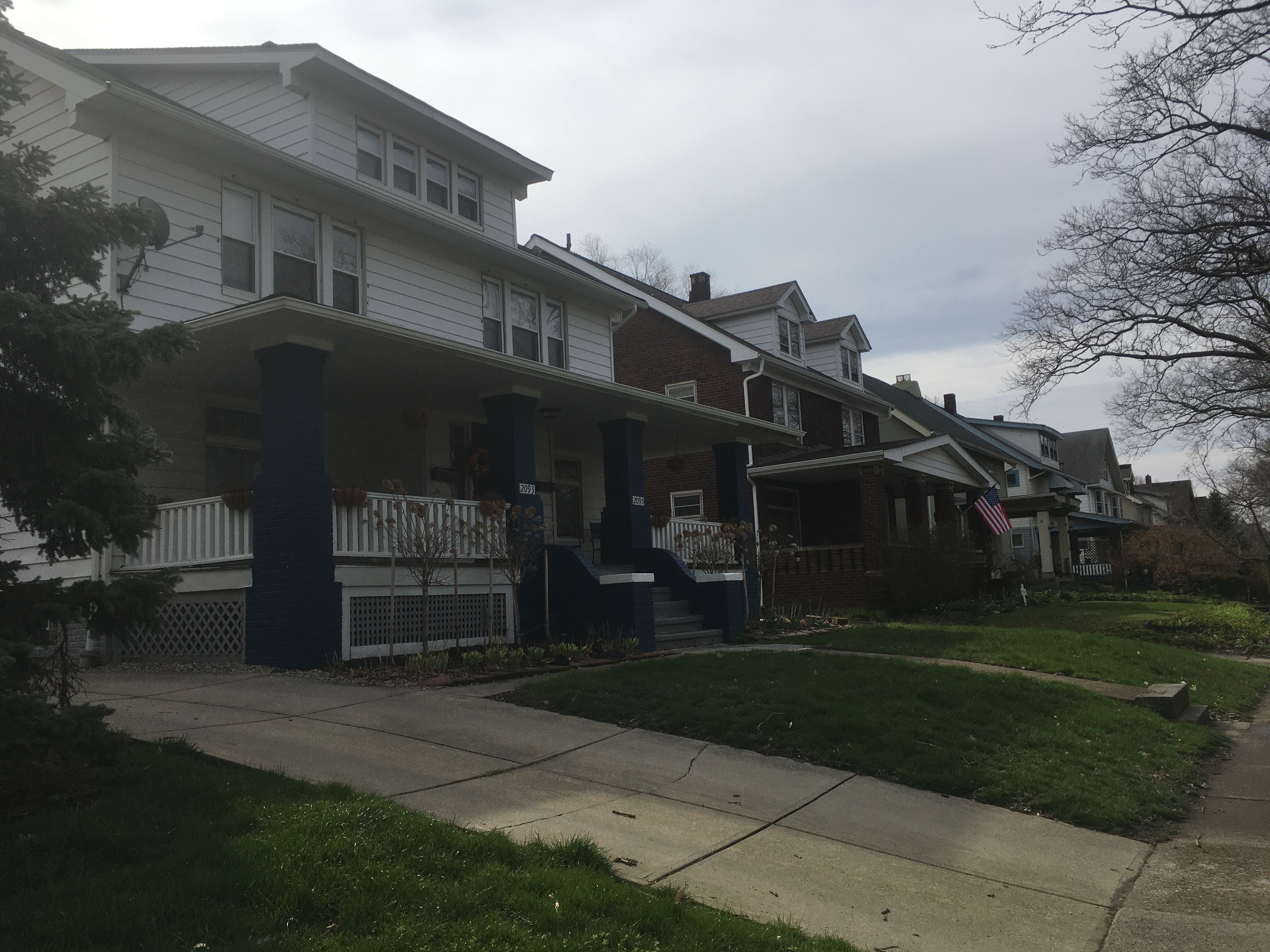 The originally shared driveway between the houses. Note that the garages were originally conjoined. 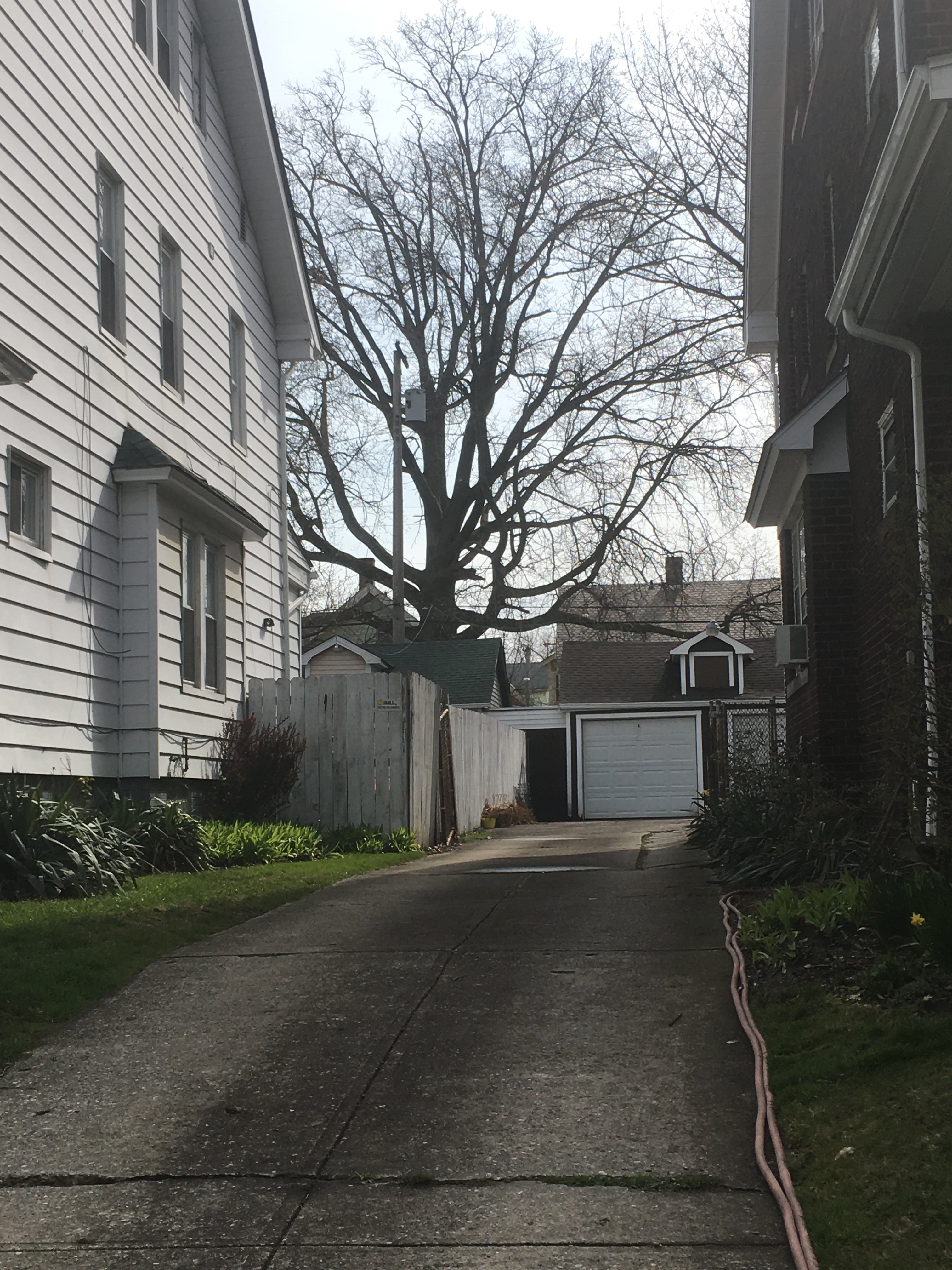 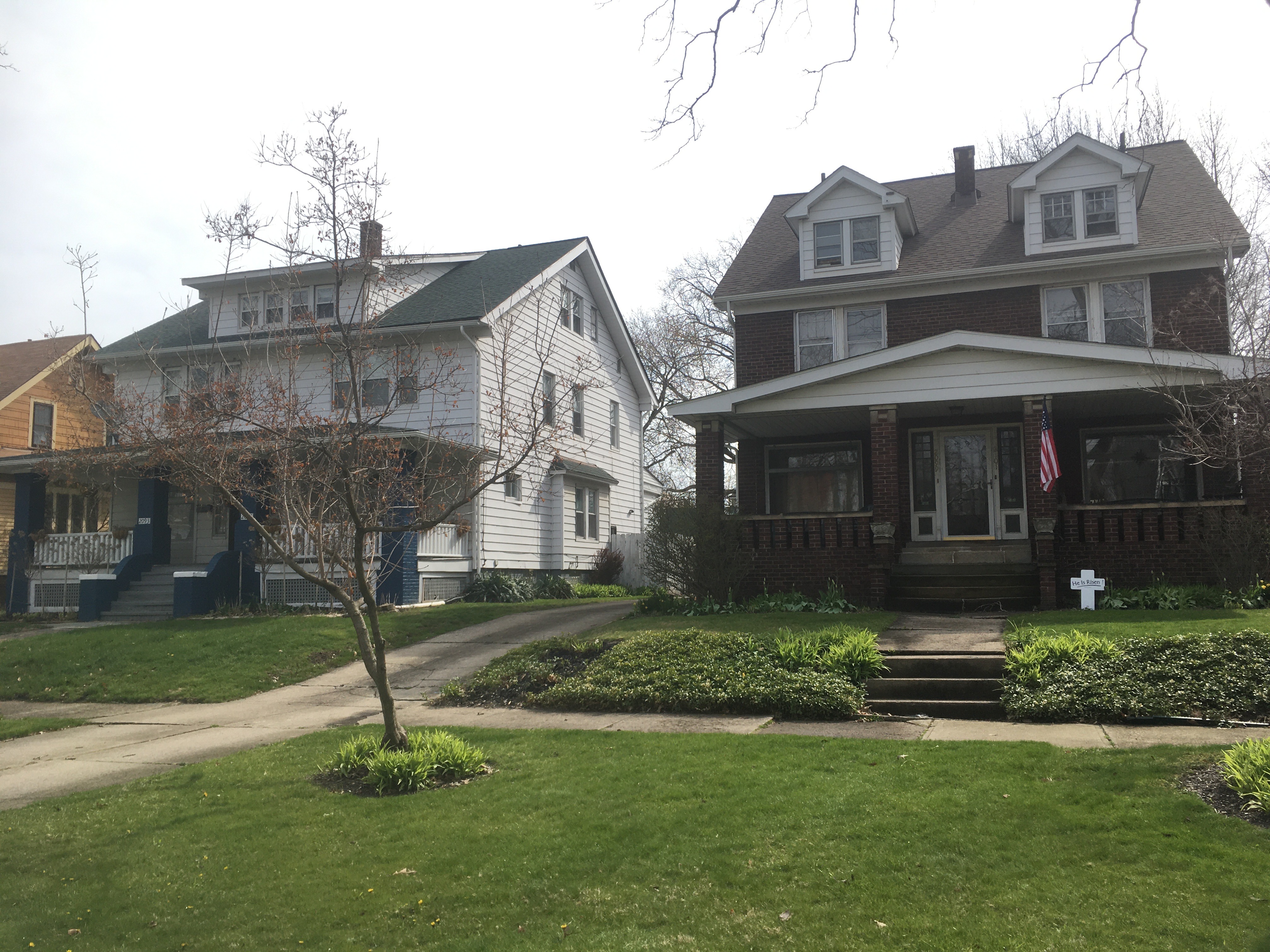 Maritime trade on the Great Lakes began in the 1600s. In 1805 Cleveland was recognized as an official point of entry by the federal government, and Cleveland’s first lighthouse was built in 1830 on the corner of Water Street (now W. 9th street). The lightkeepers who would live on West Boulevard were originally housed in a grand Victorian mansion next to a later lighthouse also on W. 9th street. In May 1926, the Coast Guard sold this residence. Then, Congress allocated $50,000 to purchase the duplexes on West Boulevard: 2099-2101 ($23,500) and 2093-95 ($19,000). In 1927, these four lightkeepers and their families moved onto West Boulevard:

The lightkeepers commuted to the lighthouses and the Coast Guard Station (about a 5-mile drive) in a rotation of shifts.

The West Boulevard lightkeepers would have served the Cleveland harbor during its busiest period—the 1920s and 30s—when Cleveland’s maritime trade was at its most prosperous. They were responsible for 6 lights and 2 fog signals around Cleveland’s harbor and at the mouth of the Cuyahoga River. Today, three of those lights are still operational: the West and East Pierhead Lights (built in 1910-11 on breakwaters) and the Cleveland East Entrance Light. Before the lights were automated, they had to be manned 24 hours a day and inspected daily. The West Pierhead Light had accommodations for keepers staying overnight in the tower. The lights on the pierheads originally had Fresnel lenses, which needed daily cleaning because any buildup of dust would dull the beam.

Some of the lights were only accessible by boat, and lightkeepers often braved dangerous weather as they performed their duty. According to lightkeeper, Charles Perry (2101 West Blvd), one of his crew would get stranded at a lighthouse due to inclement weather three to four times a season. In 1949, Samuel Crozier (2099 West Blvd), risked his life while inspecting the East Harbor Light, which had stopping signaling during a brutal winter storm. He rowed out in dangerous conditions to make the repairs, getting drench by icy waves. On his return journey, he saw an outgoing 600-ft freighter bearing down on his tiny rowboat. Crozier could see through the snow that the freighter was only 100 feet away. He said it was the most “strenuous bit of row-boating” in his then 32-year-long career [1]. But, Crozier managed to clear the freighter, relying on his own steam and row-boating expertise.

West-siders may also remember the fog signal attached to the West Pierhead light. Known as “the cow,” the foghorn let off two blasts every 30 seconds that reverberated for 16 miles or more when in use. Unfortunately, smog and smoke from Cleveland’s bustling industrial centers could set the signal off even if there was not dangerous fog. A Plain Dealer article featuring Charles Perry watering the lawn in front of his West Boulevard residence reminded potentially annoyed Clevelanders that the lighthouse and keepers played a key role in the city’s economic welfare, despite the annoying noise.

After the lightkeepers moved off of West Boulevard, the Coast Guard used the houses for personnel and guests working at or visiting the Ninth Coast Guard District Station. In 1951, 2095 West Blvd was occupied by Ohio native, Rear Admiral James A. Hirschfield (b.1902- d,1993), who commanded the Ninth District from 1946 to 1951. Hirschfield became famous for commanding the USCGC Campbell in a successful attack against German U-boats during World War II. For his efforts, he was awarded a purple-heart and numerous other decorations over his 39-year career. Hirschfield returned to the Cleveland area when he retired in 1962. He became the president of the Lake Carriers Association, a trade organization serving companies operating cargo vessels on the Great Lakes. Another notable resident, Rear Admiral Frank L. Leamy lived at 2095 West Blvd in 1954. Under his leadership of the Ninth District from 1954-56, he inaugurated a motorboat safety program in the Great Lakes. The Ninth District examined 60,633 crafts during this period, an all-time record of safety examinations.

In 1988, the Coast Guard sold the houses on West Boulevard to civilian homeowners. But their ownership of these duplexes forged an unlikely link between the West Boulevard neighborhood and Cleveland’s larger maritime and military history. The lightkeepers who lived here were guardians of the guardians that lit the way into and out of Cleveland’s busy port.