The Layers of Kerry Park

Seattle has grown exponentially since its founding in 1851. The rich history surrounding the beautiful landscape is incredible. The city itself is watched over by the towering Mount Rainier. The peak can be seen especially well from the glorious Kerry Park. This park sits northwest of Seattle on top of Queen Anne hill. The park is a large strip of grass and concrete watching over the buildings below. There is a large sculpture placed in the middle. The two large metal boxes, each hollow through the middle, help add to the already beautiful scenery. The park was founded decades after the founding of Seattle, and remains a staple of Seattle's iconic view. It is usually filled with tourists and photographers grasping or capturing the view. Despite its beauty, there are several layers of history underneath the great landmark. This includes the creator of the park, Albert Kerry. As well as the constant fight for the preservation of the park. This includes the early fights to keep the park the same as well as the architecture and buildings surrounding it. Kerry park has faced many unknown battles to survive while remaining at the forefront of Seattle tourist attractions. The overlooked history is half of the beautiful park.

This is a very old image that displays the old view, one without the towering skyscrapers and modern technology that can be seen from anywhere in modern times. 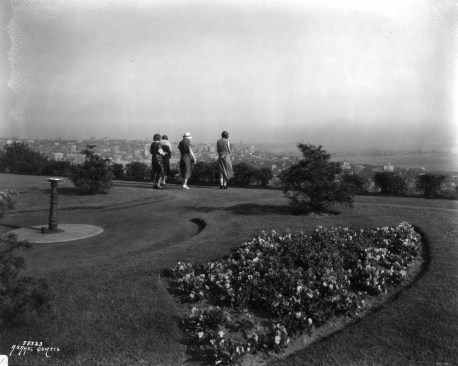 This is an image of a young boy drinking from the first water fountain in Kerry park in 1944. It showcases the old houses and cars in the background and acts as a time machine to what Kerry park used to look like. 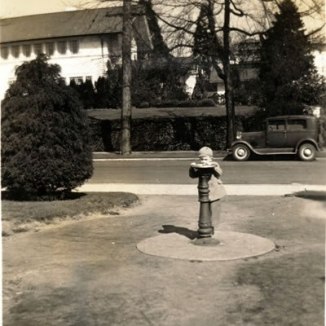 This image was taken shortly after the metal sculpture was included in the park. It takes the places of the child and water fountain from the previous photo. 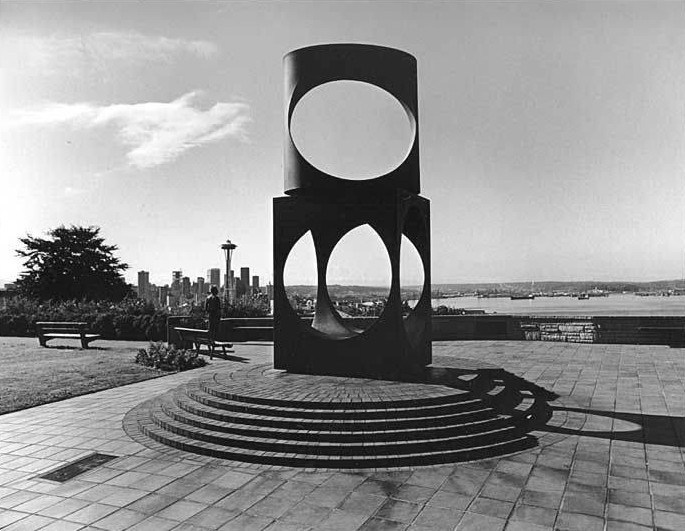 Kerry park, officially donated to the city in 1927, was named after Albert Kerry. He was a northwest lumberman who had slowly made his way higher in the lumber Industry. Albert Kerry began the Kerry Lumber Company with his brother in 1896 in Seattle. Although, shortly after the construction, the company buildings were destroyed in the great Seattle fire. This set Albert on a longer path of restarting in far north British Columbia. He was met with success and soon became the co-founder of the Washington and Oregon Timber company. After years of success and traveling through the Pacific Northwest he returned to his home in Seattle. His involvement with the Seattle economy was well known during the time and continues to be discreetly shown through the still standing park.

The location was perfect for Albert Kenny. He had imagined turning the beautiful spot into a park. Doing so turned dreams into reality. His name was engraved into another section of Seattle's history. The park is a perfect place for visitors and shines value on neighboring properties.

The park sits on West Highland Drive, a street lined with luxurious houses and buildings. During the early years of the 20th century, the lots were quickly purchased by nearby neighbors hearing of the rumor that the now Victoria Apartments would be constructed. The plans to build high scale apartments next to the park threatened the pristine park and neighborhoods view and character. The people living near the park created such an uproar that the city was quickly pushed to enforce regulation restricting the height of any future buildings. The community surrounding the park was satisfied with the restriction, although this was just another step for contractors and large companies. The companies later found ways around the restrictions. Large buildings were built, east of the park, that made nearby houses seem insignificant in size. This was frustrating for the community, but was uncontrollable. The towers remain today overlooking the park and landscape. Despite them being an active eyesore and inconvenience to neighbors, the well known view was not obstructed in any sort.

Kerry park faced several downsizing attempts from companies and wealthy individuals. These attempts were made purely for personal gain, either profit or in order to obtain the view. This did not sit well with the community, which meant it did not sit well with the city. The city held its ground, and remains a staple of the present and the past. The park itself has also faced changes in of itself. The park was placed under construction in later years in order to harbor more people and have a more attractive look. This included reinforcing the walls preventing individuals from rolling down the grassy slope. The large metal sculpture was added as well, adding an iconic feature to the already magnificent view. The park also faced changes at the bottom of its steep slope. A play structure was built, along with a makeshift softball field and half of a basketball court. These features all add to the scenery and create a nearly “perfect” park.