Located in front of the Nickel Plate caboose, is a baggage car once used by the Richmond, Fredericksburg, and Potomac (RF&P) Railroad. This car was built in the 1930s to carry passenger luggage, as well as ship large items, mail, and packages for the U.S. Postal Service and the Railway Express Agency (REA). 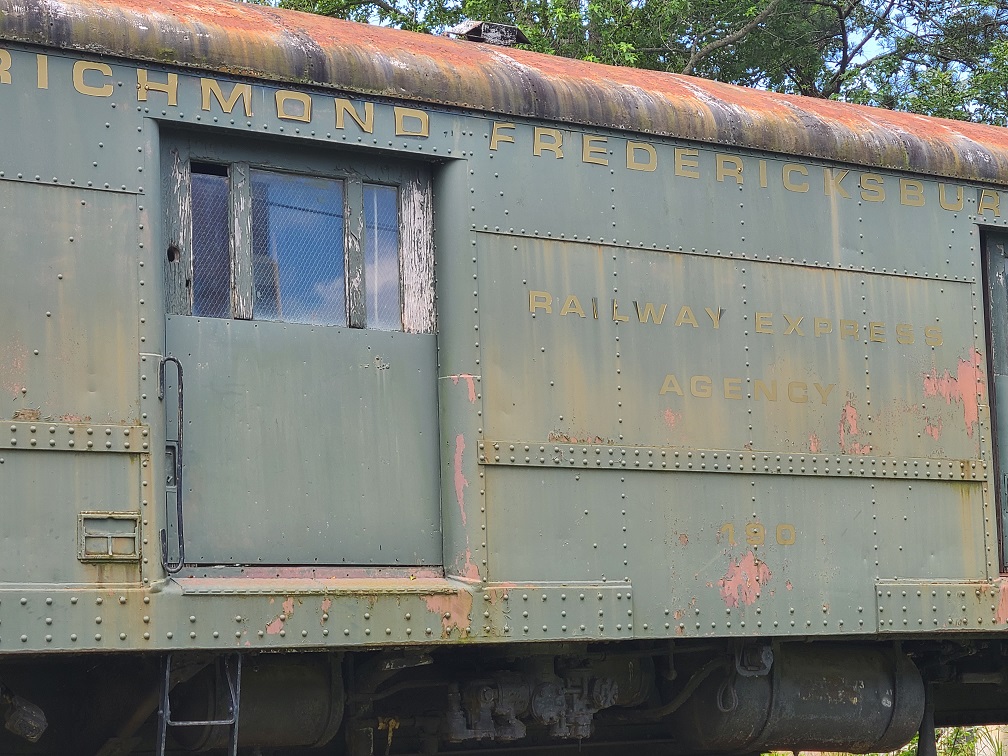 The Richmond, Fredericksburg & Potomac (RF&P) Railroad had baggage cars in their passenger trains; this car, #190, was built in the 1930s for that service. The portion of the car with the smaller door was reserved for the Railway Express Agency to carry priority packages for its delivery service. The larger door opened into a baggage compartment for carrying the luggage of passengers and for shipping larger items, including machinery and animals. Early baggage cars also carried mail for the U.S. Post Office. Railroad employees would toss bags of mail out through the door and grab incoming bags as the trains passed stations for which there was no scheduled stop. The baggage car was usually placed well forward in the train because of its very heavy weight and because it held valuable shipments of anything from jewels to stocks and bonds, as well as payroll money. Art Tross, who worked for railroads for most of his life, recalls that baggage cars sometimes included occupied coffins, with a known instance of price to ship set at twice the price of a first-class ticket!

Baggage Car 190 was operated at first with the Pullman Green passenger cars on the RF&P passenger trains and was painted to match. Later, when the RF&P changed to stainless steel passenger cars, this car retained its green livery. The car rolled on six-wheel trucks because of its weight and had provisions for lighting and for a toilet for the baggage car men who rode in it. To support water and electric power there is a large water tank and the battery box underneath the car.

The RF&P Railroad was chartered in 1834, to run north from Richmond via Fredericksburg to the Potomac River. It opened from Richmond to the Potomac River at Aquia Creek in 1842, with a connecting steamboat service to Washington, D.C. Eventually, through mergers with other railroads, the RF&P extended rail service to Washington, D.C., including the Potomac Yards in Alexandria. The track is now the RF&P Subdivision of the CSX Transportation system.

The Railway Express Agency (REA) operated as a national package delivery service from 1918 to 1975. REA arranged transport and delivery via existing railroad infrastructure, much as today's delivery service companies use roads and air transport. The REA had their own trucks for road delivery from the nearest railroad station to the customer’s premises. With rail, road, and even airlines, the REA guaranteed a 5-day service almost anywhere in the country. After 1975 its efficient package delivery services passed to UPS, FedEx, and other carriers.