A historical marker in Yates Park marks the approximate location of the western terminus of the Clinton-Kalamazoo Canal, an internal improvements project announced by the State of Michigan in 1837. The plan called for a 216-mile engineered waterway to follow the Clinton River inland from Mount Clemens, traversing the state to the Kalamazoo River, and connecting Lake St. Clair and the eastern Great Lakes with Lake Michigan on the west. Ground was broken at Mount Clemens in 1838, but the project was plagued by bad financing and difficult construction. The canal was abandoned near this point in 1843 as funding ran out. This portion of the canal from Utica to Yates Park was listed on the National Register of Historic Places in 1972. A Michigan Historical Marker depicting the canal's route stands in Yates Park. 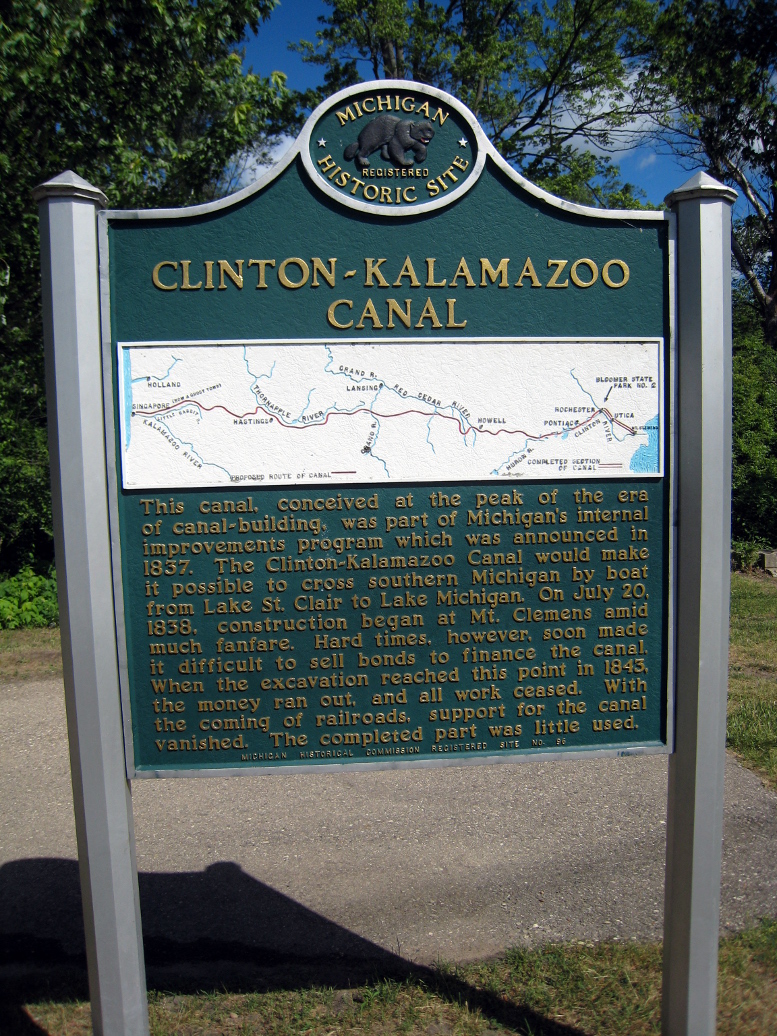 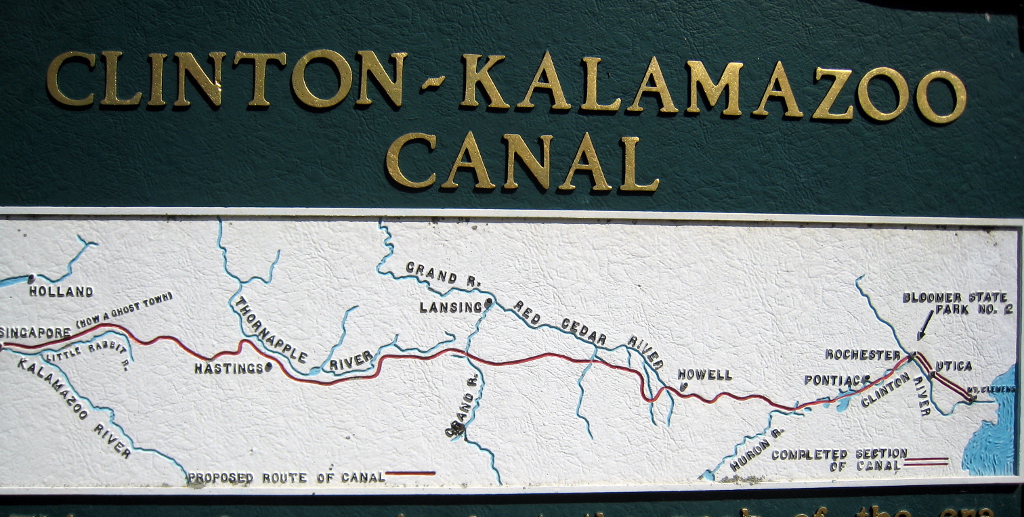 After Michigan became a state in 1837, the legislature inaugurated an era of internal improvements that was meant to create a transportation infrastructure to aid in the settlement of the state's interior. Inspired by the success of the Erie Canal, which had opened in 1825 in New York state and had facilitated migration into the Michigan Territory, legislators envisioned a canal that would span the Lower Peninsula of Michigan, linking the eastern Great Lakes to Lake Michigan via water.

The project was called the Clinton-Kalamazoo Canal, as it would use the Clinton and Kalamazoo rivers, along with an engineered waterway, to create a 216-mile canal across the state. Ground was broken for the project at Mount Clemens on July 20, 1838, with Governor Stevens T. Mason turning the ceremonial first shovel of dirt. The Detroit Free Press published an account of the Macomb Statesman newspaper in Mount Clemens, which described the scene as follows:

Friday, the 20th inst., was a proud day for Mt. Clemens. The rising of the sun was announced by the discharge of cannon, the ringing of bells, and martial music. At 11 o'clock, an oration, appropriate to the occasion, was delivered on the public square to a large and respectable audience, by R. P. Eldredge, Esq. A procession was then formed by H. D. Terry, Esq., marshal of the day, and his assistants, which proceeded to the ground on the line of the canal, to witness the ceremonies of breaking ground. On the field, Col. Conger, of Belvidere, president of the day, presented the spade to his Excellency, Gov. Mason, with a brief address.

By 1843, sixteen miles of canal had been built and worked had stopped near Rochester. The project was suffering from unstable financing and cost overruns caused by the difficulty of traversing thickly-wooded terrain and the necessity to build locks and dams as the interior elevations increased. Another factor was the rise of railroads, which promised to provide faster, cheaper, and more extensive transportation routes than the canal. The state grew weary of continuing appropriations for the canal and dropped the project in 1843.

Portions of the canal were navigable by small barges and boats and were used for limited purposes by area farmers. The state legislature authorized leases of the canal for such purposes, but eventually, more and more of the canal fell into disrepair and parts were filled in. In 1893, the legislature was petitioned to abandon the canal. The petitioners said in part:

...that the said canal was built from the mouth of the Clinton river, in the county of Macomb, to the vicinity of the village of Rochester, in Oakland county, and there abandoned by the State; and that the State of Michigan has never relinquished its rights to the said land so to be used for the said canal, which makes a flaw in the chain of title to much of said lands, and the possession thereof. The State for some fifty years has done nothing with said premises, and exercised no acts of ownership over the same. In some places it has been filled up, and in others is used as a ditch over which no one exercises particular control. It makes an ugly looking hole that it is to the interest of the public to have graded and fixed, and were all the original grantors, their heirs and assigns, assured that the State held no legal title thereto, they would quickly abate this public nuisance.

In 1895, the State of Michigan formally abandoned the Clinton-Kalamazoo Canal by resolution of the legislature and relinquished all rights to land that had been acquired for the canal's route and tow-paths.