Dedicated in 2005, this Sarasota statue commemorates the scene in the United States on August 14, 1945, when Japan surrendered thus ending World War II. On that day, people in New York City and around the country celebrated the victory in the streets. Alfred Eisenstaedt took a photograph of a sailor and a nurse kissing in Times Square that became a symbol of the celebration after gracing the cover of Life Magazine. A lesser-known photographer named Victor Jorgenson captured a similar photograph of the couple. This second photo inspired Seward Johnson to construct the Sarasota statue titled the “Unconditional Surrender” in 2005. The statue was moved from Sarasota to San Diego after two years until another version was sent back to Florida in November of 2009. The statue was damaged several times, but Johnson, along with the city of Sarasota, FL, has made sure to preserve the statue over the years. There are multiple replicas of the statue all over the world, for example, Normandy, France; San Diego, CA, Pearl Harbor, HI; and Hamilton, NJ. In 2010, WWII Veteran Jack Curran purchased the original statue and a ten-year lease for $500,000 at the bayfront of Sarasota for the statue to stand. The lease expires in June 2020, and then the statue will belong to the city of Sarasota. 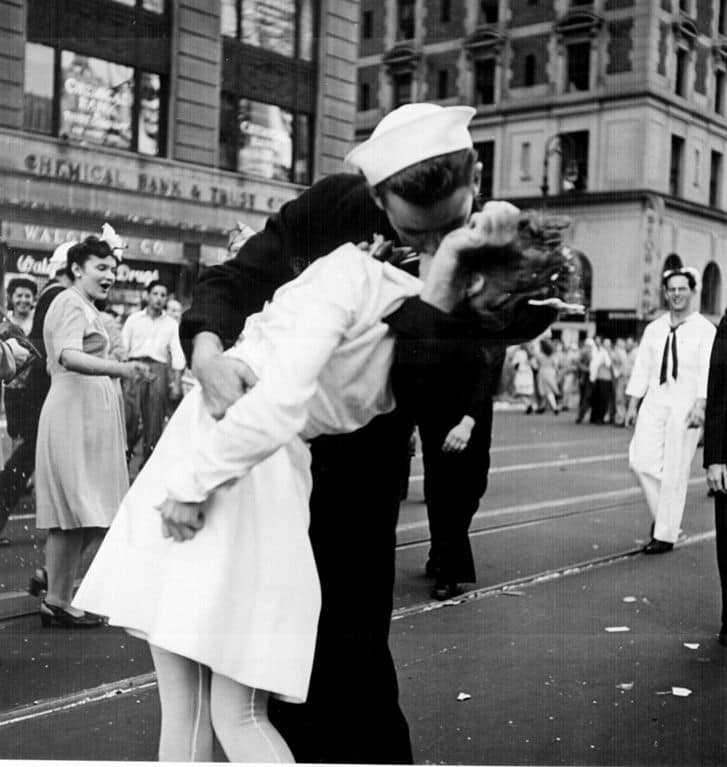 Pictured is the "Unconditional Surrender" Statue in Sarasota, FL. 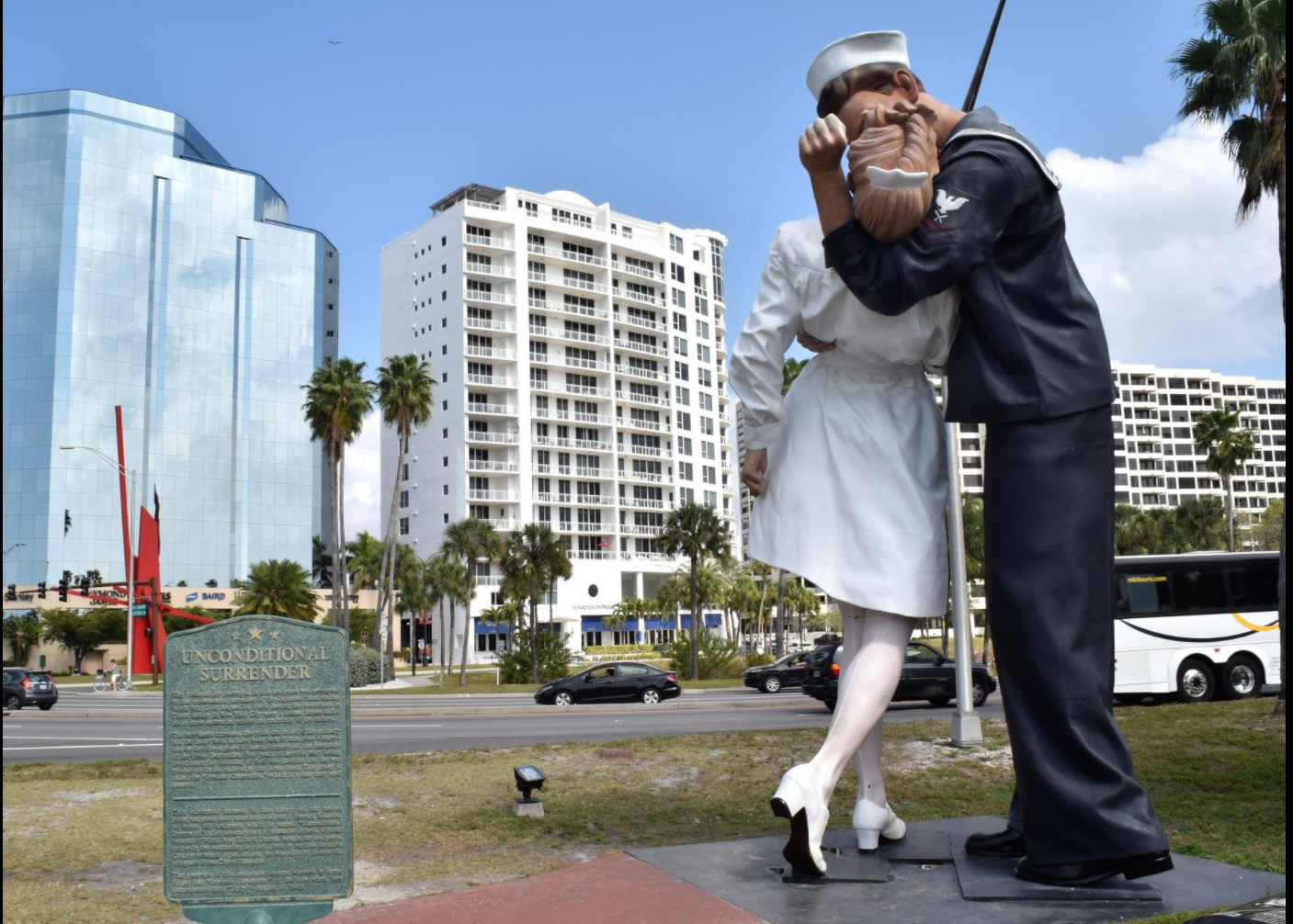 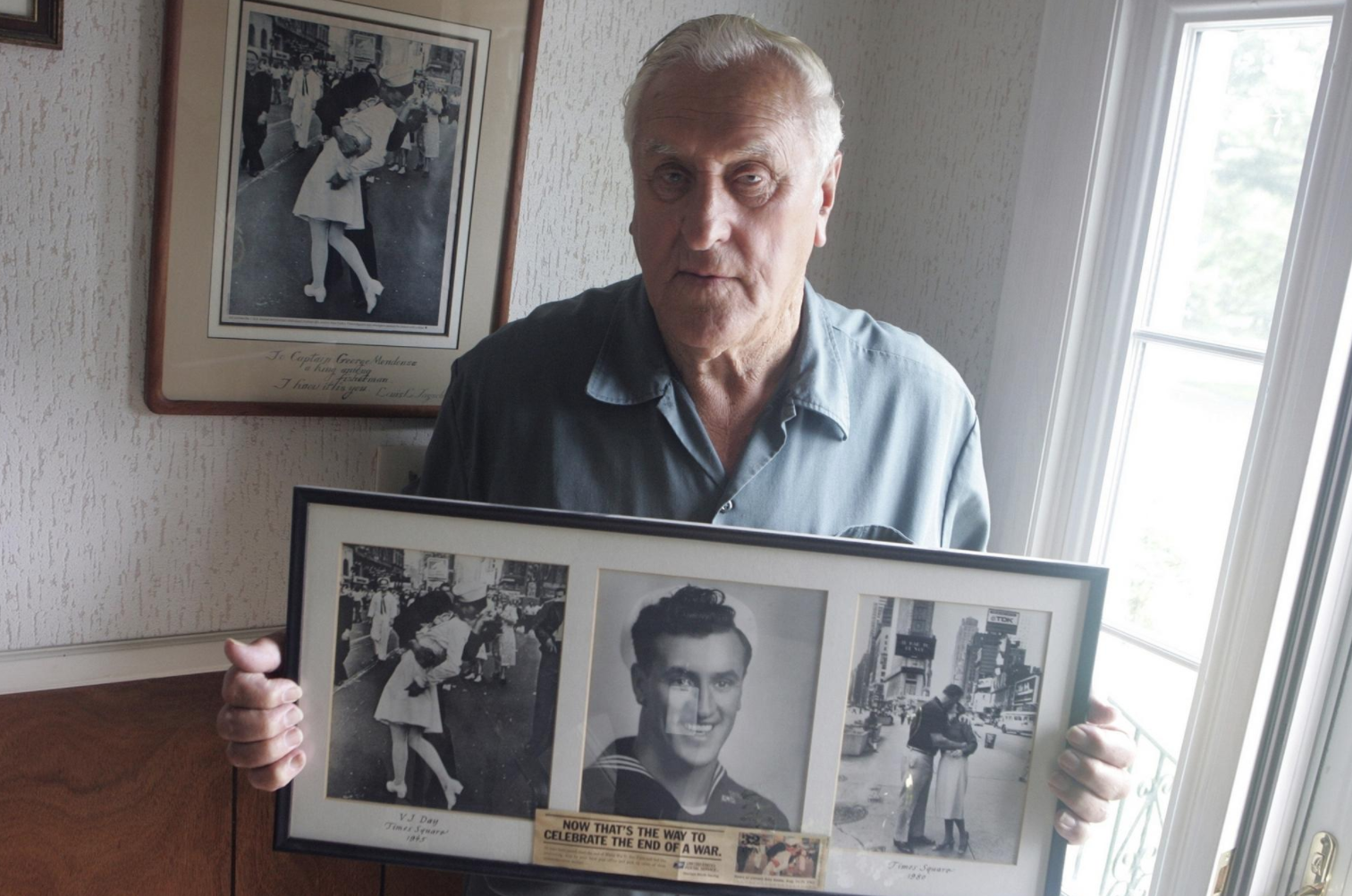 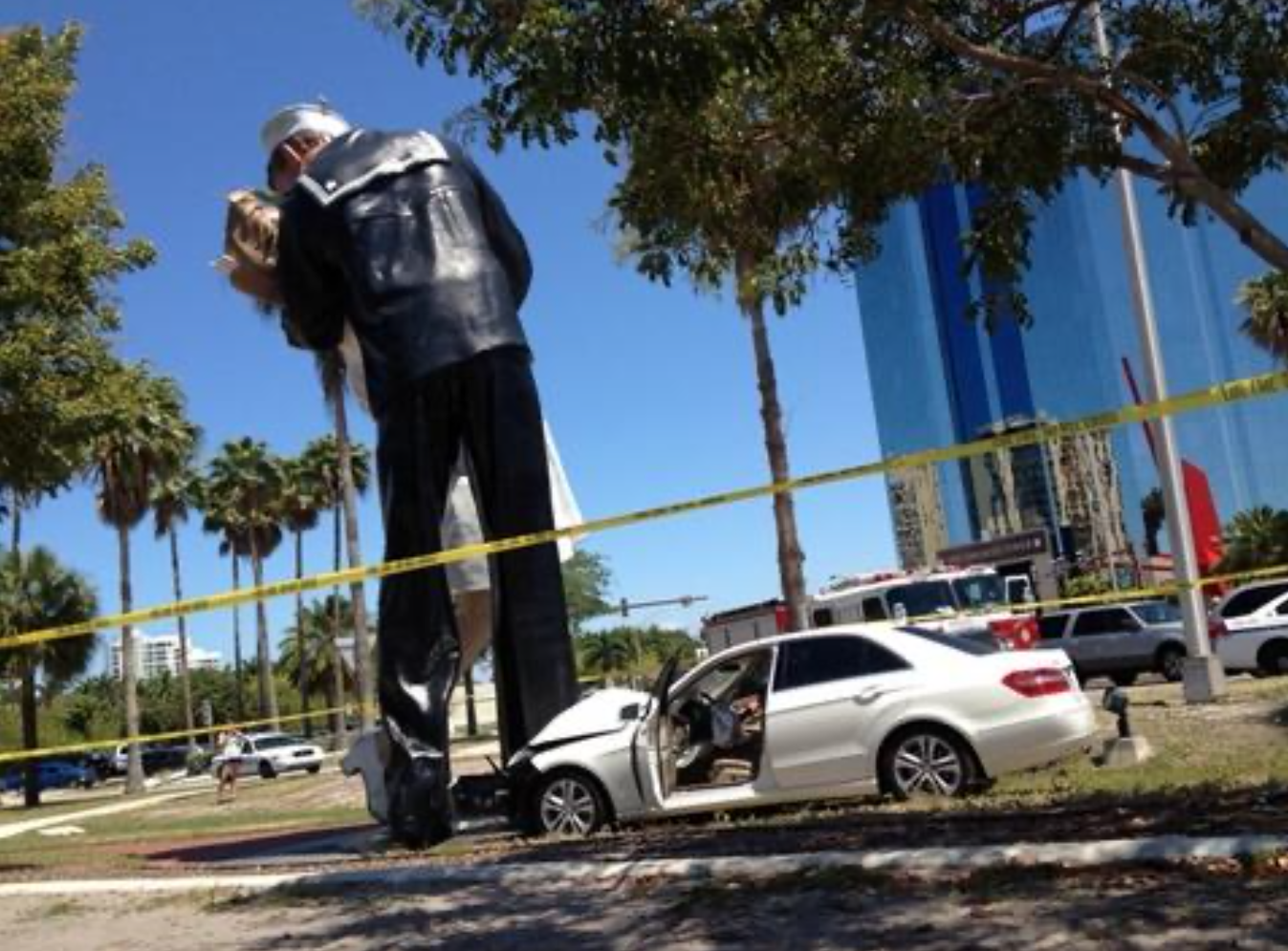 Pictured is the vandalism that took place on February 18, 2019. 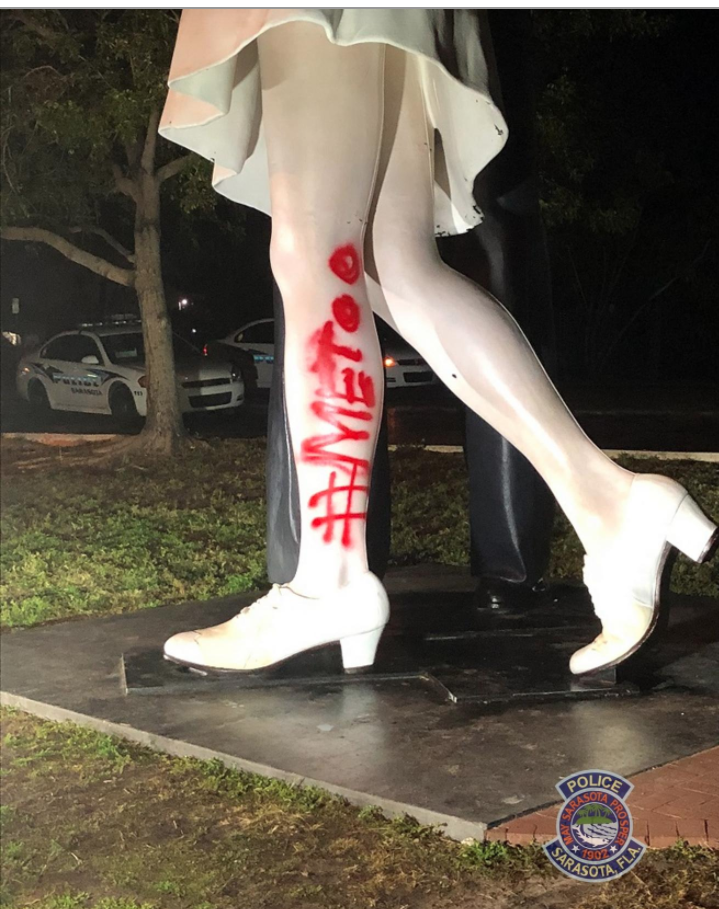 Seward Johnson, pictured with a temporary statue in New York City in 2015. 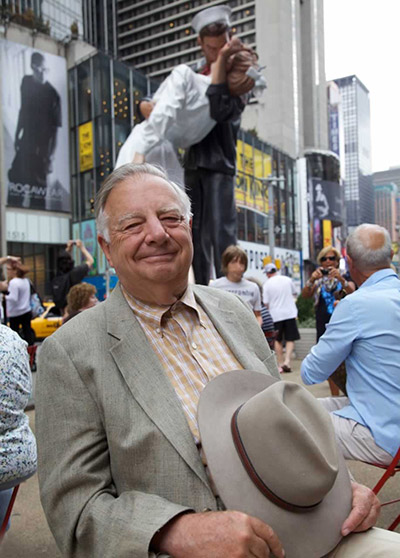 On August 14, 1945, also known as V-J Day, the day Japan surrendered to the US during World War II, many New York Citizens flooded into the streets to celebrate. Alfred Eisenstaedt had captured a picture of a sailor and a nurse sharing a kiss that was later published in Life Magazine titled “V-J Day in Times Square,” but wasn’t able to get their names due to the excitement among the streets at the time. This photograph became one of the most famous pictures of the 20th century. Many people have claimed they were the kissing couple, but it was later confirmed to be George Mendosa and Greta Zimmer Friedman. Mendosa served on a destroyer during the war, which was on leave when the end of the war was announced, and Friedman was a dental assistant in a nurse’s uniform. Mendosa was unaware who Friedman was, but said that she reminded him of the nurses he saw taking care of wounded sailors on hospital ships.

In 2005, Seward Johnson constructed the original “Unconditional Surrender” Statue on the bayfront of Sarasota, Florida. The inspiration for the statue was an image of the kissing pair captured by a lesser-known photographer, Victor Jorgenson, due to his image being a free domain. The original statue is a 26-foot-tall, 5/8-inch thick, 12,000-pound monument created out of styrofoam. The local art community had a tremendous disdain for the statue claiming that it was tacky and wasn’t art. After two years in Sarasota, it was moved to San Diego, California, where the statue received the same backlash that it did in Florida. Numerous Sarasota citizens complained about missing the statue until an aluminum version of the statue was placed at Sarasota’s bayfront. Since then, the San Diego Unified Port District took a vote and purchased a bronze version of the statue to live permanently.

Over the years, the Sarasota Statue has been damaged and vandalized a few times. On April 26, 2012, due to a medical emergency, a 62-year-old woman lost control of her vehicle and wrecked her white Mercedes E350 sedan into the statue and created a 3-foot-wide hole in the sailor’s foot. The crash also caused more hairline cracks to form in the statue’s frame. The statue was later shipped to New Jersey for some repair from Steward Johnson, but until then, the car was left in the sculpture for hours due to fear that the statue might fall over if it were removed. On Monday, February 18, 2019, the statue was vandalized with red paint with the words “#METOO” written on the side of the nurse’s left leg. The police were notified, and by 9:00 AM Tuesday, the graffiti had been removed. The owner of Gorilla Kleen, who performs yearly maintenance on the “Unconditional Surrender” Statue, John Cloud, cleaned the statue at no charge after hearing about the damage. He removed the paint on the top layer of the statue and then touched up a few red blemishes. Many citizens were upset with the defacing of the statue and came to help clean it themselves.

Seward Johnson created many versions of the 26-feet-tall statue to be placed worldwide and produced them through a foundation he had created called the Sculpture Foundation. The prices for his statues ranged from $542,500 for styrofoam, $980,000 for aluminum, and $1,140,000 for bronze. Today, there are multiple statues, such as in Normandy, France, San Diego, California, Pearl Harbor, Hawaii, Hamilton, New Jersey, and the original in Sarasota, Florida. In 2010, Jack Curran, a WWII veteran, purchased the Sarasota statue and a lease on the bayfront for ten years for $500,000 and donated it to Sarasota. The 10-year lease agreement expires in June 2020 and will then belong to the city of Sarasota.