The home to the Taos Art Museum since 1994, this was the home of Nicolai Fechin (1881-1955), one of the most prolific painters during the 20th century. Fechin purchased his house in 1927 when he arrived from the Soviet Union. Born in Kazan, Russia, Fechin showed great artistic abilities at an early age, which allowed him to travel, study at various artistic capitals in Europe and teach in Russia. However, due to the aftermath of the Russian Revolution and the Russian famine of 1921, Fechin moved to New York City, and eventually, he moved to Taos, New Mexico. The house's design mostly showcases the Pueblo Revival architectural style, but over the years, Fechin added Russian architectural details to the house. During his time in Taos, Fechin and the Native Americans in the area became friends, and soon, the Native Americans and the Taos mountains became the focal point of Fechin's artwork. In 1979, the house was listed on the National Register for Historic Places for its unique mixture of the Pueblo Revival and Russian architectural style and its historical connection with Nicolai Fechin. In 2002, the Nicolai Fechin House was converted into the Taos Art Museum where most of his work and the work of other artists in Taos are on display.

The Glorious Exterior of the Taos Art Museum/Fechin House 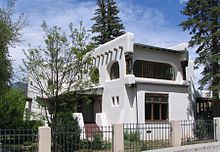 All Fun and Games: Eya Fechin's Playroom at the Museum/House 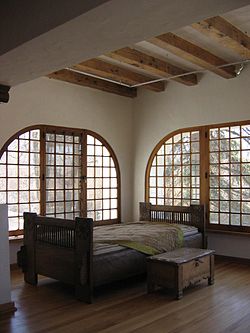 The Artistic Man Behind the House: Nicolai Fechin 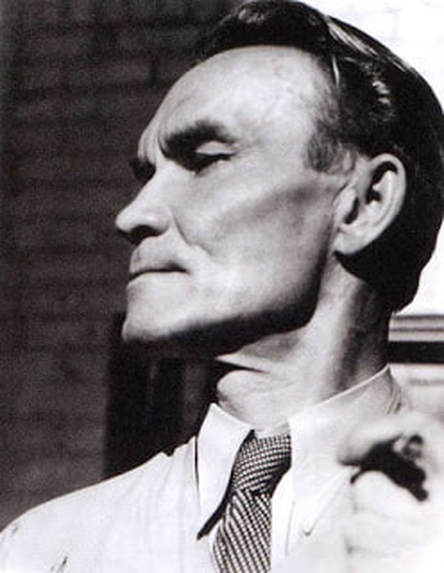 The Man Behind the Art: Fechin's Self-Portrait 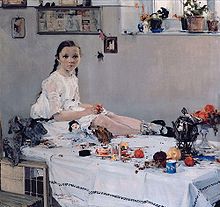 Nicolai Fechin was Born in Kazan, Russia in 1881. Early in his childhood, Fechin almost died from meningitis, but he quickly recovered. As a child, he learned how to carve wood from his father who was a professional woodcarver. In addition, Fechin show incredible drawing and painting skills, and at the age of 13, he was enrolled in the Kazan Art School, which is an extension of the world renown Imperial Academy of Arts in the capital of St. Petersburg. Eventually, Fechin enrolled in the actual Imperial Academy of Arts, and his painting often reflected the rural places and native people he had met outside of St. Petersburg and during his visit to Siberia. In 1909, after graduating from the academy with high honors, Fechin won the Prix de Rome, which allowed him to travel and study at various artistic capitals in Europe. Eventually, Fechin was invited to showcase his paintings at an international exhibit at Carnegie Institute in Pittsburgh, Pennsylvania, and beginning in 1910, he started selling his work in the U.S. through art patron, William S. Stimmel.

Upon returning from his international travels to Kazan, Fechin began teaching art for several years. Later, he exhibited some of work with some artistic movements and associations who were against artistic conformity and restrictions, such as the Association of Artists of Revolutionary Russia (AKhRR) and the Itnerants ("the Wanderers"). In 1913, Fechin married Alessandra Belkovitch (1896-1983), the daughter of the Kazan Art School director. A year later, the couple's only child, Eya (1914-2002) was born However, due to the aftermath of the Russian Revolution and the Russian famine of 1921, the family emigrated to New York in 1923 with the help of Stimmel and another art patron, Jack Hunter. While in New York, Fechin continued to sell his artwork and winning exhibitions, such as the 1926 International Exposition in Philadelphia. He also taught at the New York Academy of Art.

However, in 1927, Fechin contracted tuberculous, and in need to better his health, he and his family were invited to move to Taos, New Mexico by art patron, Mabel Dodge Luhan in hopes the dry, humid climate could help Fechin's health. As his health improved, Fechin bought a two-story adobe house. The house's materials, massing, vigas, and portals exhibits the Pueblo Revival style. However, over the years, Fechin added some Russian design elements to the house, such as the details of the exterior, the fenestration, hand-carved twisted wooden columns, and furniture. During his time in Taos, Fechin and the Native Americans in the area became friends, and soon, the Native Americans and the Taos mountains became the focal point of Fechin's paintings. In 1933, Fechin and Alessandra divorced, and Fechin stopped working on the house and left; Alessandra stayed at the house until her death in 1983.

Later on life, Fechin traveled to various places, such as New York, California, Mexico, Japan, and the Pacific Islands of Java and Bali. He continued to teach art to small groups of people. In 1955, Fechin died in Santa Monica, California, but in 1976, Eya took his remains to Kazan to be buried in his home country. In 1979, the Nicolai Fechin House was listed in the National Register for Historic Places for its unique mixture of the Pueblo Revival and Russian architectural style and its historical connection with Nicolai Fechin. Throughout the rest of her life, Eya was devoted to preserve her father's legacy In 1981, Eya founded the Fechin Institute in Taos in honor of her father. Eya Eya took the responsibility of caring for the house, and in 1994, she helped convert the house into the Taos Art Museum. After Eya's death in 2002, her daughter and son-in-law passed the house down to the Board of the Taos Art Museum, and the board made renovations to the museum. Today, the museum contains 300 pieces of artwork by Fechin and other Taos artists. The museum has several of Fechin and his family's personal possessions on display in two different exhibits, the Fechin House Exhibit and the Fechin Studio Exhibit. In addition, there is a gift shop where guests can buy books relating to Fechin and the Taos art colony, jewelry, prints, wall art, ceramics, and retablos. At the museum, people can support the museum through purchasing a membership, donating funds to the museum, and volunteering at the museums and its events.