The Greek revival residence was built in 1854 by Armistead Thompson Monroe, local merchant and great nephew of U.S. President James Monroe. he Monroe family resided in the home until 1858 when David Coleman purchased the home and planted the gardens. The next owner was the A. A. Aldrich family, followed by the George W. Crook family that lived there from 1911 to 1969. 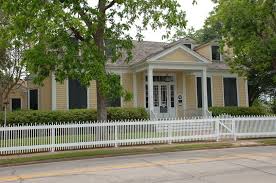 In 1963, Sara Macintosh Crook Bartlett willed ownership of the house to the people of Houston County. After her passing in 1969, the Women's Clubs of Crockett met in 1971, and formed a non-profit corporation for the preservation of the structure. Raiford Stripling directed the work, and volunteer workers, donations, and federal grant-in-aid provided for the restoration. The project was completed in 1974, and the house serves as a museum.