The Rochester Opera House block is a Richardsonian-style business block built in 1890 by local businessman Charles A. Burr. The first floor of the building has housed a pharmacy continuously since the building opened. The second floor of the building housed the Rochester Opera House, a space devoted to theatrical performances, concerts, public meetings, graduation ceremonies, and lectures. The Opera House block is significant as a local example of Richardsonian architecture, and for its connection to Rochester's social and commercial history. The building underwent exterior restoration in 1987-89 and was listed on the Michigan Register of Historic Sites in 1990. 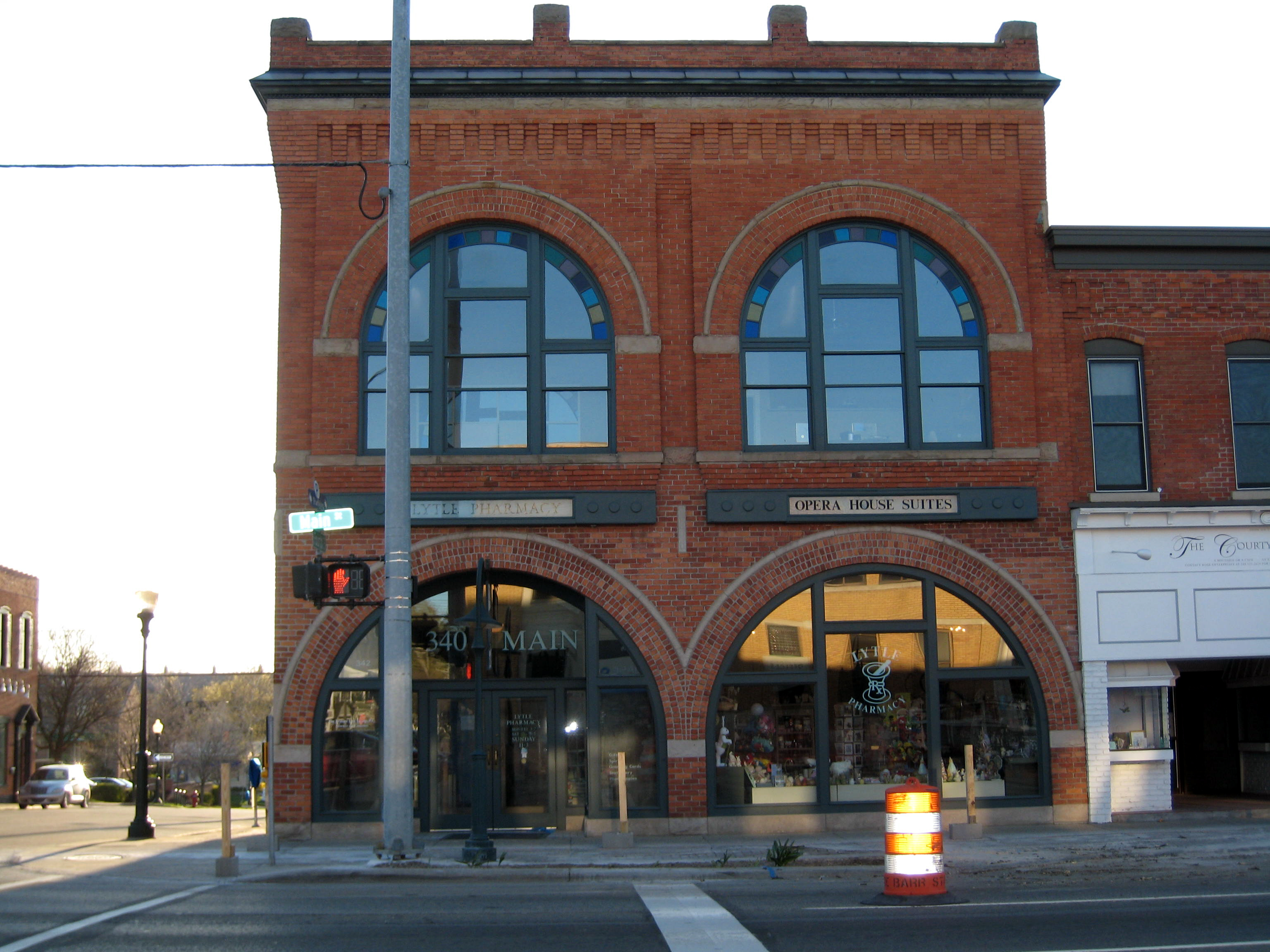 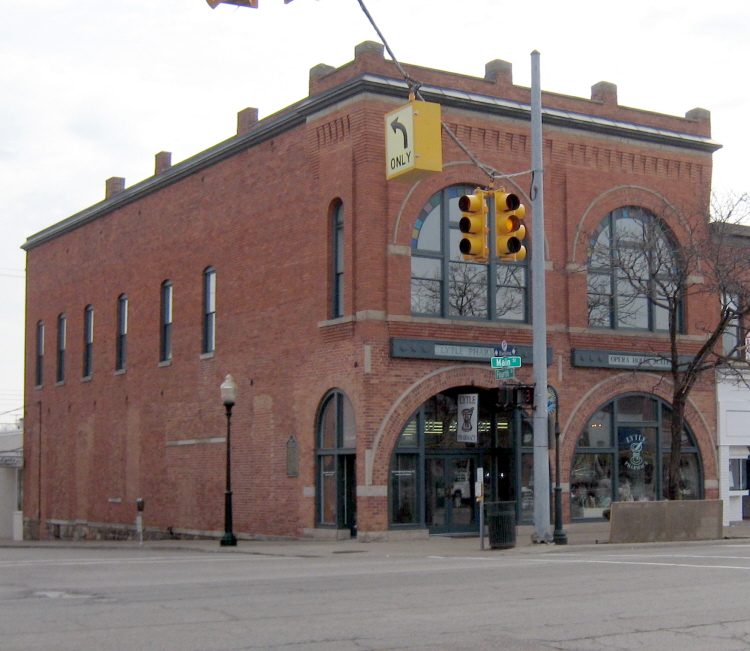 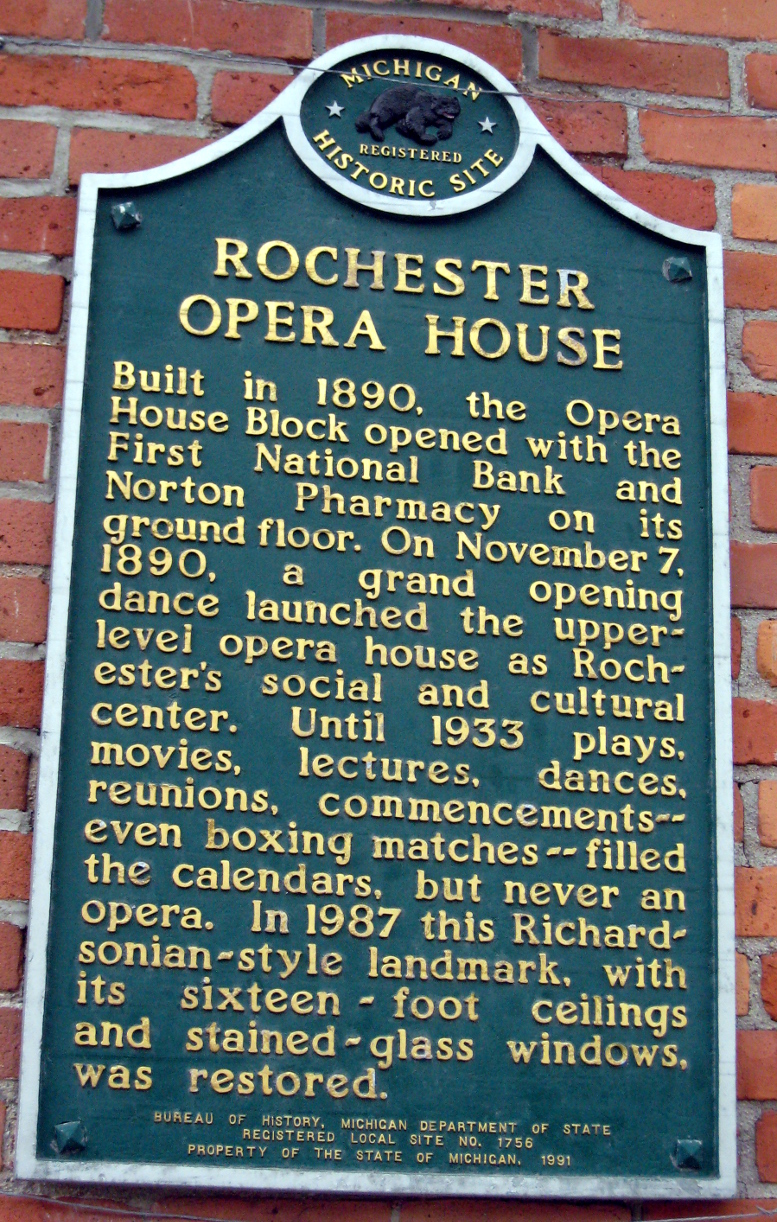 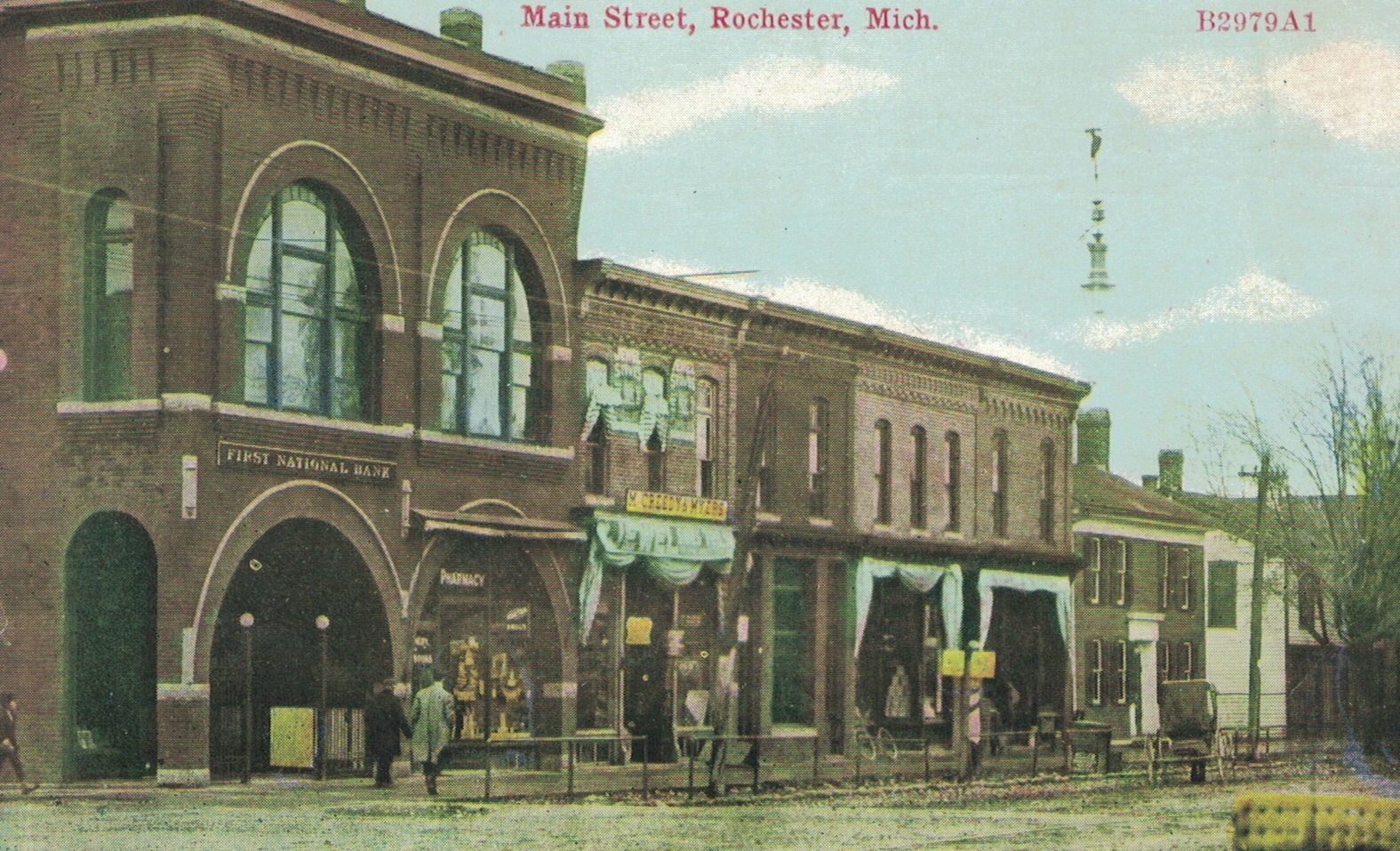 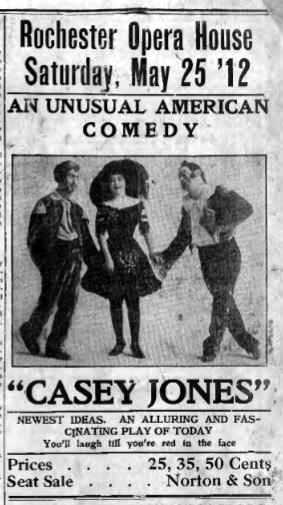 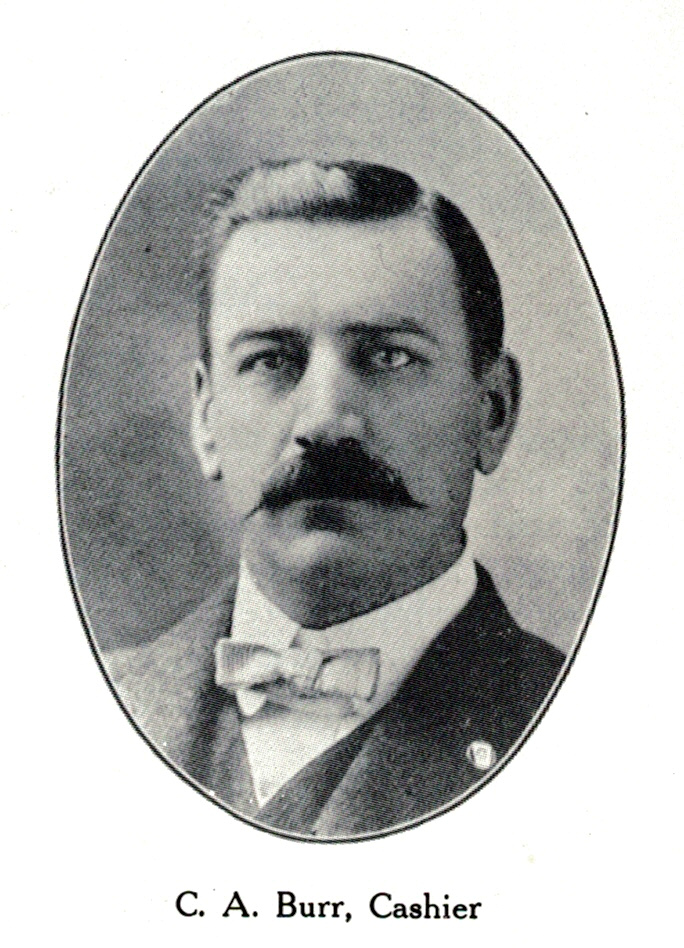 Newspaper advertisement for dancing lessons at the Rochester Opera House, 1914 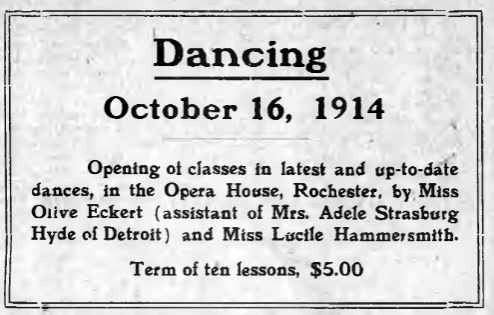 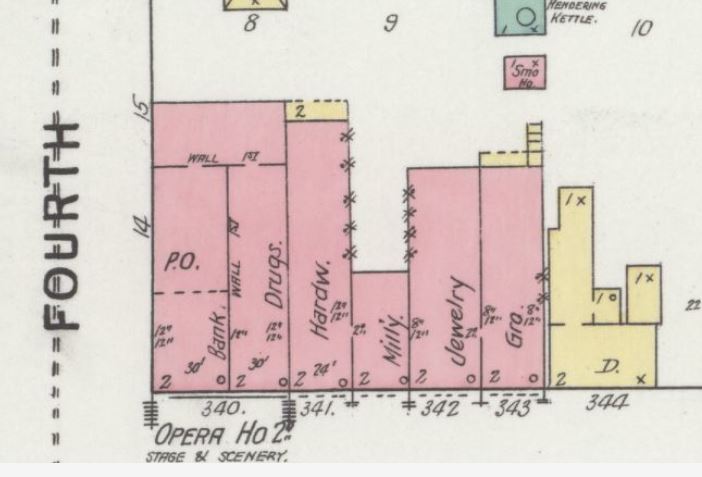 Built in 1890 by Charles A. Burr, the Opera House Block opened with the First National Bank and Norton Pharmacy on its ground floor. On November 7, 1890, a grand opening dance launched the upper-level opera house as Rochester's social and cultural center. Until 1933 plays, movies, lectures, dances, vaudeville shows, reunions, commencements--even boxing matches--filled the calendar, but never an opera.

Rochester's correspondent to the Utica Sentinel newspaper described the new opera house this way in the issue of November 15, 1890:

"C.A. Burr's new opera house is now complete. A fine outfit of scenery is being added which was purchased of Schlosman & Handis, Chicago. Mr. Barber, Frank Tucker's advance agent, says it is the finest lot he ever saw. The house is arranged to suit five hundred people, the seats all being of comfortable chairs. The new and complete opera house will be opened by Frank Tucker's Comedy Company, on Friday and Saturday nights this week, Nov. 14 and 15. On Friday night they will play "The Divorce," a pleasing and funny comedy, and on Saturday night "The Two Orphans." The fact that a new opera house is to be opened in Rochester, and that by as popular a company as Tucker's ought to ensure a full audience for two nights."

John T. Norton was the first drug store proprietor in the building, and his store was followed by the pharmacies of Albert E. Stanley, Zeno Schoolcraft, T. Kenneth Fetters, Richard J. Morley, and Robert A. Lytle. Charles A. Burr was one of eight sons of German immigrants Louis and Eliza Gendrick Burr, who came to America in 1850 and soon thereafter settled in Sterling Township in Macomb County. Charles Burr was truly a "man of all trades" and had a varied career that followed several occupational paths. He started out as a school teacher, traveled to California in 1876 to mine gold for three years, then returned to the Utica area to run a hardware business. He brought his hardware business to Rochester in 1882 and also served as the town postmaster for a time. Among the other businesses he engaged in while in Rochester were undertaking, men's clothing, real estate, and fire insurance; he also served as an agent for the local express company.

In August 1893, the Rochester Era reported that Charles A. Burr had been appointed postmaster of Rochester, succeeding Theo Dahlmann, and intended to move the post office from its location in the Hacker Block (where it had been since 1890) to the Opera House. The newspaper reported as follows:

C. A. Burr was appointed postmaster of Rochester, vice Theodor Dahlmann, last Saturday, and will take possession in a short time. Mr. Dahlmann has made an excellent official - efficient, painstaking and methodical - and has made a record that any man may well be proud of. Mr. Burr will remove the office to the rear of the opera house block.

On September 29, 1893, the Era reported further as follows: "C. A. Burr has received his post office credentials and will take possession as soon as the new quarters are ready. A window and a single door have been cut through the north side of the building."

Charles A. Burr was born in Detroit, Michigan in 1857, and reared on his family's farm near Utica. He had a varied career that included roles as a schoolteacher, hardware merchant, undertaker, furniture dealer, U.S. postmaster, and banker. He was one of the founders of the State Savings Bank of Rochester.

According to a Rochester Clarion photo item in the July 18, 1957 issue, the one-story-plus basement addition to the rear (east) end of the building which provided an entrance to the drug store off Fourth Street was built in 1957. In 1987 this Richardsonian-style landmark, with its sixteen-foot ceilings and stained-glass windows, was restored by owner Robert A. Lytle. The building was listed on the Michigan Register of Historic Sites in 1990 and features a Michigan Historical Marker on the north wall.

"The shelving and counters under the new Opera house are nearing completion," Rochester Letter in Utica Sentinel, October 4, 1890.