Founded in 1896, the Montana Veterans' Home in Columbia Falls is a historic retirement home for veterans. Situated next to the Flathead River, the home encompasses around 147 acres and consists of several historic and modern buildings, a cemetery, an orchard, and fields. The historic buildings, orchard, fields, and cemetery comprise the Montana Soldiers’ Home District, which is listed on the National Register of Historic Places. Contributing buildings include Old Main (1896), the Commandant's House (1900), the Women's Dorm (1904), the Service Building (1917), and the Dairy Barn (1921). The buildings were designed in a variety styles. For example, Old Main, the first building erected on the campus, is an excellent example of Queen Anne architecture. Perhaps its most interesting feature is the gable on the front facade that features a cupola, flagpole, and a semi-circular opening with a balcony. To be admitted into the home, veterans must have been honorably discharged from the military. Spouses are allowed to live here as well.

Old Main, the original veterans' home building, was constructed in 1896. 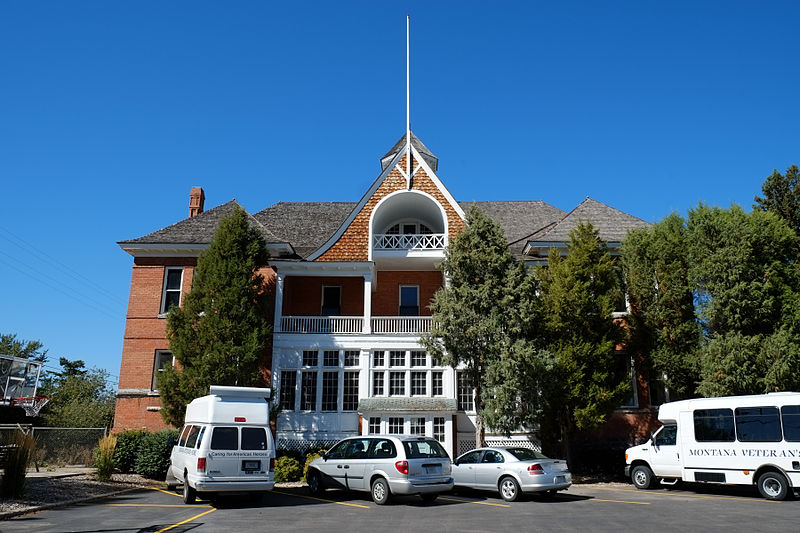 The idea for the veterans' home originated during the 1894 encampment of the Montana Department of the Grand Army of the Republic (GAR), which was a national organization of Civil War veterans. It became clear to the men who attended that many of their fellow veterans could not longer take care of themselves and needed help. At the time there were around 2,500 Civil War veterans living in Montana.

To remedy the situation, the Department and the governor at the time, J.B. Rickards, worked to lobby the Montana legislature to pass a bill establishing the veterans' home. The bill required that the home be a minimum of 40 acres in size, have water rights for irrigation, and, interestingly, be within at least one mile of a business that sold liquor. Another condition was the residents had to be financially unable to take care of themselves. A company owned by the Great Northern Railway donated the property for the project. The home was dedicated on May 30, 1896.

In 1900, a hospital was built (it was later demolished) as the facilities in Old Main were insufficient. A few years later in 1904, the Women's Home was built to provide housing the widows and wives of the veterans at the home. A second hospital was built in 1908 (it was also demolished). As noted above, additional buildings were constructed in the coming years. Residents, if they were able to, were required to participate in a number of activities to sustain the home. These include harvesting and storing crops, canning fruits and vegetables, raising livestock, and maintaining the orchard. In 1984, gardening and farming activities ended as it was cheaper to simply buy food.

The cemetery contains around 800 graves of both men and women. The men interred here served in nearly every war since the Civil War. These include Medal of Honor recipient Frederick C. Hunt, who died in the Great Sioux War of 1876; Franc Collar, who served in World War I and was killed in France; and William H. Gregg, who served in the Civil War and was known as the "father of Demersville." While many of the women buried here were widows, there are some who were veterans as well.