This is a contributing entry for Pontchartrain Conservancy's New Canal Lighthouse and only appears as part of that tour.Learn More.

With the mantra “Save Our Lake” marking the birth of the Lake Pontchartrain Basin Foundation (LPBF) in 1989, it was clear that Lake Pontchartrain’s water quality was issue #1. At that time, the lake and many north shore rivers were closed to swimming due to contamination with fecal coliform bacteria. LPBF started tackling this issue immediately with water quality monitoring in Lake Pontchartrain and investigations into pollution sources. On the south shore, it soon became apparent that much of the bacteria entering the lake came from broken pipes in Orleans and Jefferson Parishes sewer systems. LPBF began to work with the parishes to clean up these sources. By 2000, water quality monitoring indicated that we were having success and the Lake’s bacteria level was dropping, particularly on the south shore.

Save Our Lake Campaign 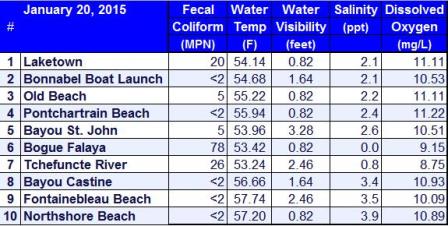 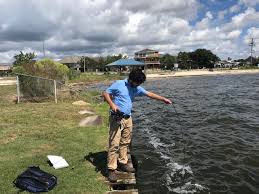 LPBF samples ten recreational sites on a weekly basis utilizing EPA-approved methods. The “weekly” sites are each tested for the physiochemical parameters of water temperature, dissolved oxygen, salinity, conductivity, and Secchi Disk clarity. All physiochemical parameters are sampled three times and averaged for a daily value and for quality control purposes. Turbidity is also monitored, where the “average” function on the turbidimeter is employed to average ten readings. To test the safety of the water for recreation, LPBF samples two bacteria that are indicators of contamination with waste, fecal coliform and Enterococcus. Fecal coliform and Enterococcus “grab” samples of 100 ml volume are collected at each site in sterile containers and taken to local EPA-approved laboratory for analysis within six hours of collection. The results can be seen on the LPBF’s weekly-data-report webpage (linked to below) and in local media.

To document the Lake’s water quality and encourage people to return to the lake, LPBF started the “Basin-wide Water Quality Monitoring Program” in 2001. In this program we perform weekly water quality monitoring at ten recreational sites around Lake Pontchartrain. The program has three goals:

1.     Disseminate water quality information to the public on a weekly basis;

2.     Identify sources that contribute to the pollution of the lake;

To date, the LPBF has collected over 8000 water quality samples at the ten weekly sites. These data have shown that Lake Pontchartrain is suitable for primary contact recreation (with high fecal coliform and Enterococcus levels observed only following rain events). With public access to the data, there has been a significant increase in utilization of the Lake for boating, fishing, swimming, and other water activities. In contrast to the health of Lake Pontchartrain, data has shown that waterways on the northern shore of Lake Pontchartrain (including St. Tammany and Tangipahoa Parishes) are being degraded due to rapid development and the inconsistent sewage treatment associated with it. Go to the Sub-Basin Pollution Source Tracking Program, as well as our other water quality programs listed below to learn more.