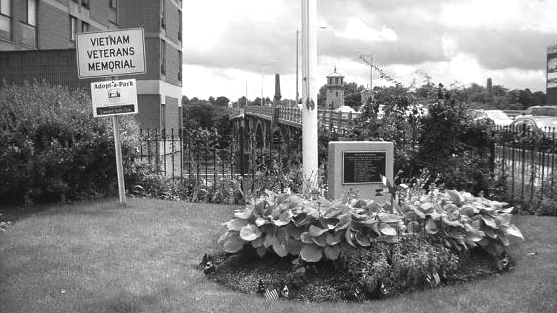 Originally, Haverhill was ahead of the curve when honoring Vietnam veterans. The Basiliere Bridge was named for Haverhill’s first Vietnam War casualty, Ralph Basiliere, who died during the early years of the engagement. Later, at the north end of the bridge, a flagpole and a plaque which read, "The city of Haverhill is grateful to those who paid the supreme sacrifice in the Vietnam Conflict," and listed the 13 lost from Haverhill during the war were added. Unfortunately, the memorial fell into poor condition over the years and was vandalized.

In 2018, Louis Fossarelli, a Vietnam War veteran himself, asked the city if it might move the memorial to "a better location that would better suit the Memorial and the aging Vietnam Veteran population" and a Vietnam Veteran Memorial Commission was formed. The commission is made up of city councilors, veterans, and community representatives and is chaired by Ralph Basiliere, grandson of the bridge's namesake and a veteran as well. The decision was made to the move the memorial to Mill Brook Park and an entirely new memorial was proposed. The original memorial was respectfully buried at Mill Brook Park, beneath the site of the new memorial, due to the vandalism.

Despite the ongoing COVID-19 pandemic, the new memorial entered its final stage of construction in April 2020 with an expected completion date of Fall 2020. The project is expected to cost about $175,000 and has been funded through a combination of state grants, private donations, in-kind donations, and fundraisers, and it is being installed by Atwood Memorial, a company who has been responsible for a number of local monuments. The memorial will include a 13-foot tall obelisk (in honor of the 13 from Haverhill who died) weighing around seven tons which will honor all of those who served in the Vietnam War. There will also be a new plaque to replace the one buried from the old monument. Finally, this new memorial will include an educational element, with four additional brass plaques about topics such as Agent Orange alongside a supplementary app. The obelisk and the plaques markers will all be made of granite quarried from Barre, VT, the same quarry that provided the granite for the original memorial.