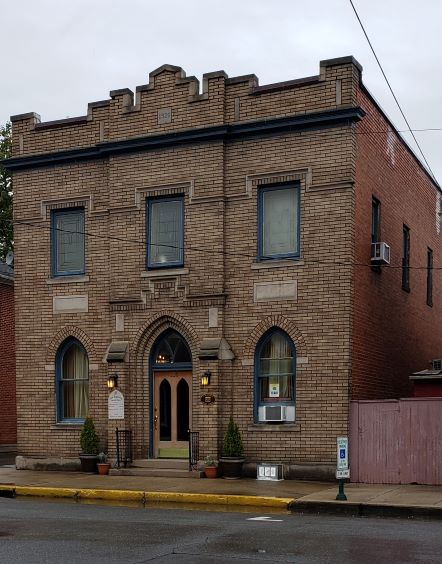 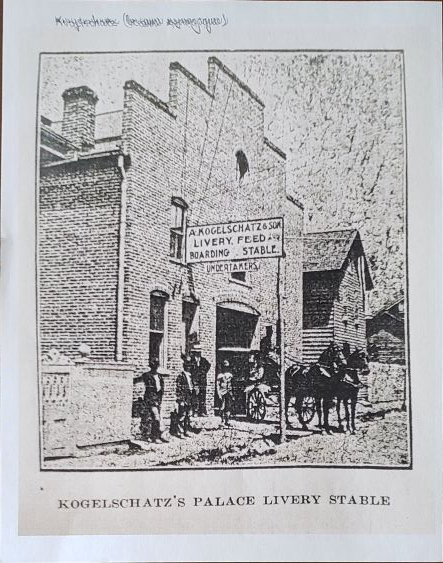 The building at 126 W. Martin St. Beth Jacob Synagogue was originally constructed in 1913. The building is a small two-story structure of light-colored brick with a most varied façade. The center of the building has three bays that breaks slightly from the wall to form a pavilion supported by buttresses at its corners flanking the first-level entrance. The entrance and flanking bays are in gently pointed arch bays. Window sashes are 1/1. The entry door has two full pointed panels of glass and is beneath a transom of two pointed panes with center lozenge. A double brick course projects above the entrance stepped in the center. Second-level windows are flat-headed beneath a projecting lintel which drops, then continues as a string course, dropping on the pavilion below the outer bay line. Then climbs in stepped fashion to a pointed center section. Above the pavilion is a simple molded cornice supporting a parapet with corner pedestals. Sills, impost blocks, panels and plaques of a lighter material are used at several places. On the front top center of the building is a plaque with 1926.

Before 1912, the Jewish Community met in homes but for the High Holy Days such as Rosh Hashna, and Yom Kippur, the community rented rooms in the Odd Fellows Hall which was located at Burke and Queen St. The community purchased the old Brethren Church at 128 Pennsylvania Avenue in 1913 where the Bash Yankev (House of Jacob in Yiddish) Synagogue was born. In the 1930s a religious school was formed. The school closed during World War II but reopened in 1949. In 1938 the congregation started using the anglicized version Beth Jacob instead of Bach Yonkev.

Prior to 1952 the building at 126 West Martin Street was known as Kogelshatz & Coffman Funeral Home and at one point was also known at “A. Kogelshatz’s & Son Livery, Feed, Boarding Stable – Undertakers.” In 1952, the Beth Jacob Congregation purchased the building and remodeled it to serve as a synagogue and Jewish Community Center. During this time Beth Jacob Congregation moved from its Orthodox affiliation towards the Reform mode of worship and joined the Union of American Hebrew Congregations.

The location of the synagogue on West Martin street was located to many of the Jewish owned businesses in downtown Martinsburg. The two story building is located one block from North Queen Street. The first floor of the building was the sanctuary and accommodated as many as 100 worshipers. The Synagogue’s seating was donated from the Warner Theater whose manager was part of the Jewish community. The second floor was used as a recreation room and center.

By the 1990s only a few Jewish businesses remained in downtown Martinsburg and the synagogue had long fallen into disrepair. Services were only held one Friday night due to the shul only having ten members left. The building at 126 West Martin was sold in 2008 and The Beth Jacob Synagogue Congregation dissolved and its property distributed in 2009. Today the building is known as New Beginning Apostolic Church.