Located at the southeast corner of Fifth Avenue and Ninth Street, the Fifth Avenue Hotel was one of several hotels clustered in downtown Huntington during the early twentieth century. The hotel was built at the site of Huntington’s first church, the First Congregational Church, which was constructed in 1874. After the congregation moved to a new location in 1908, businessman Hansford Watts purchased the property, demolished the church, and erected the Fifth Avenue Hotel, a three-story building with a red brick exterior. The hotel, which opened for business in 1910, had over one hundred rooms along with commercial spaces on its ground floor. The hotel’s basement also housed several restaurants over the years, including Bailey’s Cafeteria and Snaks Fifth Avenue. Economic and demographic changes over the second half of the twentieth century led the Fifth Avenue Hotel, along with many other downtown hotels, to lose business and eventually shut down. After the hotel closed during the 1980s, it was repurposed into an apartment building, which is currently called Fifth Avenue Apartments. 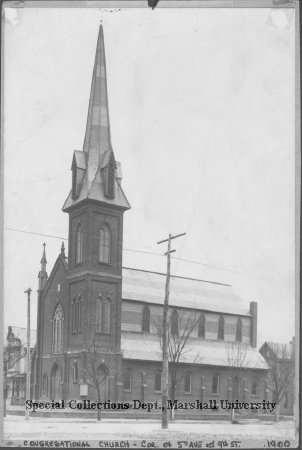 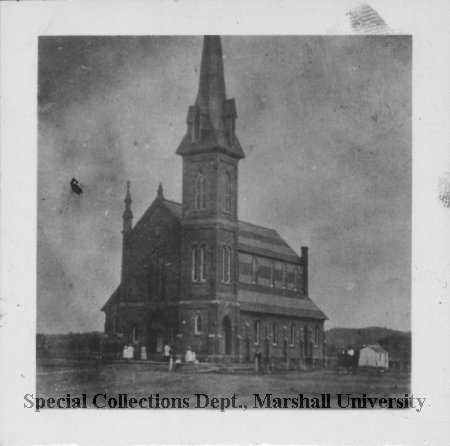 View of the First Congregational Church, circa 1910 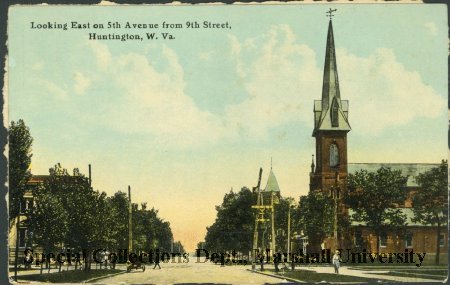 Construction of the Fifth Avenue Hotel 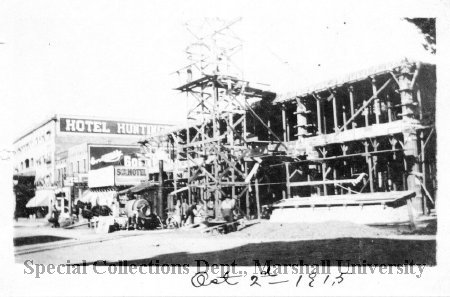 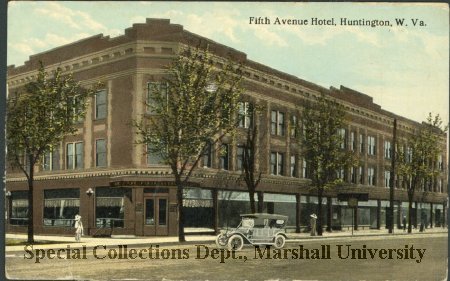 The Fifth Avenue Hotel and the Union Statue, circa 1915 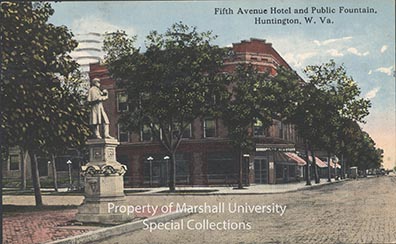 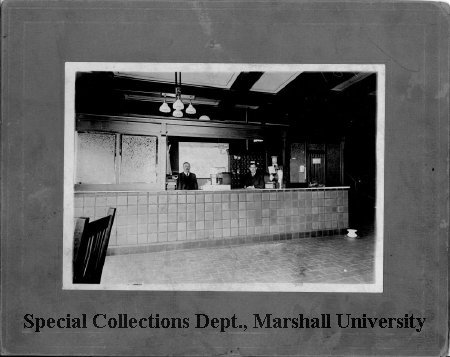 Postcard of the Fifth Avenue Hotel, circa 1910s 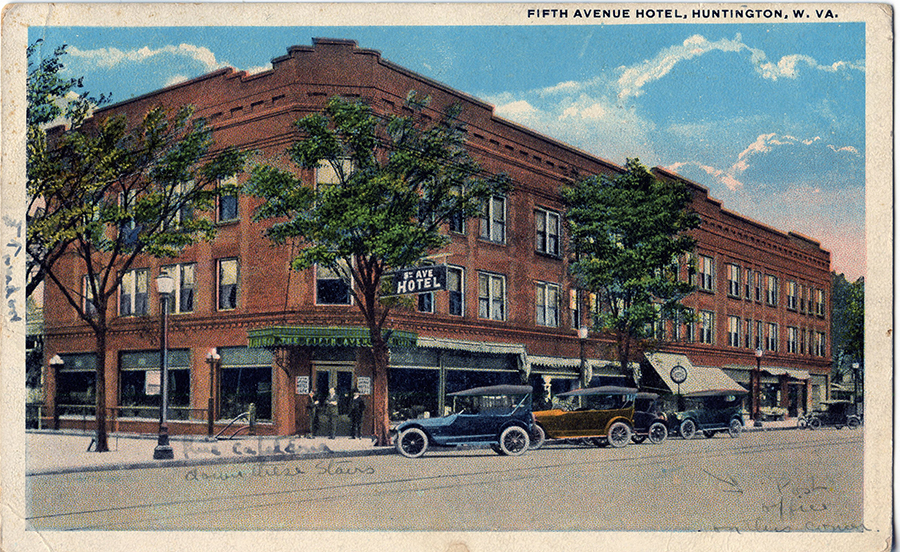 The Fifth Avenue Hotel, circa 1917 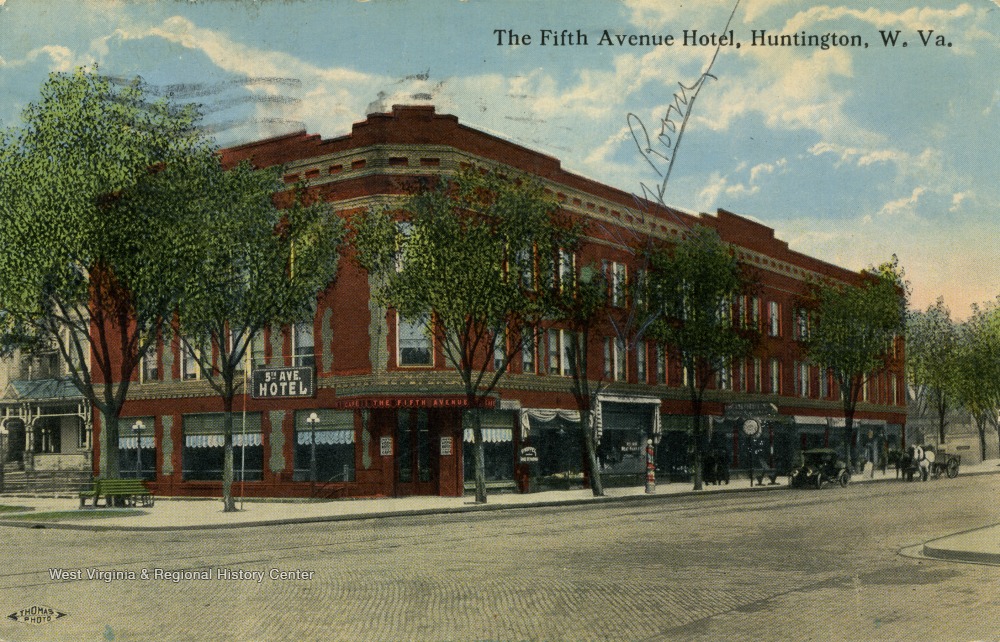 Illustration of the Fifth Avenue Hotel 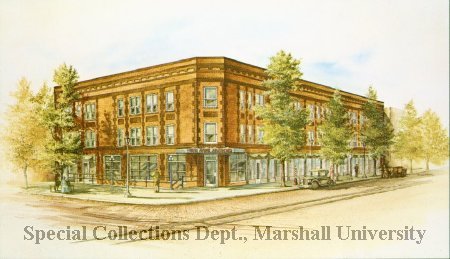 The Fifth Avenue Hotel, circa 1941 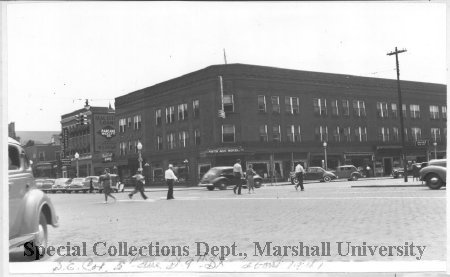 The entrance to Snaks Fifth Avenue 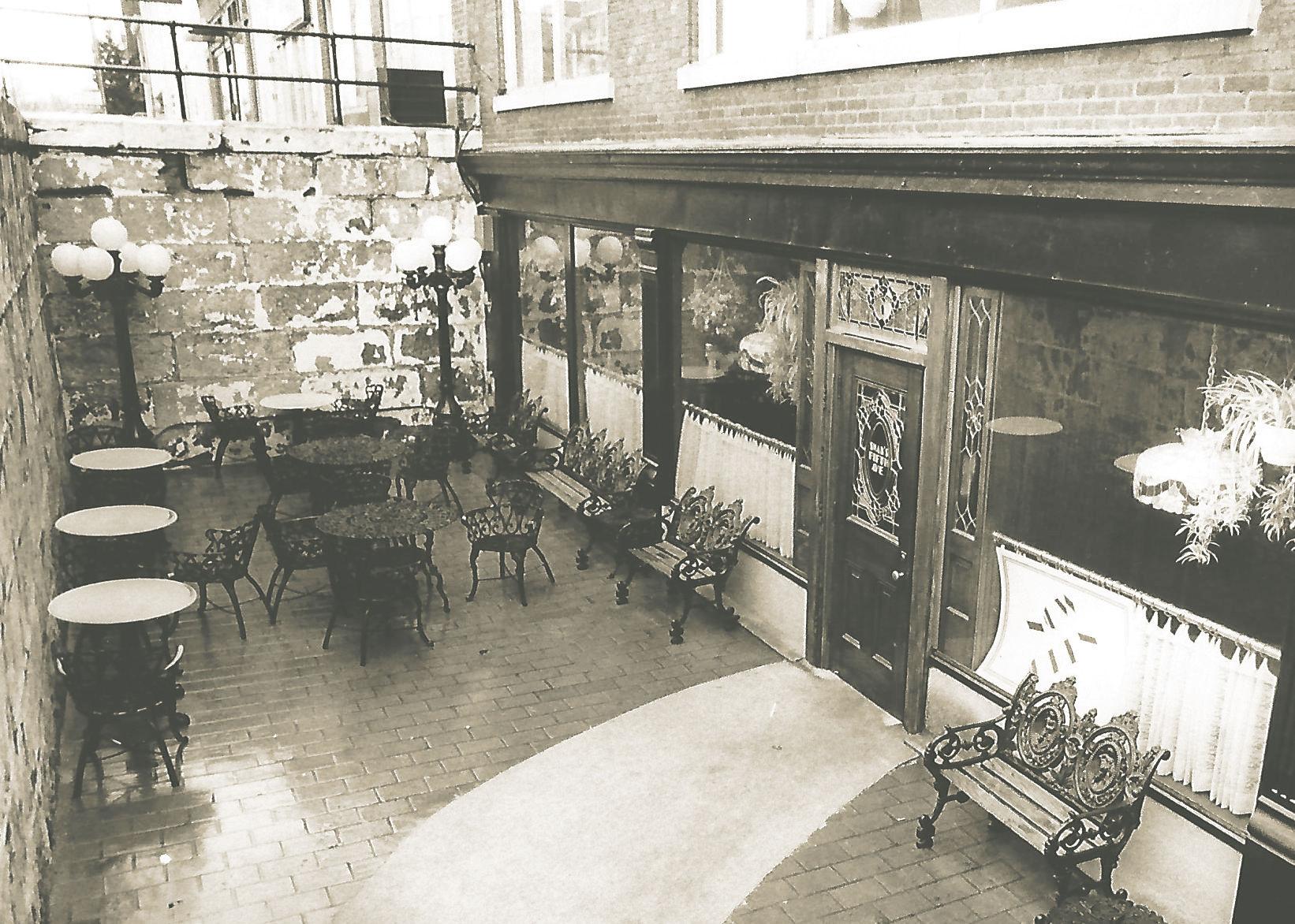 The southeast corner of Fifth Avenue and Ninth Street was originally the site of Huntington’s first church, the First Congregational Church. The congregation was organized in June of 1872, just one year after the city was incorporated, and the church building was completed by 1874 on land that was donated by Collis P. Huntington. The church was designed by Rembrandt Lockwood, a New York City architect. In 1908, the congregation relocated to a new church at 701 Fifth Avenue, where it still worships today. The former church was sold to businessman Hansford Watts, who demolished the structure in order to build the Fifth Avenue Hotel.

Hansford Watts was born in Wayne County, West Virginia on February 4, 1873. After working at a mill and as a Deputy United States Marshal, Watts came to Huntington in 1896. There, he partnered with Walter Davis to open the Adelphi Hotel at the corner of Ninth Street and Sixth Avenue. In 1901, Watts founded Watts Jewelry Store, which he relocated to Ashland, Kentucky the following year. He reentered the hotel and real estate business in 1906, and went on to build several buildings in downtown Huntington. In addition to the Fifth Avenue Hotel, he was the general contractor for the Watts Building, a residential apartment building located at 414 Eleventh Street, which was built around 1920.

The Fifth Avenue Hotel was one of several busy hotels to be built in downtown Huntington during the early twentieth century. At that time, Huntington’s role as a transportation hub and emerging industrial center encouraged the construction of grand hotels such as the Frederick, the Farr, and the Prichard. A three-story red brick building with a flat roof, the Fifth Avenue Hotel was an impressive addition to the cityscape when it opened in 1910. The hotel had one hundred rooms, to which an additional thirty were added in 1917 at the cost of $25,000. The hotel’s ground floor featured large display windows for shops that lined the building’s Ninth Street side. Notably, guests with rooms on the north side of the building briefly had a view of a statue of a Union soldier, which was erected during the 1890s but mysteriously disappeared around 1915. The hotel was designed in the Commercial Style, which was popular in the United States between 1890 and 1920.

The basement of the Fifth Avenue Hotel was used as a restaurant space for many years. It was the original home of Bailey's Cafeteria, which was founded in 1934 by Morris and Sadie Bailey. Just two years after opening, the cafeteria relocated to the 400 block of Fifth Avenue, where it went on to become a beloved Huntington eatery until it closed during the late 1990s. In 1980, Snaks Fifth Avenue opened in the basement of the hotel. It was the Harrison family’s second restaurant after the successful Heritage Station restaurant at Heritage Village. Customers entered the restaurant by descending stone steps to a patio area, which featured wrought-iron tables and chairs. Inside, the restaurant was decorated with antiques, polished woodwork, cut glass, oriental rugs, and hanging plants, and the bar was made from an old Victorian room divider. Along with lunch and dinner options, Snaks Fifth Avenue offered items like potato skins, fried zucchini and mushrooms, shrimp, oysters, and cheese platters. The restaurant briefly flourished before it closed during the late 1980s.

Although the Fifth Avenue Hotel was once one of Huntington’s finest hotels, the economic boom that motivated its construction could not last forever. Between 1950 and 2000, declining economic conditions caused Huntington to lose nearly 35,000 residents. As downtown businesses struggled and shut down, the city’s once-busy hotels declined as well. By the 1970s, most of the hotels built during Huntington’s early twentieth-century heyday had shut down or were near closing: the Prichard closed in 1970, the Frederick in 1973, and the Huntington Hotel in 1976. Business at the Fifth Avenue Hotel declined significantly as well, until the majority of the hotel’s customers were railroad train crews resting between shifts. The hotel remained in business into the 1980s, but it eventually closed down and was converted into an apartment building, which currently houses the Fifth Avenue Apartments.