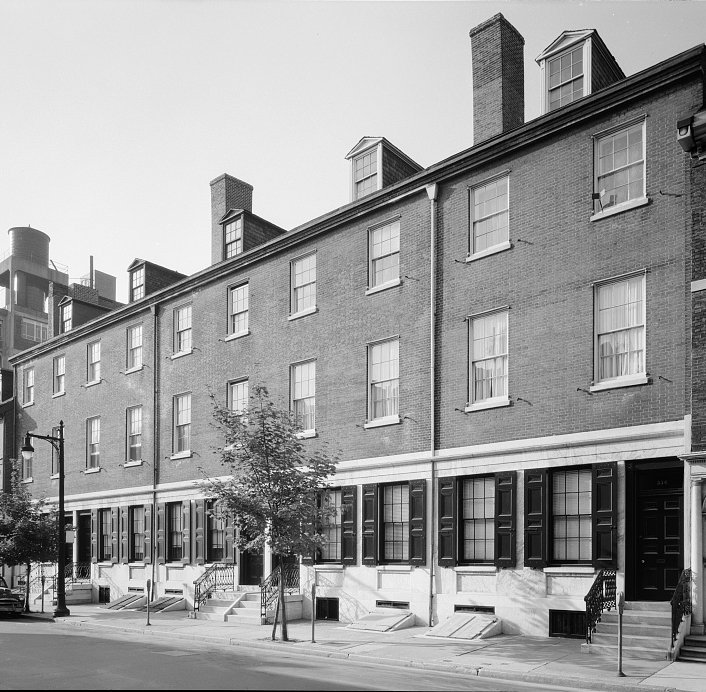 Although he himself lived on Water Street, Philadelphia merchant, banker, and philanthropist Stephen Girard (1750-1831) invested widely in Philadelphia real estate, so over time there have been several areas known as “Girard row,” including the 1100 block of Chestnut Street. This “Girard Row” of five houses on Spruce Street in the Society Hill neighborhood is a surviving example of the kind of income-producing rental buildings that Stephen Girard liked to build on his properties.

Construction on these houses began in 1831, the last year of Stephen Girard’s life. They were constructed by mason John Struthers in a restrained Greek Revival style, after Girard's specifications. The houses feature marble facades on the basements and ground floors. In an 1842 report, Struthers, who worked on a hundred Girard buildings, noted that Stephen Girard liked marble fronts and also included them on several of his rental properties on Front Street and in his plans for the Girard block between 11/12th street.

Stephen Girard died on December 26, 1831 and ownership of the property passed into his Estate, which continued the construction, completing it in 1833. Girard’s will instructed that his properties continue to be rented out, with the income going to support Girard College, a school for disadvantaged students which he also established in his will, and which still operates today. In the 20th century the Girard estate eventually sold the houses and they are now privately owned. Girard Row was included in the Philadelphia Register of Historic Places in 1957.

Private residences, not open to the public