The Olustee Battlefield Historic State Park is Olustee, FL was home to the largest Civil War battle in the state. It was the second bloodiest battle for Union forces when comparing ratios of number of troops to number of casualties. The park contains a one-mile hike that follow the battle lines of Olustee with interpretive signs telling the story along the way. There is also an Interpretive Center that features exhibits and artifacts about the Battle of Olustee. Each February there is a large re-enactment of the one-day battle.

An artist's rendition of the battle. 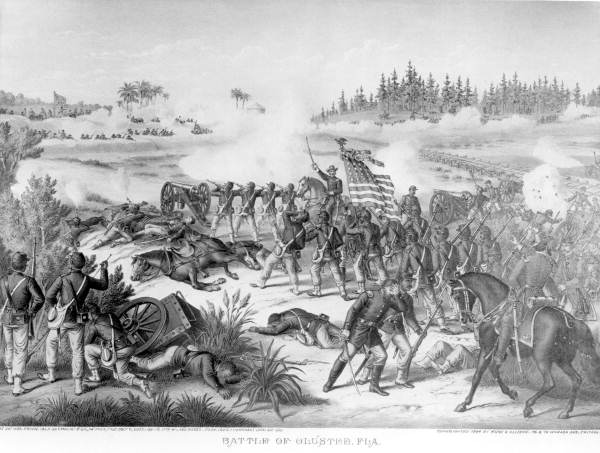 Entrance to the park. The pines in the background resemble the terrain of much of the actual fighting in the battle. 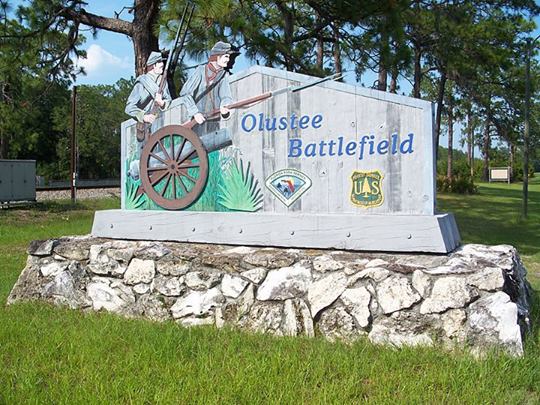 On an expedition to salvage Union enclaves, recruit African-American troops, and cut off Confederate supply lines, General Quincy A. Gillmore commanded General Truman Seymour to move deep into Florida from Union base of Jacksonville. Seymour took between 5,000 and 5,500 troops south and was very successful in occupying and conquering territory for the Union. Then Seymour began to approach Olustee.

General Joseph Finegan had 5,000 Confederate troops just outside Olustee positioned in the only defensible area surrounding them. They had positioned themselves in a corridor where the railroad passed to dry land; they were surrounded by inaccessible swamps, a bay to the south, and Ocean Pond to the north. Finegan sent his cavalry to begin minor skirmishes with Seymour’s troops as soon as he learned of their approach. He intended them to lead the Union forces to the Confederate main line along the corridor passageway.

Seymour noticed the skirmishes that were becoming more common as he approached Olustee on February 20, 1864. As they increased in intensity and frequency they became major skirmishes. Finegan noticed this as well and sent more troops two miles ahead of his line to aid in these skirmishes to the east. My midafternoon it was a full-scale battle.

The Union troops were winning the battle until a Colonel Hauley gave the wrong order to the 7th of New Hampshire. This separated them and caused mass confusion. The unit collapsed sending many scrambling to the back lines and the rest fought without clear direction. The Confederates seized this opportunity and set their sights on the 8th United States Colored Troops. This unit was untested in battle and was not yet fully trained, but even after their commander, Colonel Charles Fribley, was killed they continued to hold the line for some time. The 8th lost 300 soldiers before finally retreating.

The Confederates pushed forward until they began to run low on ammunition; they were collecting ammo from fallen soldiers until Finegan arrived with the final reinforcements from the main line. General Seymour realized that the battle was lost and sent two more units to the front to cover the retreat of the rest of the Union Army. Fortunately for the Union, the Confederates botched the end of the battle and were unable to follow through with destroying the retreating Union soldiers. The total losses of both sides were obscene: Union -203 dead, 1,152 wounded and Confederates – 93 dead, and 847 wounded.