Now the number one tourist attraction in Chicago and the Midwest at large, 3,300-foot long Navy Pier features hundreds of shops, restaurants, rides, and other amusements. Originally constructed just prior to America’s entry into World War I and named “Municipal Pier,” it was renamed Navy Pier in 1927 in honor of the nation’s maritime veterans. The enormous pier and its structures have hosted a variety of functions through the last century including a dock for commercial freight, amusement park, military training center, and even an extension campus for the University of Illinois.

Navy Pier extends more than 3,000 feet out into Lake Michigan. It formed part of Daniel Burnham's famous "Plan of Chicago," upon which many of the city's 20th Century modernizations were formulated. 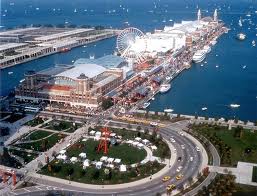 The pier as it appeared during construction in 1915. 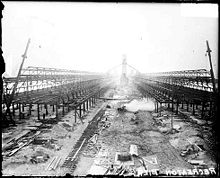 Charles Sumner Frost, architect of Municipal Pier. It was renamed Navy Pier in 1927, only a year before his death. 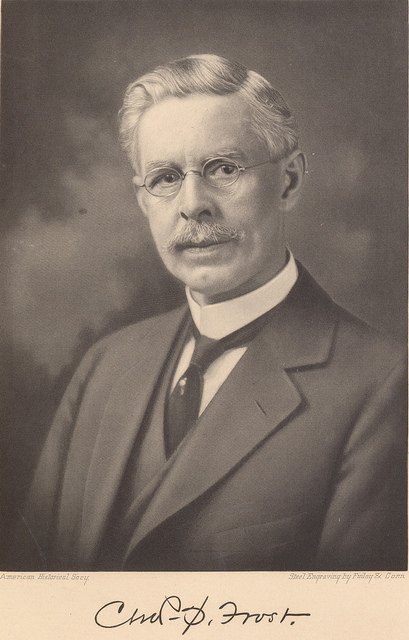 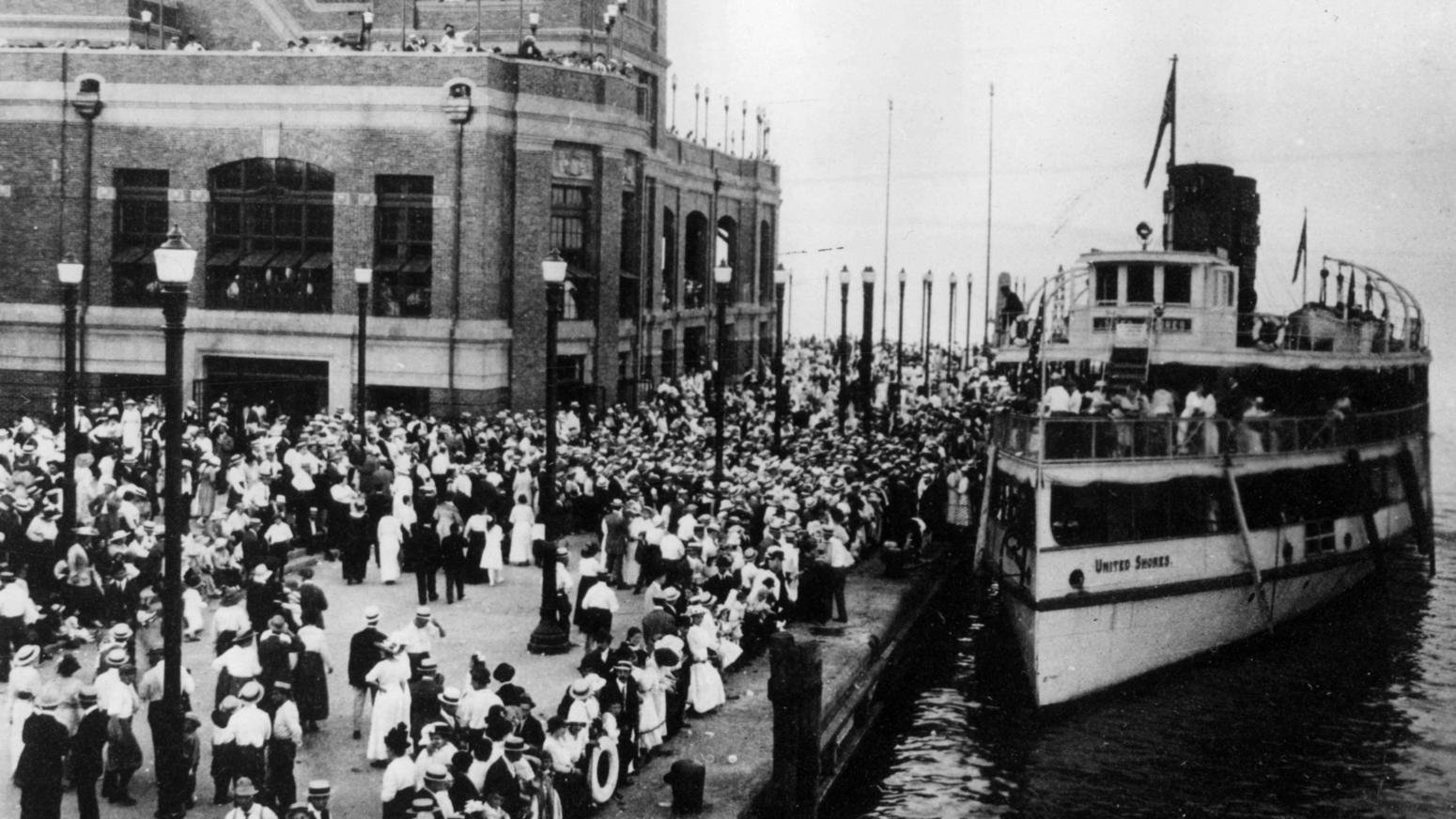 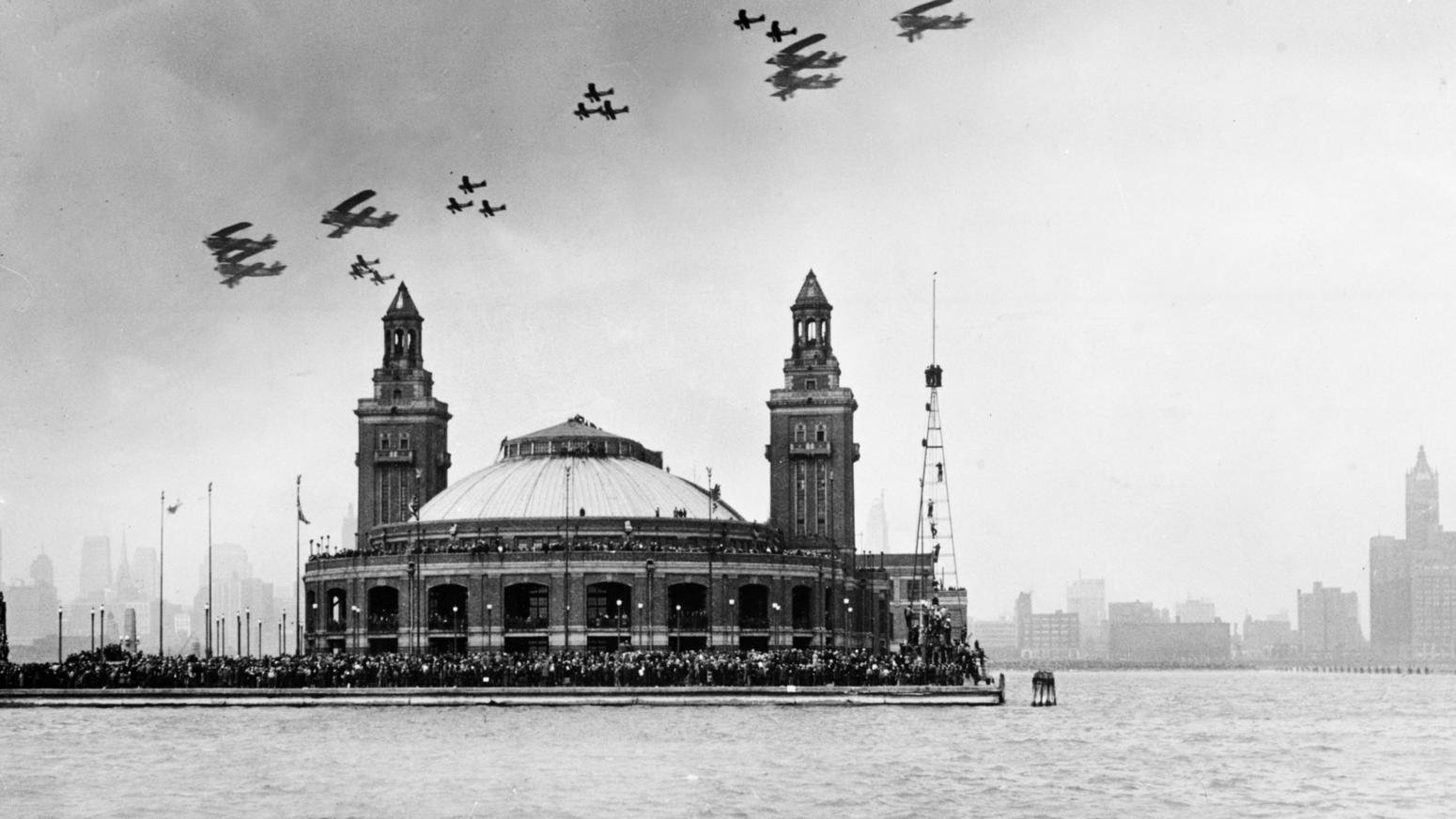 The Pier from the air on September 27, 1927. It was rechristened "Navy Pier" that very year. Chicago Tribune photo. 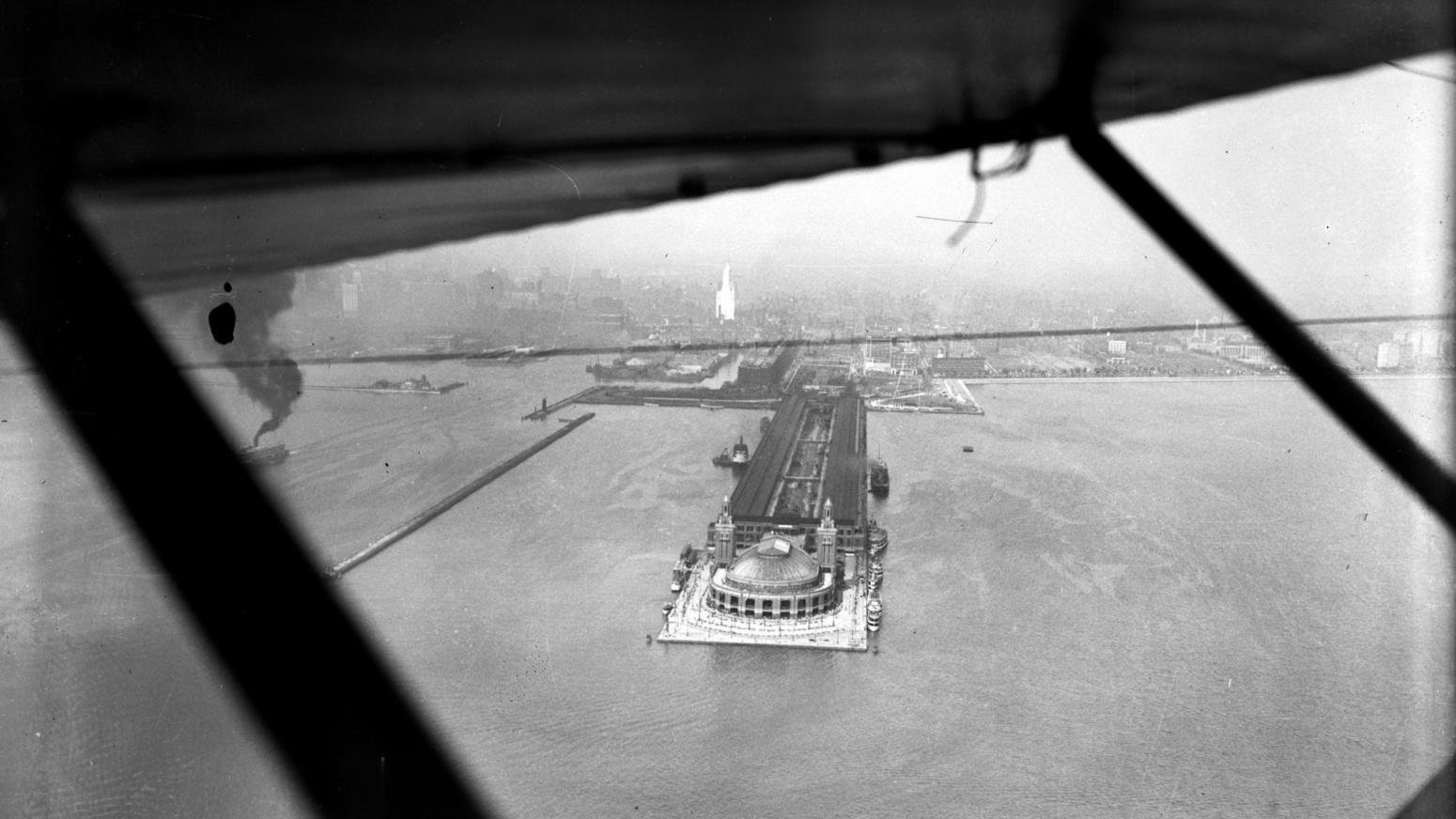 Looking east down the center of the Pier in 1921 reveals the streetcars that traveled its length along the upper level. Chicago Tribune photo. 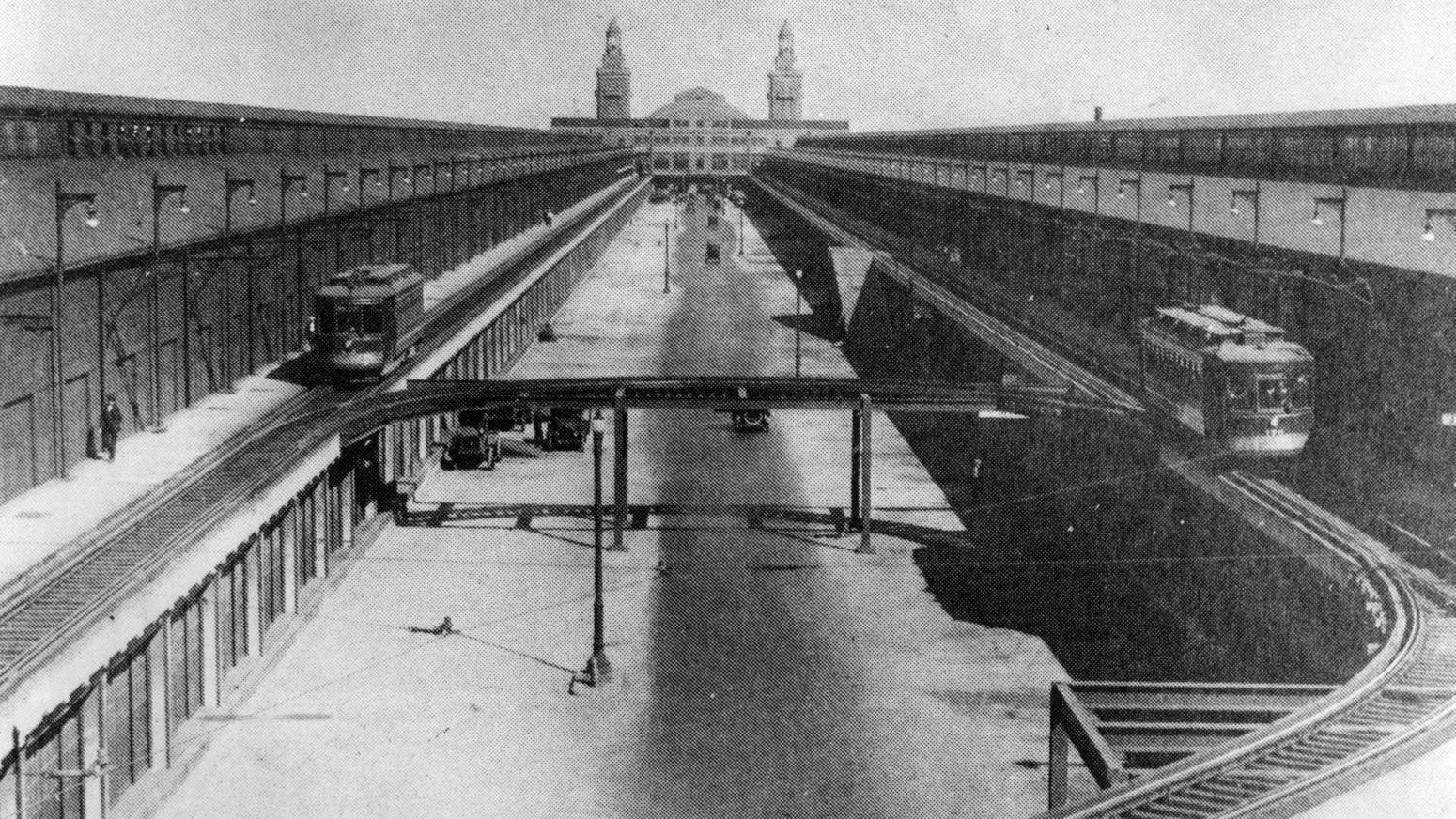 USS Wolverine (IX-64), one of two antiquated steam-powered paddleboats converted into makeshift aircraft carriers for training pilots and crews at the Navy Pier base during World War II. 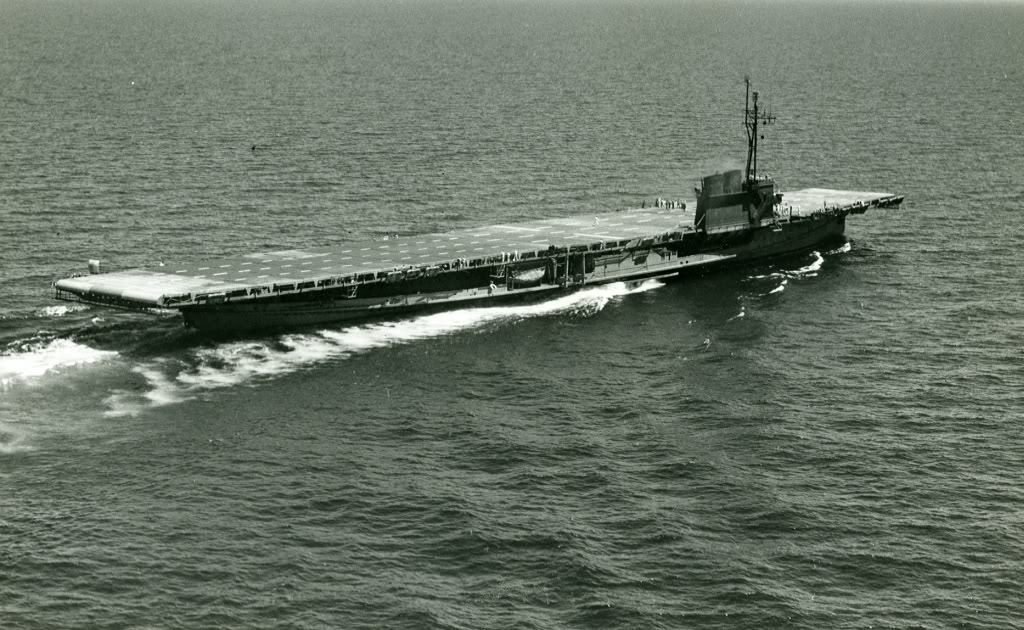 Navy trainees receive instruction at the "Diesel School" at Navy Pier in 1942. The government took over the huge facility and converted it into a Navy base during World War II. 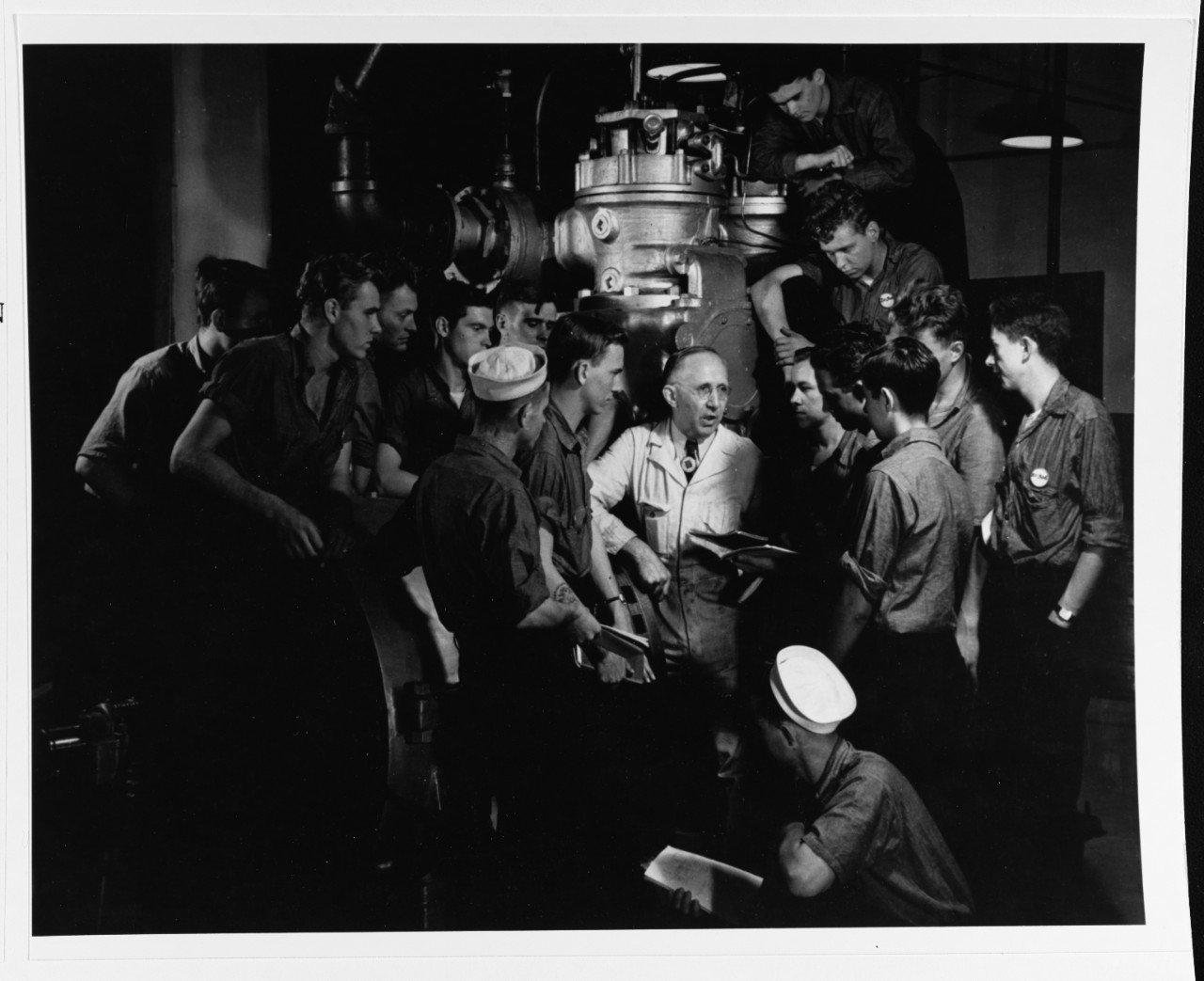 The gym and drill hall for the Navy facility in November 1942. Chicago Tribune photo. 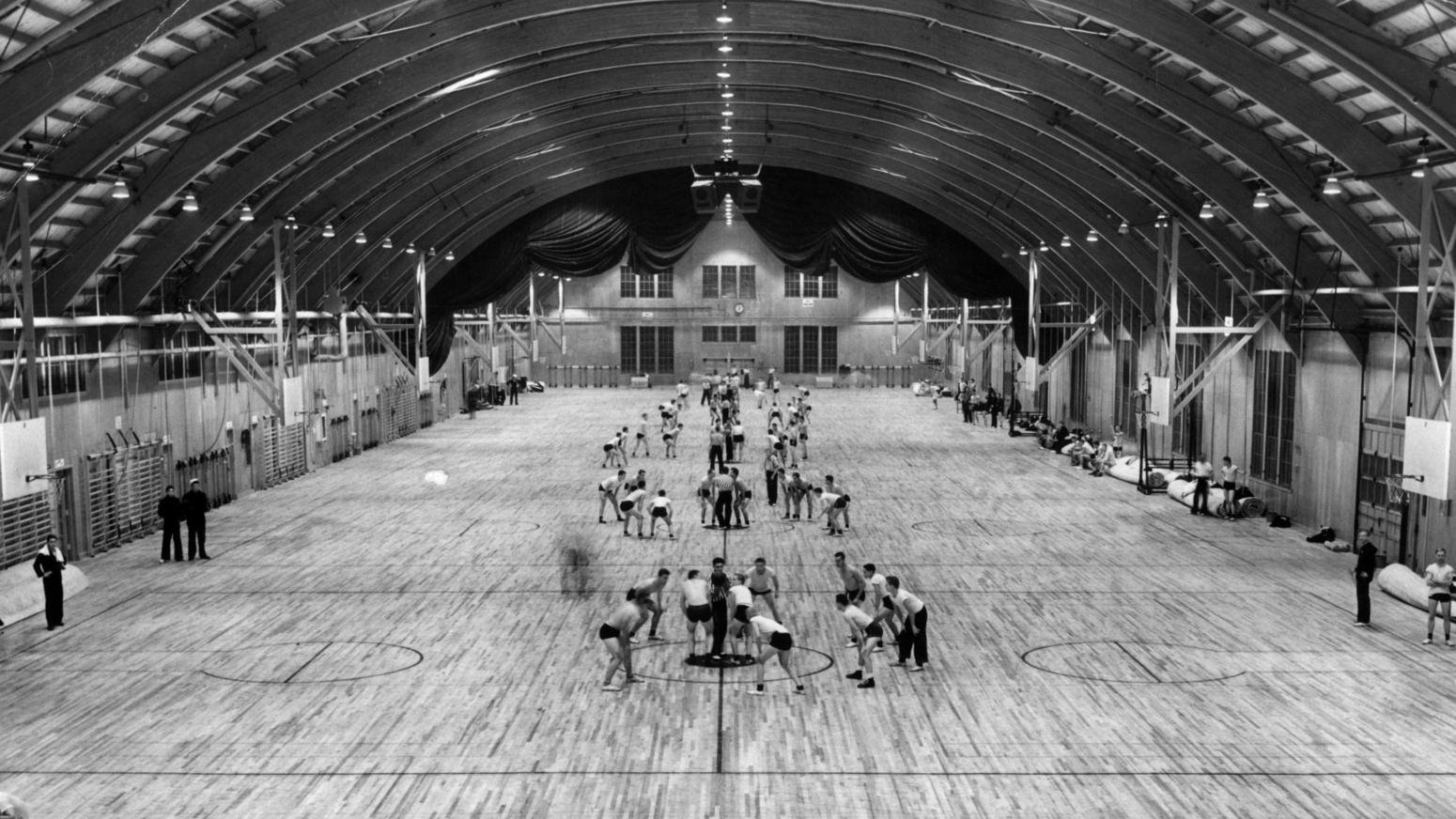 Construction workers clean up the facility in 1946, in preparation for the University of Illinois' impending move into the facility. The University's branch would remain for nearly two decades. 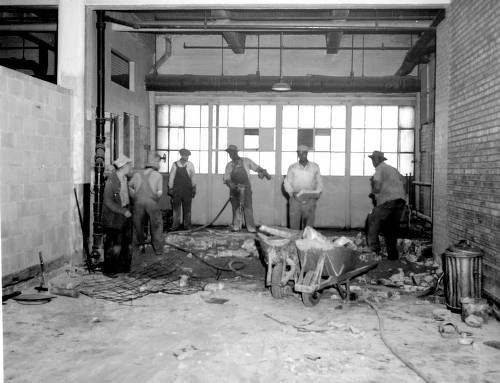 Freighters at the dock in the 1970s. Despite the appearance of this photo, commercial shipping was on the decline at Navy Pier and did little to prevent the facility from decay. 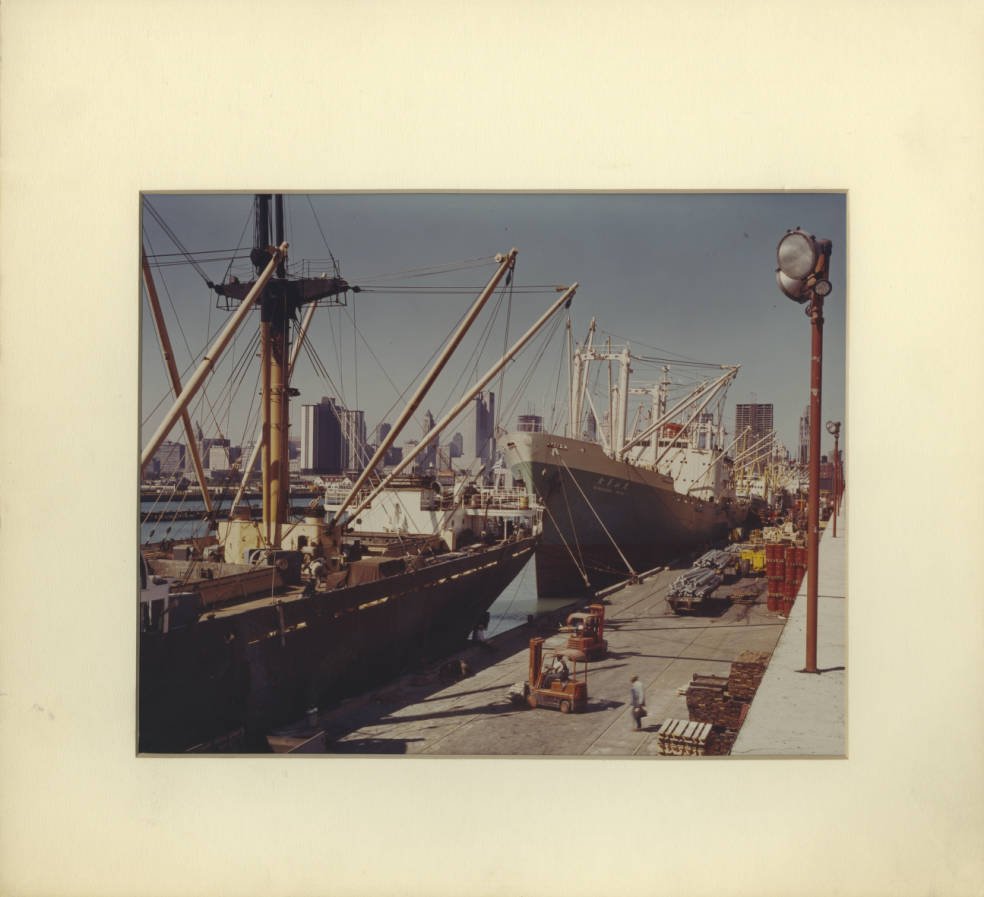 The Pier's new ferris wheel, though smaller than the one installed during the 1990s, is operable year-round with heat and air-conditioning. It was unveiled in mid-2016 in time for Navy Pier's centennial. 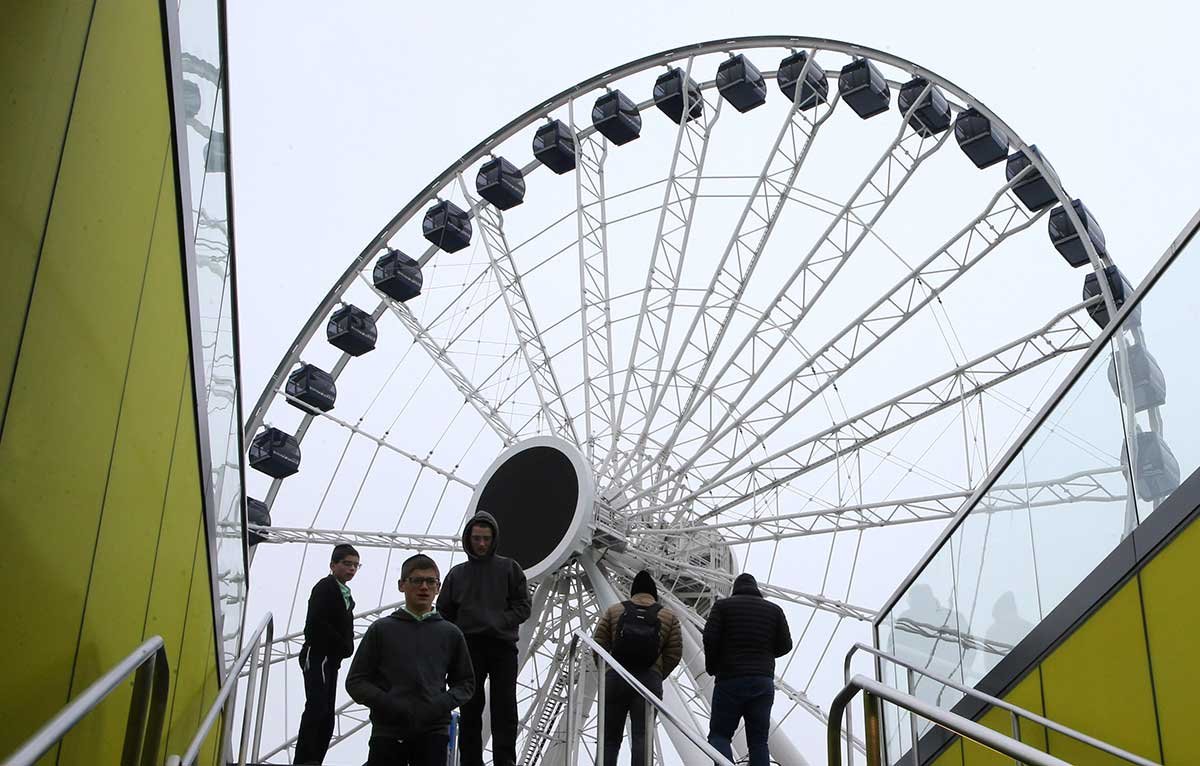 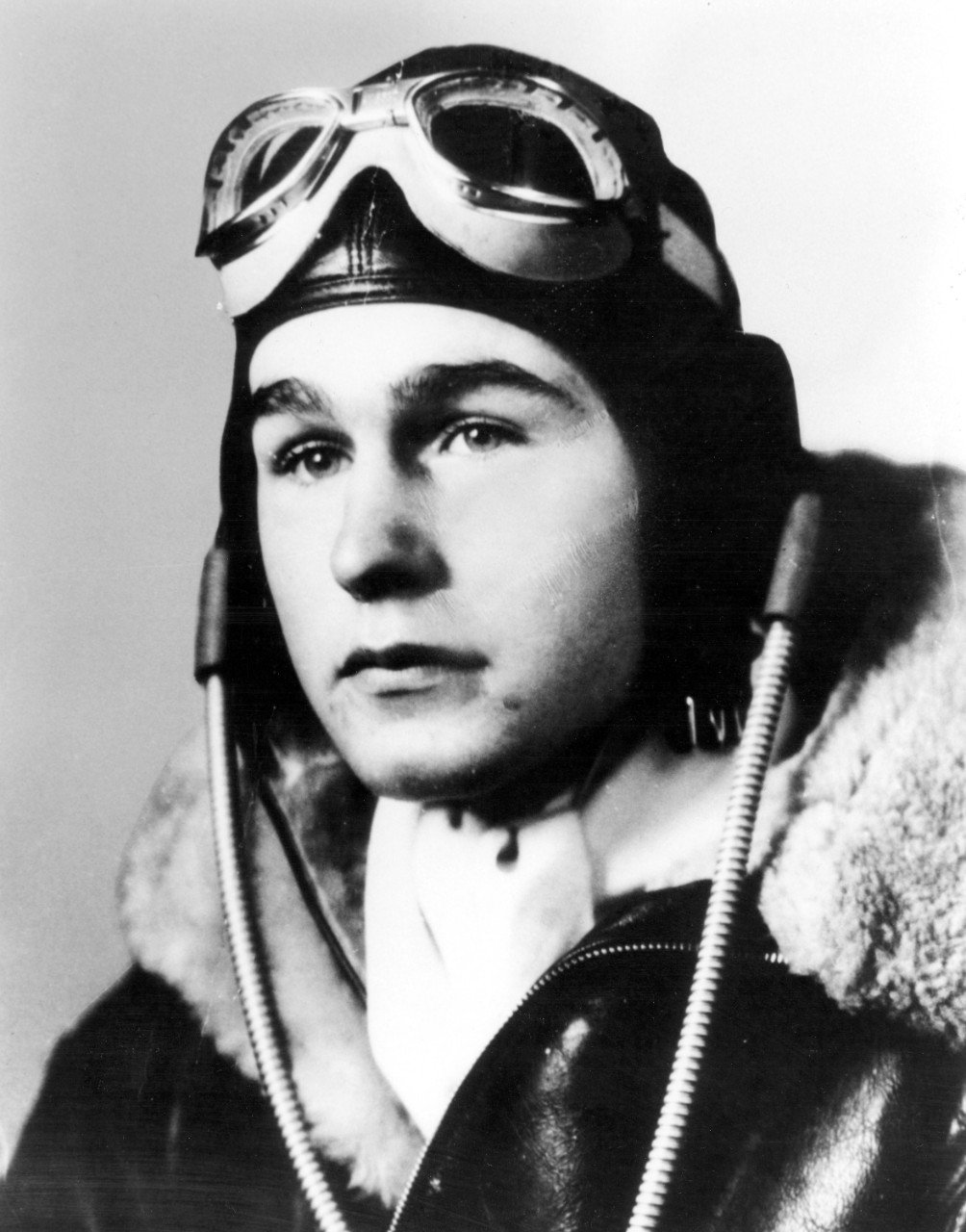 Though designed by architect Charles Sumner Frost (a MIT alumnus and architect of over 120 buildings for the Chicago & North Western Railroad), the massive 3,300 public pier that serves as Chicago’s most distinct landmark along the shores of Lake Michigan was originally envisioned as a portion of city planner Daniel Burnham’s “Plan of Chicago” in 1909. One of the most famous documents in the history of city planning, the ambitious strategy outlined six major categories of development to launch Chicago into a new century of progress. First among those principles was “the development of the lake front” as both a commercial and recreational asset.

Construction on “Municipal Pier” began in 1914 and was completed in two years at the cost of $4.5 million dollars. The grandiose industrial center opened on July 15, 1916 as a docking station for lake freighters and other commercial watercraft, but was soon to enjoy equal success as a local gathering space as advancements in automobile technology slowly peeled business away from the domestic maritime shipping industry.

In the 1920s, the pier expanded to include its own streetcar line, theatre, and emergency room, and hosted two consecutive Pageants of Progress--industrial and technological expositions not unlike the World’s Fair--in 1921 and 1922. In 1927, it was renamed Navy Pier to honor American naval personnel who served during World War I.

As the nation grappled with the Great Depression in the 1930s, the Pier used its prodigious facilities to house several New Deal agencies, though it was a far cry from the popular destination it had once been. During World War II, however, the Pier’s 680,000 square feet of industrial space proved a boon to the branch of service from whence it took its name: the Navy commandeered the Pier in August 1941 and converted it into a training facility for 10,000 men. Overnight, thousands of new aviation machinist mates, metalsmiths, and diesel mechanics were being trained for the war effort within its docks and in its huge buildings. Two “aircraft carriers” were based at the dock, though in actuality the USS Sable and USS Wolverine were antiquated paddle-wheel steamers with ad-hoc flight decks, intended not as combat craft but as trainers in the new art of naval aviation. Lake Michigan gave the Navy a place to train new carrier pilots and crews in complete safety from Japanese or German submarines. Future forty-first President of the United States, George H.W. Bush, trained as a Navy pilot at the facility.

When the war ended, the Navy handed the facility back to the city of Chicago, but it would be decades before the Pier returned to the prosperity its designers intended. Instead, a huge surge in postwar college enrollments as a result of the GI Bill caused the University of Illinois to open a branch at the Pier offering two-year degrees. Enrollments continued to surge well into the 1960s despite complaints from students that the constant noise and smell from the docks: "We have to get out of here...It's like reading poetry in a shooting gallery,” one student said to the Chicago Tribune in 1959.

The Pier indeed experienced a surge in industrial shipping that year due to the opening of the St. Lawrence Seaway, which connected the Great Lakes to the Atlantic. The revival slackened by the 1970s, however, and Navy Pier was once again on a path to disrepair. Despite being accepted into the National Register of Historic Places (as “Municipal Pier”) in 1979, no turnaround seemed possible until 1989, when it was purchased by the Metropolitan Pier and Exposition Authority and embarked on a $200 million renovation project that lasted into the mid-1990s. Installation of amusement park rides, such as a new ferris wheel, redevelopment into a mixed retail, dining, entertainment, and cultural space.

As the venerable site approached its hundredth birthday, a new slate of renovations entitled The Centennial Vision was begun in 2014 and completed in 2016, though new additions are still in progress. The current Pier includes a one-acre botanical garden and additional outdoor green space, a ferris wheel, the Chicago Shakespeare Theatre, the Chicago Children’s Museum, a hotel, boat tours, and many other attractions.