Arthur Longsjo, Jr. featured in a news article in advance of 1956 Olympics 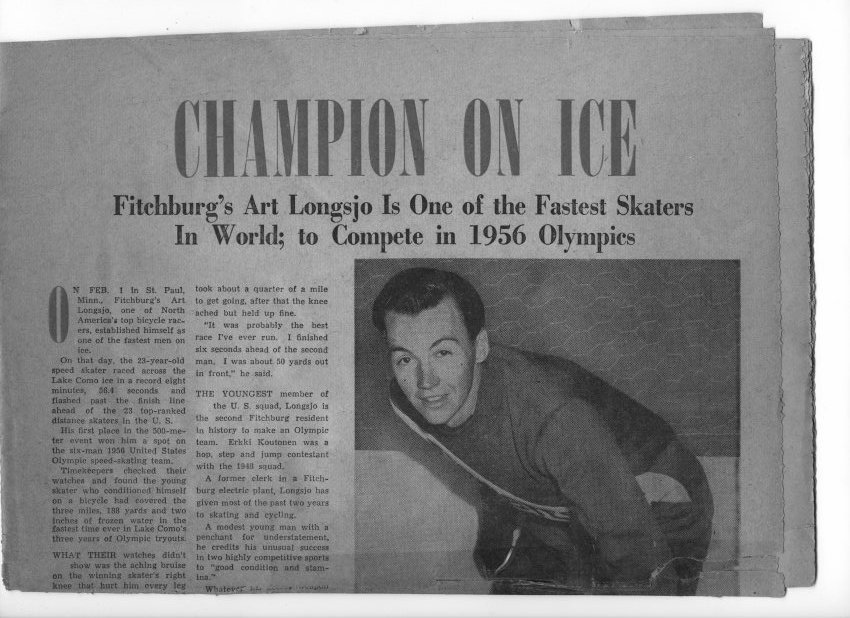 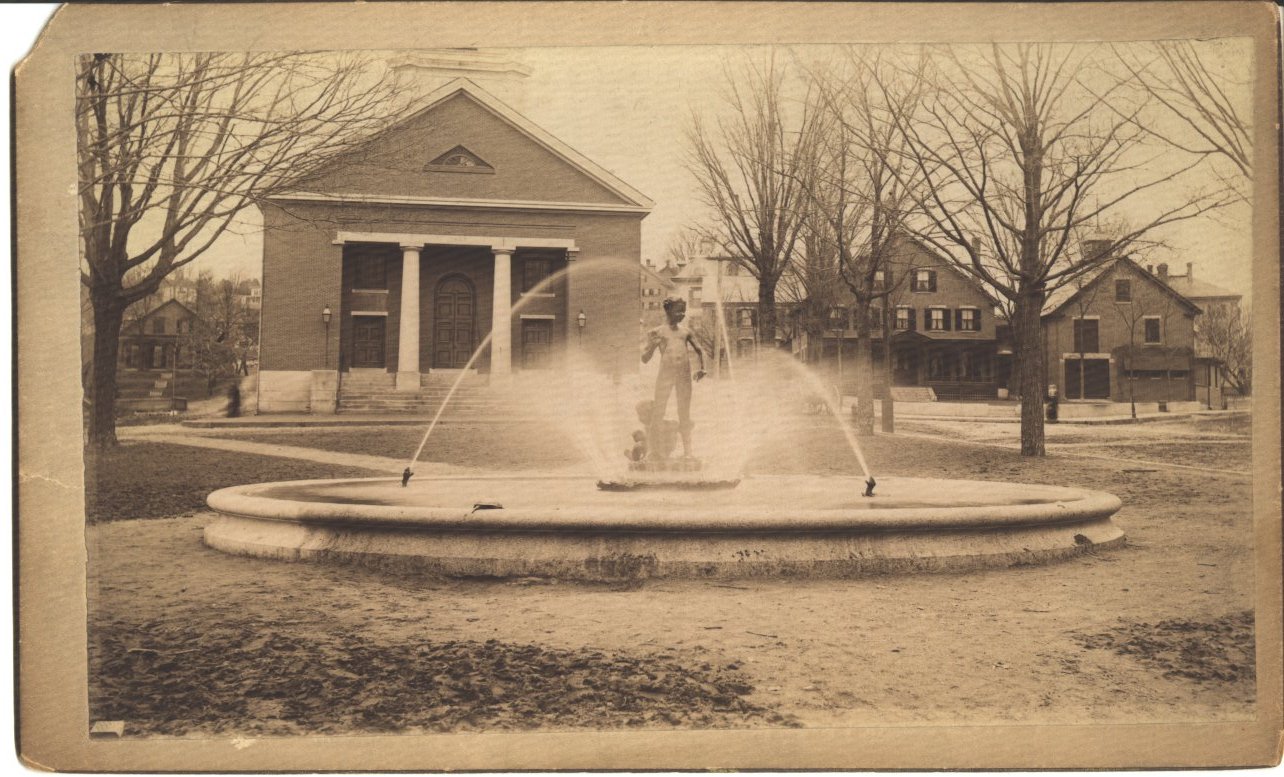 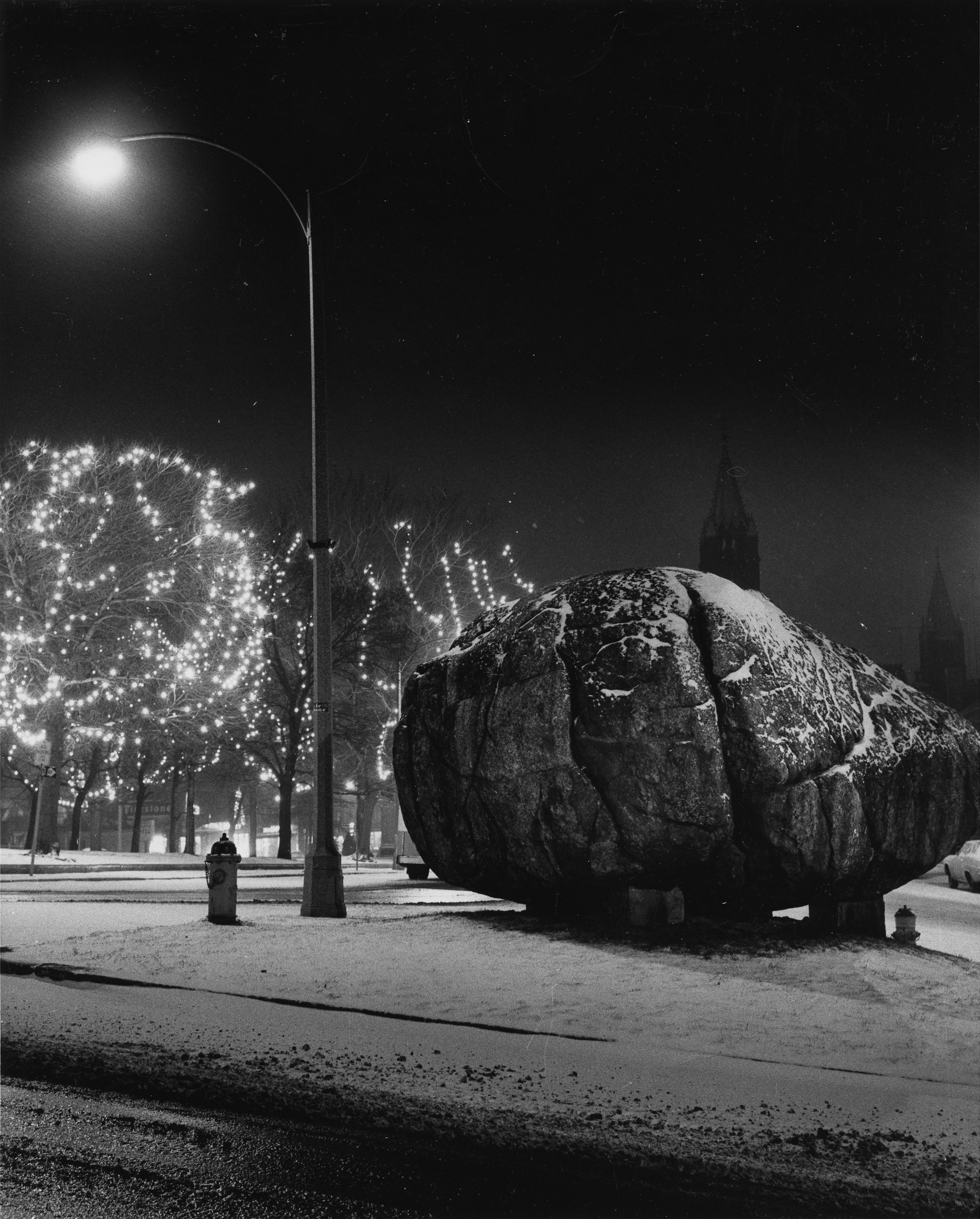 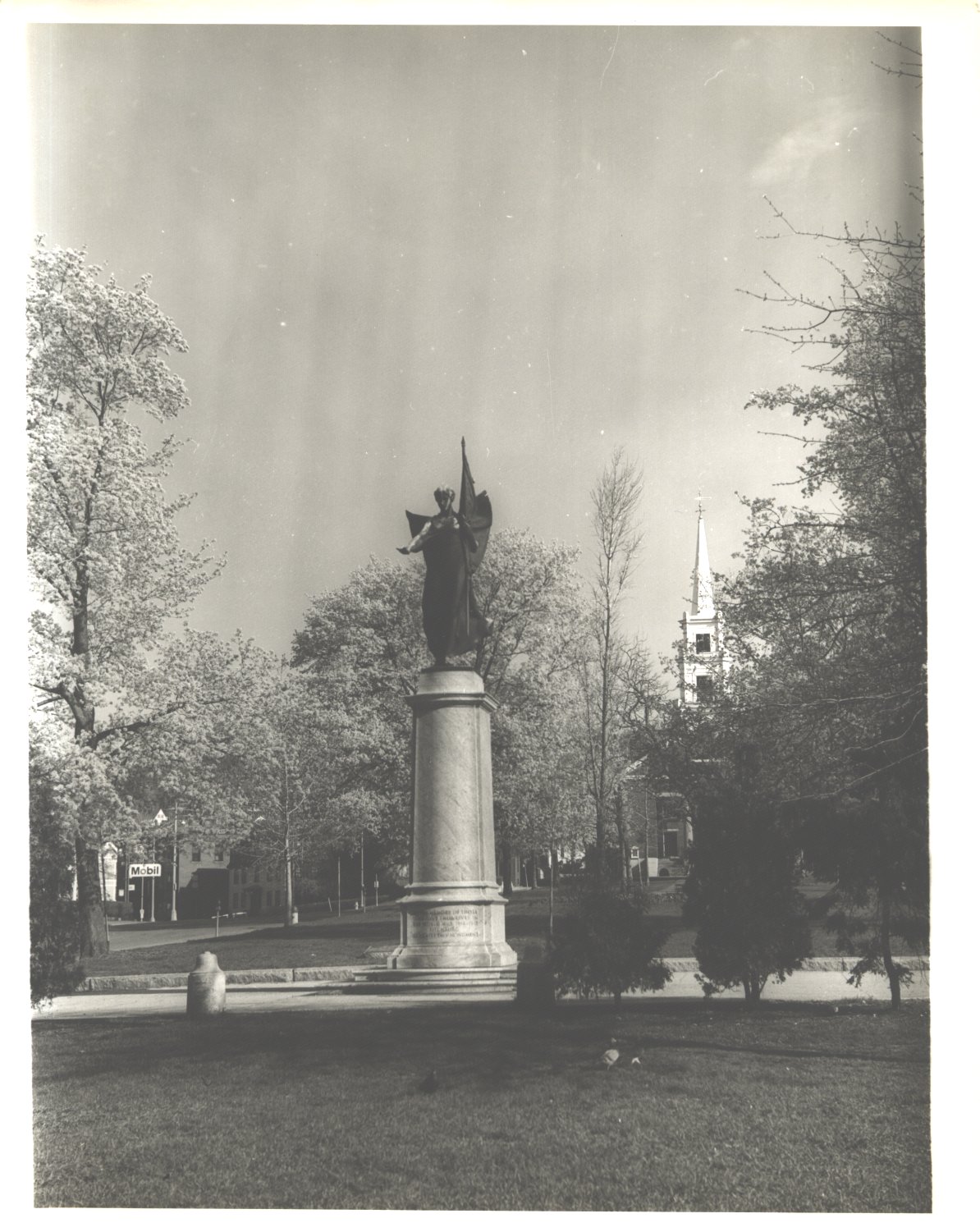 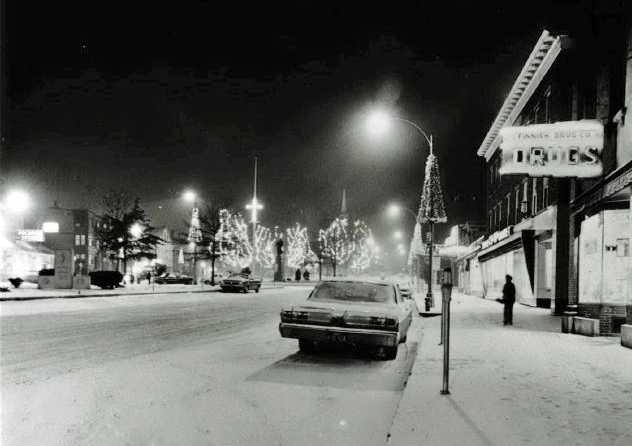 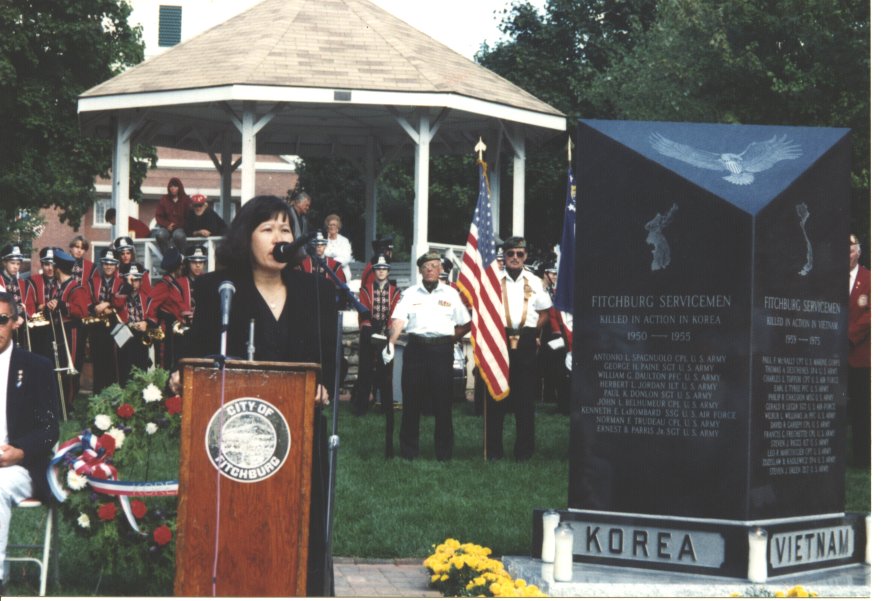 1936 article in the Fitchburg Sentinel about "The Rock" painting, for 1st time

The Firefighters' Monument, erected 1952, was created by Littlehale and Fisher, Fitchburg builders for over a century. This monument was renovated in 2019, adding two tablets with names and an example of a Gamewell brand firebox from the early 20th century, of a kind used in Fitchburg at the time.

The Boy and Turtles Fountain was the first major public commission by Fitchburg native sculptor Herbert Adams. The figures were modeled in Paris, where Adams was living and studying art, and cast in Brussels. The fountain was a gift to the city from Rodney Wallace, Henry A. Willis, and James Phillips, Jr., three important city leaders and philanthropists.

In 1986, the Upper Common was renovated and the landscaping changed to recreate the original appearance of the fountain in the 1890's. A pageant written by Marjorie Lucier was presented as part of the rededication on September 21, and Massachusetts First Lady Kitty Dukakis also spoke. Here's a google view of the fountain, with a glimpse of the Firefighter monument: https://bit.ly/2WFfP2F

This bandstand was dedicated on August 25, 1975. Fitchburg’s common, and other squares on Main Street, have played host to many different bandstands. Popular bands play weekly concerts on this stand on Wednesday nights during the summer, in a series sponsored by the city of Fitchburg. Local seniors remember helping to create and bury a time capsule very close to the earlier gazebo when they were children. A Google view of the bandstand can be found here: https://bit.ly/35R7ux3

Rollstone Boulder, was moved to this location in Litchfield Park in 1931.

This glacial erratic was originally located above the city, on the ridge of Rollstone Hill (to the south). A glacial erratic is a large rock that was carried by glaciers during one of the ice ages to a new location. This one was moved at least 100 miles from its original location by the glacier. During the 1800’s, it was a popular tourist site, where many groups came for picnics and/or photographs. When its location was going to be quarried by local granite companies, it was blown apart and the pieces relocated to small Litchfield Park, where it was reconstructed to remain a symbol of Fitchburg and the city’s strength. The Fitchburg High School yearbook is dubbed “The Boulder” in its honor. You can see it here: https://bit.ly/2L8GxLJ

If you stand on the common and look toward Rollstone Hill to the south, you will see “The Rock”, a bare outcropping that is visible from many neighborhoods in Fitchburg. Each year since 1936, the rock’s surface is repainted by the graduating class of Fitchburg High School. It began as a prank by a group of school band members, who were hoping to intimidate the Leominster fans when the two football rivals played their annual Thanksgiving game in nearby Crocker Field. The annual turkey day contest is one of the oldest football rivalries in the United States. A self-guided historical hike was created in 2018 that leads from the Rollstone Boulder in Litchfield Park, past “The Rock,” and ending at the original location of the Rollstone quarries and the Rollstone Boulder. A small glimpse of the rock, and the beginning of the new Rock Walk, can be seen in this link, which also shows the historic 1830's townhouses: https://bit.ly/2WaZp2I

Herbert Adams was born in West Concord, Vermont, but spent most of his youth in Fitchburg. After studying at the Massachusetts Normal School of Art in Boston (now known as MassArt) and the Massachusetts Institute of Technology, he worked in Paris between 1885 and 1890, taught briefly at the Pratt Institute in Brooklyn, and then established his studio in Cornish, New Hampshire. He is very widely known and respected: his statue of William Cullen Bryant in New York City’s Bryant Park is particularly famous.

This World War I Monument was dedicated on November 12th, 1928, 10 years and one day after the Armistice that ended the war. A military parade was held General Pershing attended and placed a wreath at the statue. Governor Alvan T. Fuller, Senator David I. Walsh and Mayor Joseph A. Lowe all made speeches. President Calvin Coolidge had been attended but was unable to attend; he ended up coming to see the statue without any fanfare or advance notice. His quiet visit was commemorated with a plaque and fits his reputation: he was known as “Silent Cal”.

This Victory statue holds a furled-up flag in one arm and holds the other outstretched in a gesture to bestow honor upon the fallen. In addition to this statue raised in their honor, each Fitchburg soldier who died in World War I was honored with a plaque placed in front of his home. For the centennial of the war in 2018, the city began moving these plaques to a central location on the Upper Common. Visible, with the Longsjo Memorial, in this google photo: https://bit.ly/2WzKlee

Memorial to the Korean and Vietnam Wars

This memorial to the soldiers who fought in the Korean Conflict and the Vietnam war was dedicated on September 11, 1993. Andre Bergeron and Vietnam Veterans of America Chapter 116 (“Firebase”) spearheaded the movement to create this monument. Bergeron was a Marine veteran of Korea and Vietnam. The monolith was designed by John Marshall and cut by Hathaway Monuments of Leominster from the same Black granite used to build the Vietnam Memorial in Washington, D.C. A portion of the monument can be seen in the photos attached to this walk. There is another Vietnam veterans monument in Fitchburg: a flagpole next to Forest Hill Cemetery, at the intersection of Mount Elam Road and Electric Avenue. It was raised in 1983 by the Vietnam Era Veterans Outreach Center.

The Arthurs S. Longsjo, Jr. memorial honors the Fitchburg-born athlete who was the first American to compete in the Winter and Summer Olympics in the same year. He participated in the Winter Olympics in Cortina, Italy as a speed skater and the Summer Olympics in Melbourne, Australia as a bicycle racer, both in 1956. He was a national champion in speedskating and an award-winning bicycle racer and is honored in the Bicycling and Speedskating Halls of Fame. He was killed in an auto accident just a few days shy of his 26th birthday, on September 16, 1958. From 1960 to 2019, he was honored with a memorial bike road race in Fitchburg. In 2019, it was the second oldest bike race in America.