On the evening of April 20, 1970, the Kansas Memorial Union burned. The building sustained severe damage, despite the efforts of firefighters and students to contain the flames. Officials determined that the fire was set intentionally and was caused by an explosion on the sixth floor (7).The fire took place during a turbulent spring for Lawrence, Kansas. Many in the United States were angry about the military draft and the Vietnam War, and racial tension also contributed to the country’s disquiet. These factors resulted in instances of civil unrest and protests at the University of Kansas and other educational institutions, which were focus points for activists as well as more extreme groups (7).

Damage sustained by the Union's ballroom during the fire. 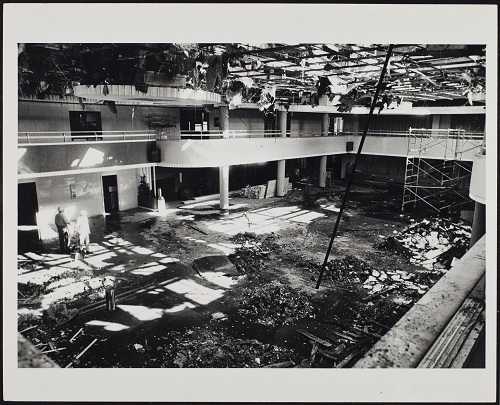 The Campanile stands in the foreground of the photograph while smoke and flames rise from the Union in the background.

Students line a staircase in the Union while assisting fire crews 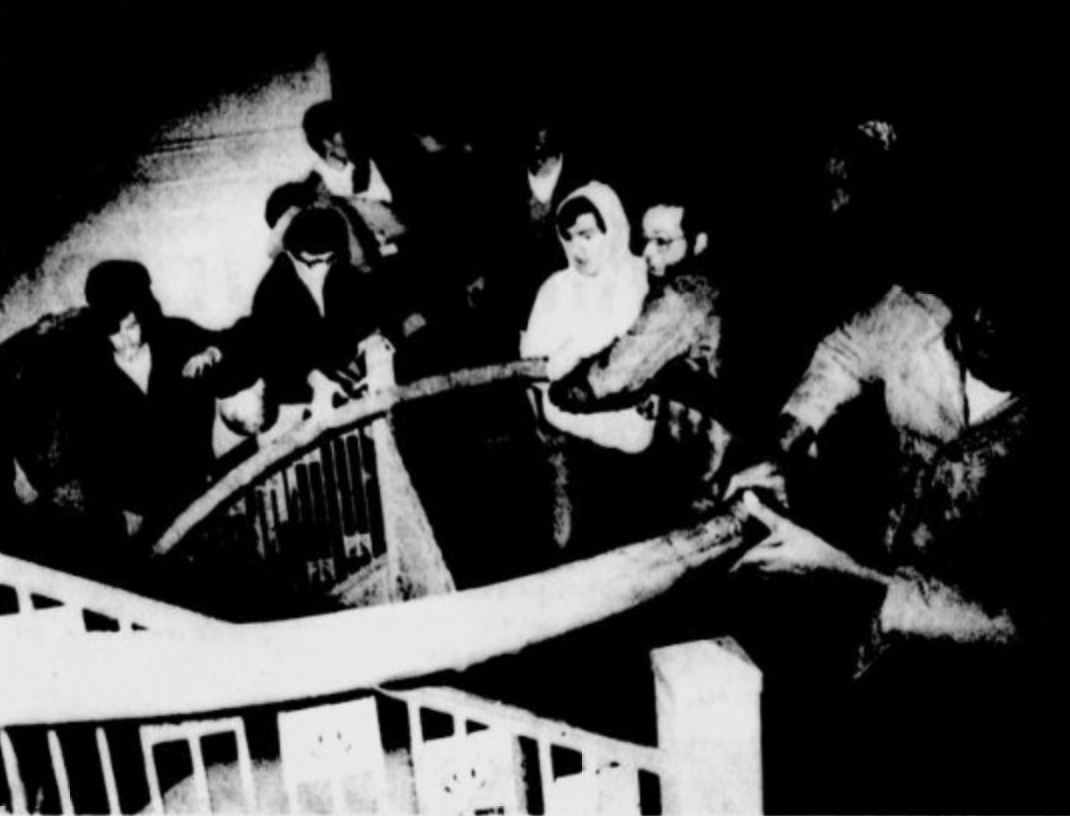 An image of the exterior of the Union after the fire. The roof cave-in is visible in the top left. 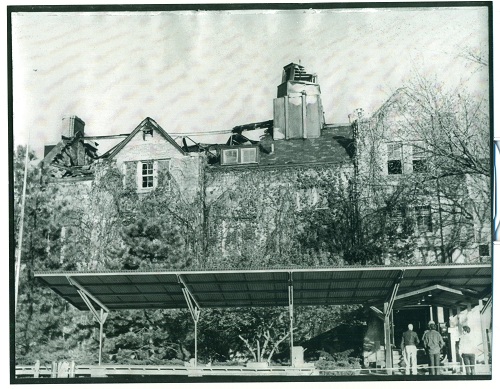 Protestors demonstrating at the University of Kansas during National Vietnam Moratorium Day. 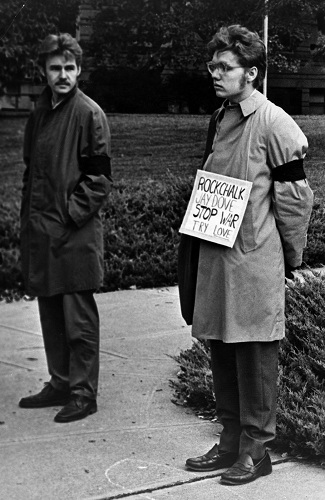 For decades, the Kansas Memorial Union has served as a place for campus organizations, students, and faculty to gather and share ideas. The Union was established as a memorial to honor the KU students and alumni who lost their lives during World War I (3). Construction of the building began in the 1920s and was finished in the 1930s, although several building additions and renovations have been completed (2). During the Vietnam War, the University of Kansas experienced anti-war protests and conflicts over racial inequality. This tense campus environment eventually affected the Union.

Some anti-war protests at KU during 1969 and 1970 were peaceful, with faculty and members of the Lawrence community demonstrating alongside students (4). Other protests were more destructive. In the spring of 1969, protesters broke into Memorial Stadium and occupied the field during Chancellor Wescoe’s ROTC review, forcing the cancellation of the event (4). Amid these anti-war protests at KU, the Black Student Union (BSU) also used activism to express their views on racial inequality. In February of 1970, members of the group dumped six thousand copies of the campus newspaper, the University Daily Kansan, into Potter Lake to protest the discontinuation of BSU’s publication, Harambee (4). Days later, BSU also drafted a list of demands for changes in the university, which included more African American faculty, greater numbers of African American students, and the creation of a new department dedicated to African studies (1). These events on KU’s campus provide local context for the wider struggles that were taking place across the United States at the time and explain some of the reasons for campus tensions. In this atmosphere of political activism and discontent, William Towns explains that Lawrence experienced “racial confrontations, student protests, bomb threats, arson, and incidents of sniper fire directed at firefighters” during a period of unrest in April of 1970 (7).

On the night of April 20, a suspected firebomb ignited a blaze that tore through the top levels of the Union and caused a portion of the roof to collapse (5). Fire crews and students spent hours fighting to control the fire. In the aftermath of the blaze, newspapers like the Lawrence Journal-World praised the actions of the students who risked their safety to assist the fire crews. Students carried hoses and tools up the stairs to firefighters. Some ventured as high as the roof, which was more dangerous than other parts of the building because the students would have to make their way back down through the upper levels, where the fire had started (6). Other students worked to move furniture and artwork out of the fire’s path. However, some of the art could not be moved, so students used blankets to protect the works as much as possible (6). When the situation became too dangerous, the firefighters ordered the students out of the building (6). The fire was contained by the early hours of April 21 (7).

After the flames were extinguished, the public gained a more comprehensive view of the fire and its consequences. Except for a small number of firemen who suffered from smoke inhalation, there were no injuries reported as a result of the fire (5). University of Kansas officials announced that the blaze had ruined about 40,000 square feet of space in the upper floors while water damage affected the lower floors (5). Some estimates placed the losses as high as one million dollars (5). Officials discovered “accelerant and matchbooks strung together” close to the Pine Room and determined arson to be the cause of the fire (3). The firebombing and civil unrest in the city prompted local officials to ask Governor Robert Docking to impose a curfew on Lawrence that would last four days (7). As a consequence of the unrest during this time, a rumor center was established so that students, their families, and others in the community could have access to accurate information about the situation in Lawrence (9). This rumor center eventually became KU Info, a resource that provides information services for the University of Kansas (9).

In the days following the event, students and faculty developed various theories surrounding the identity of the arsonist or group of arsonists. Chancellor Laurence Chalmers believed that individuals within Lawrence set the fire in order “to take advantage of the tension for their own purposes” (8). The president of the student body, David Awbrey, believed that entities from outside of the community sought to inflame the unrest in Lawrence by planting the firebomb (8). Some were concerned about the possibility of other threats. In the coming nights, students and faculty members volunteered to watch over campus buildings as a preventative measure (8).

Several other events occurred within hours of the Union fire. African American students had seen their demands for curriculum changes and more equal representation in school activities tabled at a USD 497 board meeting (7). Following the meeting, emergency crews responded to reports of vandalism at Lawrence High School, finding fire damage and broken windows (7). The fire chief, F.C. Sanders, said that firemen had been shot at while responding to the call at the high school (5). Windows were shot out of several local businesses as well as the Santa Fe Depot (5). The timing of these events led some to believe that they might be connected to the fire in the Union. Some blamed minority groups for the Union fire, but there is a lack of conclusive evidence as to who started the blaze (7).

Towns notes that “there was no shortage of possible suspects in that social climate of anti-war activism, racial confrontation, and anarchy” (7). The exact reason for the firebomb remains unknown (7). Towns suggests that university leadership may have purposely decided not to pursue charges in hopes of containing the unrest (3). No one was ever arrested for the burning of the Union, and the statute of limitations for the crime has expired (3).

Firefighting and Law Enforcement
History of Public and Higher Education