Glass has been a big industry in Newark and Licking County for almost a hundred and fifty years, largely due to the amount and quality of silica that naturally occurs in the area. From bottles to decorative glass to commercial products, the glass industry has been booming and transforming in Newark over the decades. 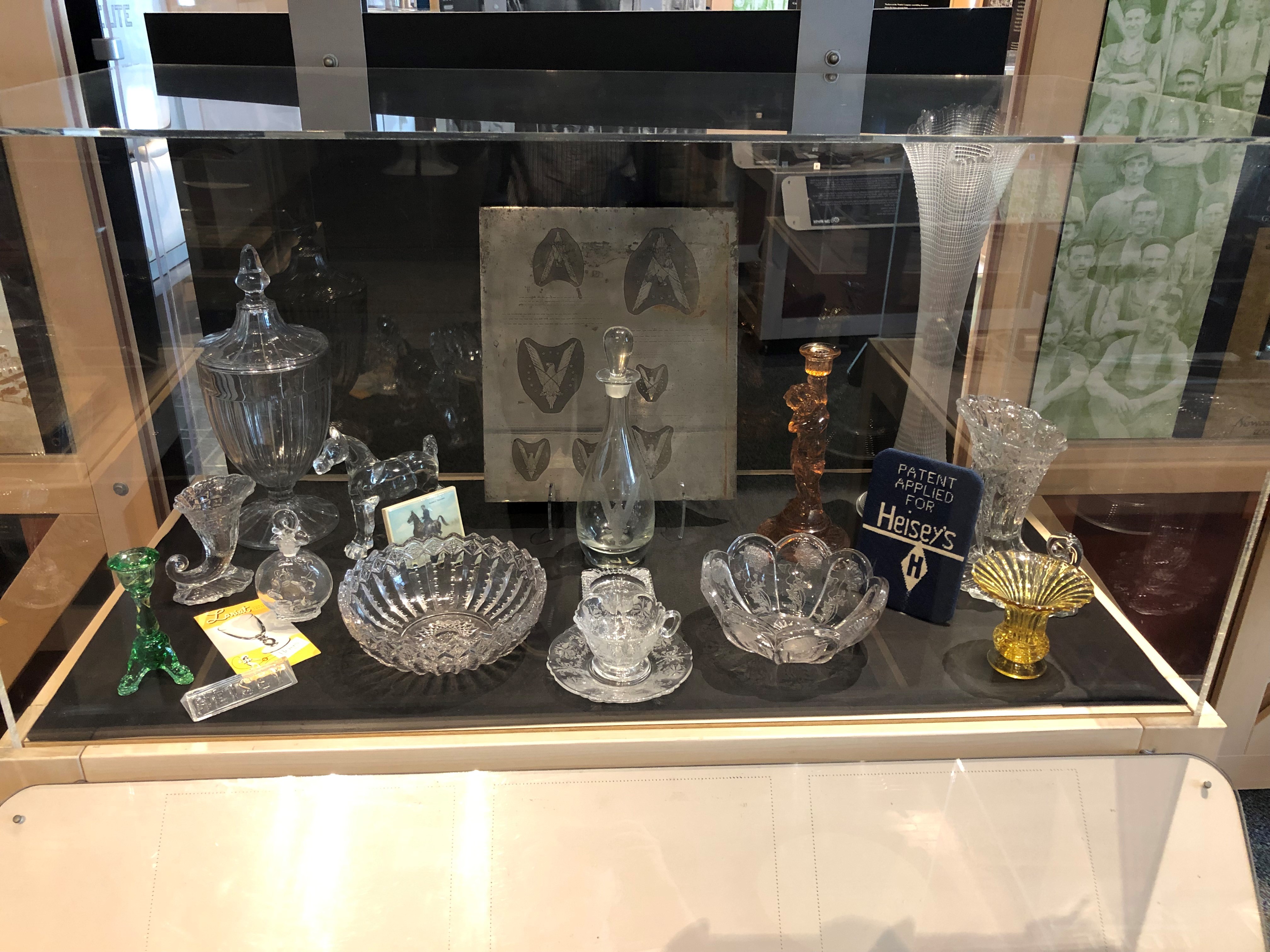 Shown in the case are a variety of Holophane refractors, a mold used to manufacture globes, and a lens for a Ford Model T head lamp made in 1924. 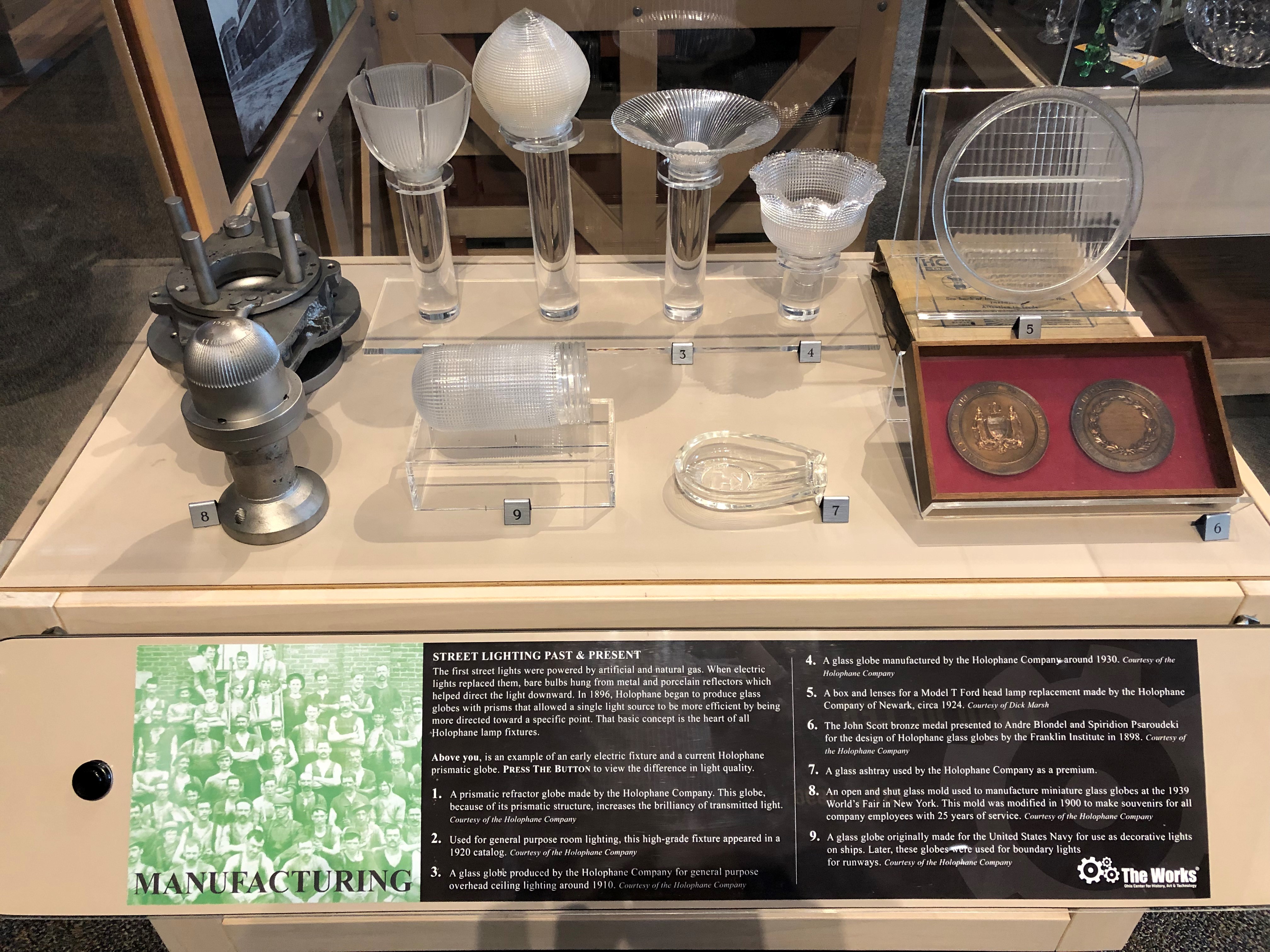 The Heisey Glass Factory. The buildings still remain, although the tall smokestacks have been removed. 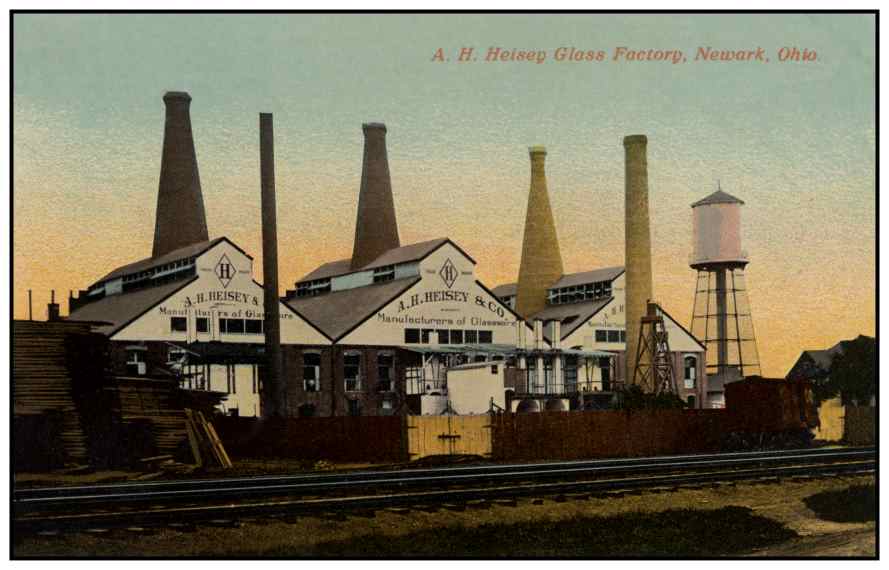 In 1895, Augustus H. Heisey opened discussions with the City of Newark about locating a glass plant in the city. A land company was formed and lots were sold to raise the funds to subsidize the construction of the plant. Mr. Heisey showed his entrepreneurial spirit by starting his own gas company to supply natural gas to the plant and the homes in the area.

A.H. Heisey and his employees influenced the American public, in particular the Ohio and Newark area in relation to industrial production, advertising and marketing of glassware, and the development of other commercial ventures that provided the foundational development of the region.

The Heisey Company closed its doors for Christmas vacation in 1957 and never re-opened. The Imperial Glass Corporation of Bellaire, Ohio, bought the existing molds from Heisey in 1958.

The Heisey Collectors of America, Inc. opened the National Heisey Glass Museum in September 1974. This museum is an important and unique treasure. The museum serves as an educational institution portraying the craftsmanship of the Heisey employees, the quality and beauty of the hand-wrought glass produced in the one and only Heisey factory located in Newark, Ohio.

The history of the Holophane Company begins in the 1800's in France. In 1896, Andre Blondel and Spiridian Psaroudeki patented a unique lamp globe with a prismatic structure that increased the brilliancy of transmitted light. Otis Mysett purchased the patent rights and wanted to manufacture the globes in the United States. Lacking sufficient capital, Mysett entered into an agreement with Augustus Heisey to locate in Newark, Ohio, and produce the glass globes at the Heisey plant, then under construction. Holophane manufactured its globes at the Heisey plant from 1900 to 1910, when it built its own plant across the street.

Initially, the company produced prismatic refractors for interior and exterior gaslights. During World War II, the company concentrated on electric lights. Both the Army and the Navy used Holophane globes for lighting military bases and airfields all over the world.

The company also made headlight lenses for automobiles and developed a blackout lighting unit that did not emit any horizontal light. In 1948, the firm introduced its first overhead electric streetlights.

In succeeding years, Holophane opened additional plants in Springfield, Utica, Columbus, Pataskala, Texas, and in Mexico. This innovative company, a pioneer in scientific lighting design, continues to be a leader in its field.