The Margaret and George Riley Jones house was constructed from 1901 to 1903 in Colonial Revival style. The wood frame, 2-1/2 story structure is sheathed in red brick and is topped by a gable roof with dormers. The front porch with its grand columns is topped by a balcony spanning all five bays, with the second story windows detailed in stained glass. The historic home was added to the National Register in 1984. The social club for professional women that operated from the home and rehabilitated the structure beginning in the 1980s closed in 2003. The building now contains law offices of The Cross Law Firm after being purchased by P. Gregory Cross. 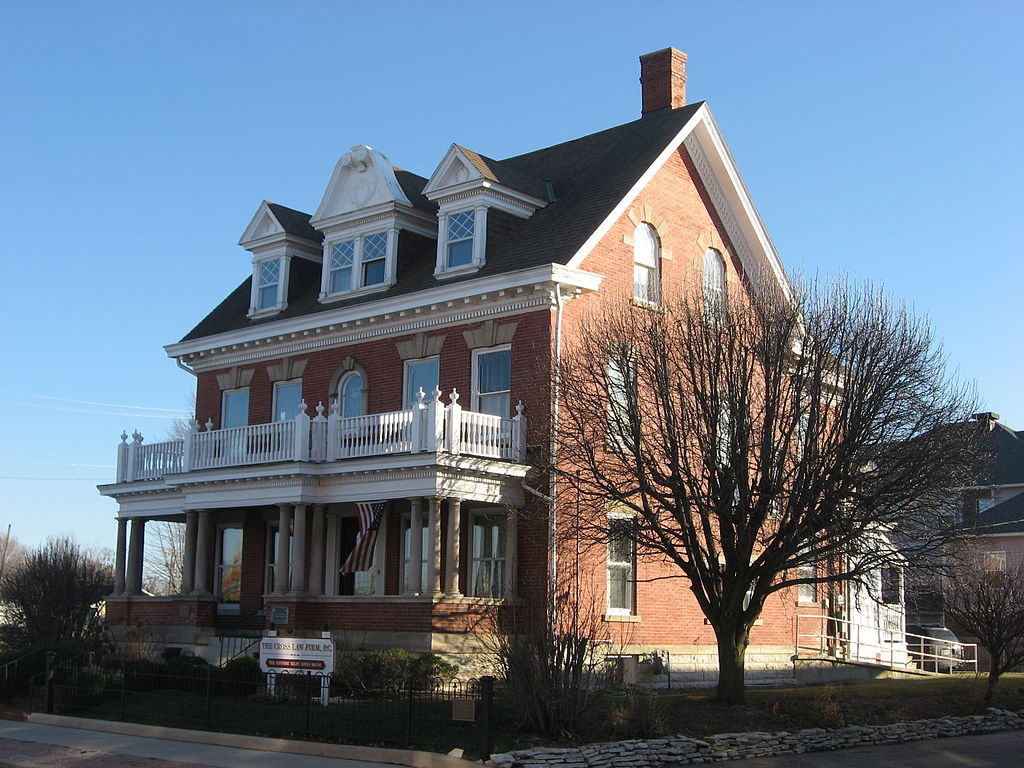 George Riley Jones was a successful grocer and real estate dealer who was born in Muncie in 1858. He worked for a number of grocers and other businessmen before opening his own grocery store at Howard and Liberty Streets. He is said to have owned more land in town than most others of his era. Jones was active in the local Elks Lodge.

The mansion was built from 1901 to 1903 on part of Fanny Turner's Subdivision. A British architect living in Fort Wayne, Alfred Grindle, was the house's designer. Limestone columns with Doric capitals rising from a brick wall base greet the visitor along the first floor porch. Highlights of the interior details are an oak staircase in the foyer, a stained glass window on the first level of the stairway, and neo-classical wood trim.

The house was meant to be a home for the only daughter of George Riley Jones and his wife, Margaret (McConnell, born in 1863, married in 1888), Christine. George died in 1925 and Margaret passed away in 1931. Their daughter, Christine, lived only four years after her mother died. The home was then used as a boarding house and as offices for a naturopathic practitioner. George and Bessie Geisler bought the house and lived there until 1980.

The Riley-Jones Club was founded as a corporation and raised money to fund the purchase and rehabilitation of the massive house in the early 1980s. The house functioned as a social club for female professionals. The house was originally roofed in slate. The failing roof with dozens of holes was replaced with asphalt shingle roofing by the new owners in the early 1980s, new gutters and copper flashing were installed. The flat roofs of the front and rear porches were re-tarred. The rehabilitation of the aging home spurred on others in the nearby inner city neighborhood to make improvements as well. After the Riley-Jones Club for Women closed, P. Gregory Cross bought the building in 2003 and founded The Cross Law Firm. He has continued to rehabilitate the building which still serves as his firm's law offices.