This aircraft has a distinguished history, with Air Force squadrons in the 23rd and 36th Tactical Fighter Wings and the Virginia Air National Guard. It also appears this aircraft survived the Ho Chi Minh Trail flying from Korat Royal Thailand Air Force Base in Southeast Asia. In 1951, Republic Aviation began a project to develop a supersonic tactical fighter-bomber to replace the F-84. The result was the F-105 Thunderchief, later affectionately nicknamed the “Thud.” The prototype YF-105A first flew on October 22, 1955, but the first F-105D did not fly until June 9, 1959. F-105s were produced in the single-seat B and D models, and also in two-seat F and G models. Some of the 143 F-models were modified to become electronic warfare aircraft with radar jamming and homing equipment and the missile to shoot back at SAM missile radar sites. A version with more advanced electronics became the F-105G. These latter 105s became known as “Wild Weasels” after the animal that would chase a predator into its own den. A total of 833 Thunderchiefs of all types were built, including 610 F-105Ds. The F-105 could carry over 12,000 pounds of ordnance, a heavier bomb load than a World War II B-17. Interestingly, the B-17 was only 10 feet shorter than the F-105. The F-105 could carry up to 8,000 pounds or ordnance internally in the bomb bay. The F-105s were used extensively in the Vietnam War. They cumulatively flew over 20,000 missions against North Vietnam with half the aircraft being lost. The last F-105D was withdrawn from USAF service on July 12, 1980. 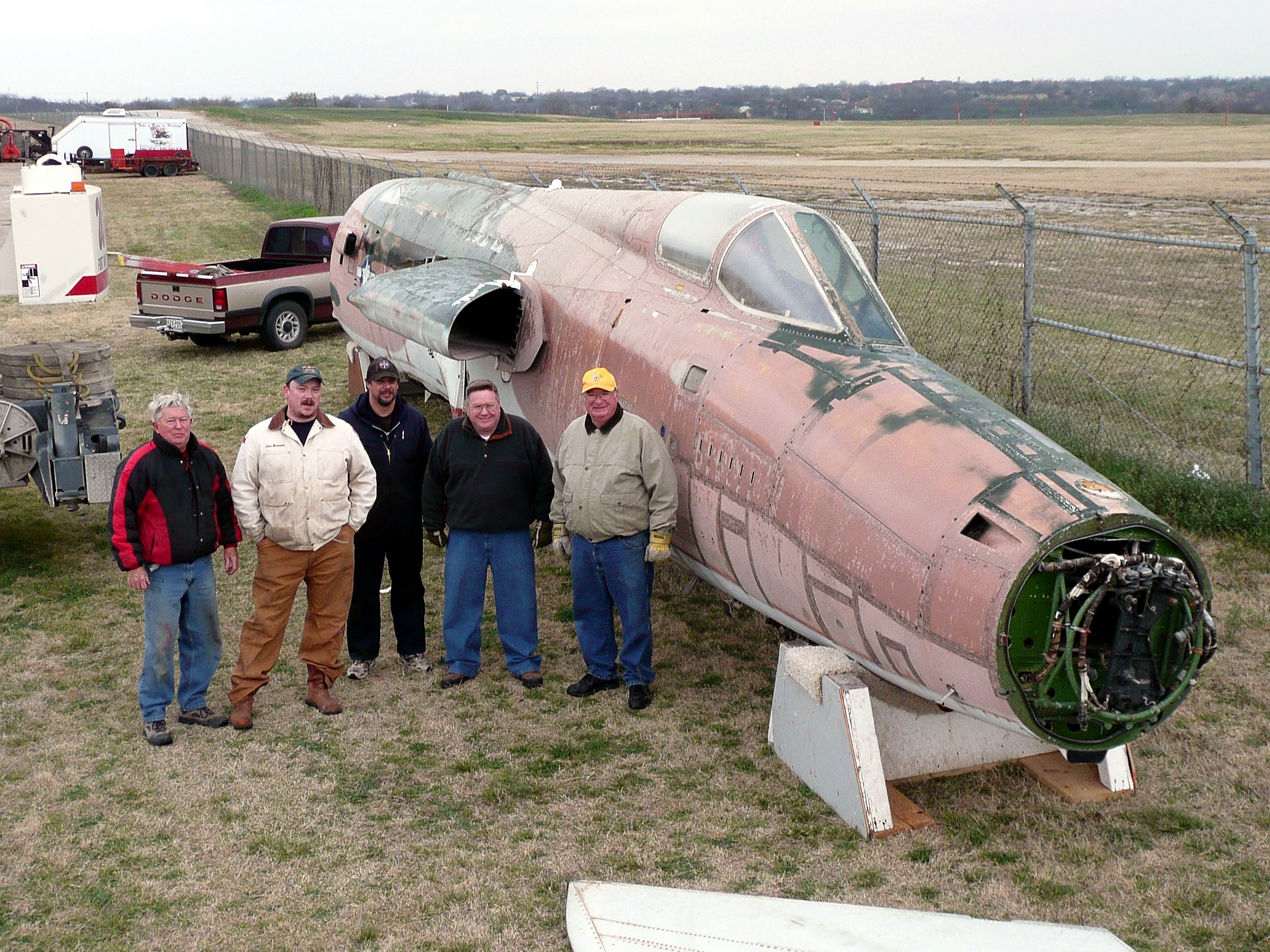 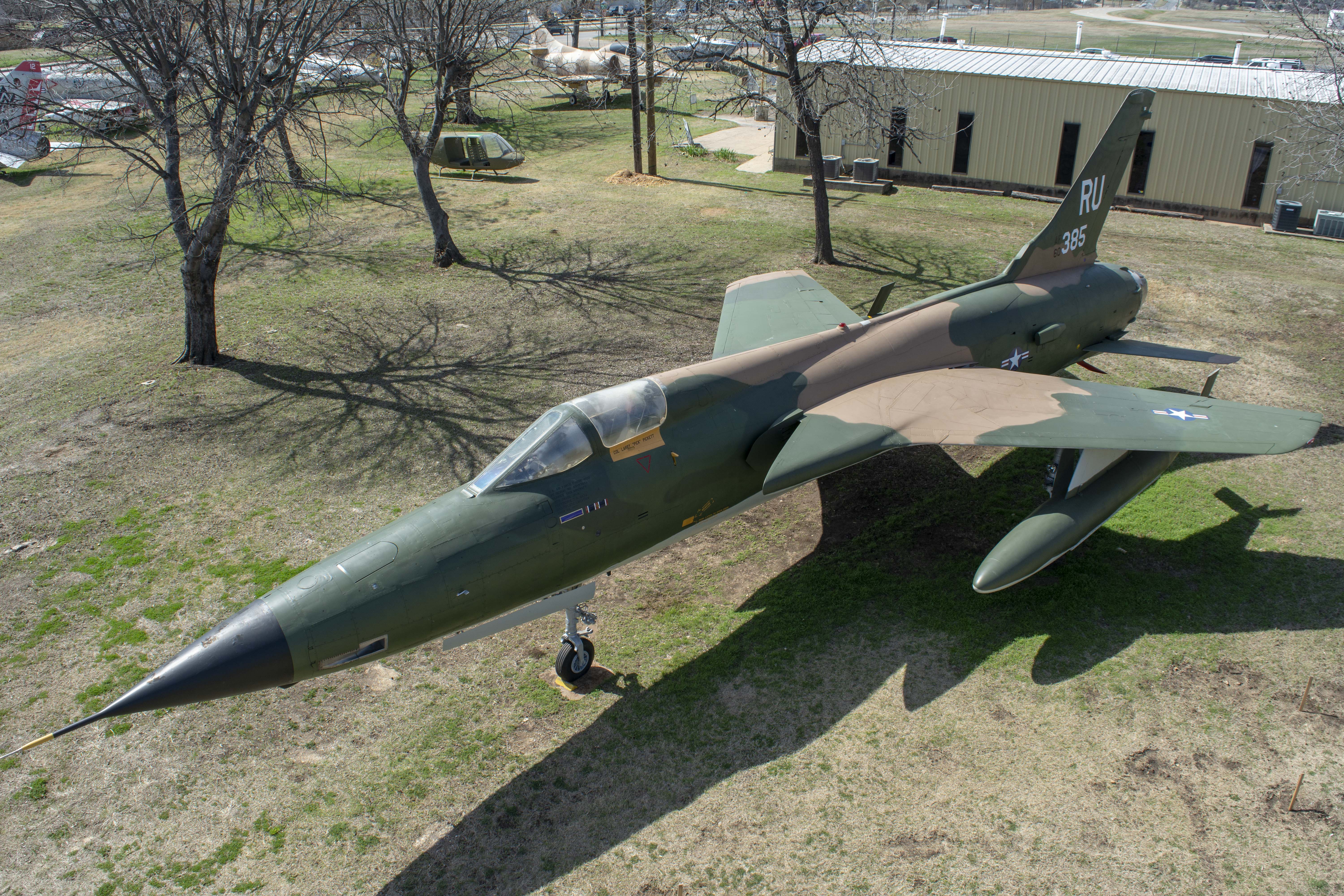 FWAM’s F-105D-10-RE Thunderchief was Air Force serial number 60-5385, c/n D235, and was manufactured at Farmingdale, New York, by Republic Aviation. It was accepted by the Air Force on November 1, 1961. Interestingly, all 10 of the aircraft constructed prior to this one were lost in combat or accidents from 1961 until 1977.

The aircraft was sent to the Mobile Air Logistics Area, Brookley Air Force Base, Alabama. In December 1961 the aircraft arrived at its first assignment with the 36th Tactical Fighter Wing, US Air Forces Europe, at Bitburg Air Base, Germany. At the time, the unit was deployed to Wheelus Air Base, Libya. The following describes to activities of the 36th TFW.

The three squadrons of the 36th TFW (22nd, 23rd, and 53rd Fighter Squadrons) began receiving their F-105D Thunderchief fighter-bombers in mid-May 1961. Formal US Air Force Europe acceptance of the Mach 2 fighter-bombers was held at the Paris Air Show on June 3, 1961. Deliveries of the F-105D model were completed in 1963, and the 36th carried on its Cold War mission of tactical nuclear weapons delivery. The F-105s were specifically designed for the nuclear strike role, with the primary armament being a “special store” (a euphemism for a nuclear weapon) housed in the Thud’s bomb bay. This weapon was usually a Mark 28 or a Mark 43 nuclear weapon. However, a Mark 61 store could be carried underneath the left or right inboard underwing pylon and a Mark 57 or a Mark 61 store could be carried underneath the centerline pylon. However, as a nuclear conflict became less and less likely in the European theater, the nuclear weapon carried in the bomb bay was usually replaced by a 390-gallon internal fuel tank, the offensive load being carried on four underwing pylons and/or on a pylon mounted underneath the fuselage on the centerline (attached to the bomb bay doors).

The Wing’s operation of the Thunderchief dwindled in 1966 as new F-4D Phantoms in European camoflage were delivered from St. Louis to carry on the nuclear delivery mission. By December 1966, all the 36th TFW Thuds had been ferried Stateside for combat crew training duties at McConnell AFB, Kansas, or on to the war in Vietnam after stateside refurbishment.

In May 1966, FWAM's Thunderchief was assigned to the 49th Tactical Fighter Wing, Spangdahlem Air Base, Germany, which was also deployed to Wheelus Air Base in Libya.In February 1967, the aircraft was transferred to the 23rd Tactical Fighter Wing, Tactical Air Command, at McConnell Air Force Base, Kansas, which was deployed to George Air Force Base, California. It remained at George until early 1971.

On February 26, 1971, the F-105, was transferred to the 192nd Tactical Fighter Wing (Virginia Air National Guard) at Byrd Field, Virginia, who operated the aircraft for ten years. It was assigned to the 23rd and 36th Tactical Fighter Wings of the Virginia Air National Guard. Specifically, this aircraft was assigned to the 149th Fighter Squadron from October 1974 until October 1980 and was nicknamed ‘Fireball Express.”

The aircraft arrived at AMARC on May 29, 1981, and was assigned number “FK0042” for storage and eventual disposal. In February 1983, the aircraft was dropped from the Air Force inventory and declared surplus. The aircraft sat in the Arizona desert for almost two decades. By 2004, the F-105 was at the Texas Air and Space Museum in Amarillo, Texas, where it remained until the museum closed in 2007. The aircraft was then relocated to Fort Worth.