In 1944, a handful of Major League Baseball teams were conducting spring training in Indiana due to travel restrictions stemming from WWII. The Cincinnati Reds and the Chicago Cubs were supposed to be a part of a commemorative game at Indiana University Bloomington to raise money for the Hayes Memorial fund. The day of this game was a part of “Hayes Day” and was for the beloved track coach, E.C. “Billy” Hayes who had died months earlier. The game was ultimately cancelled due to cold weather.

Newspaper article from the Indianapolis star in 1944 that gives details about the Reds vs Indians game. 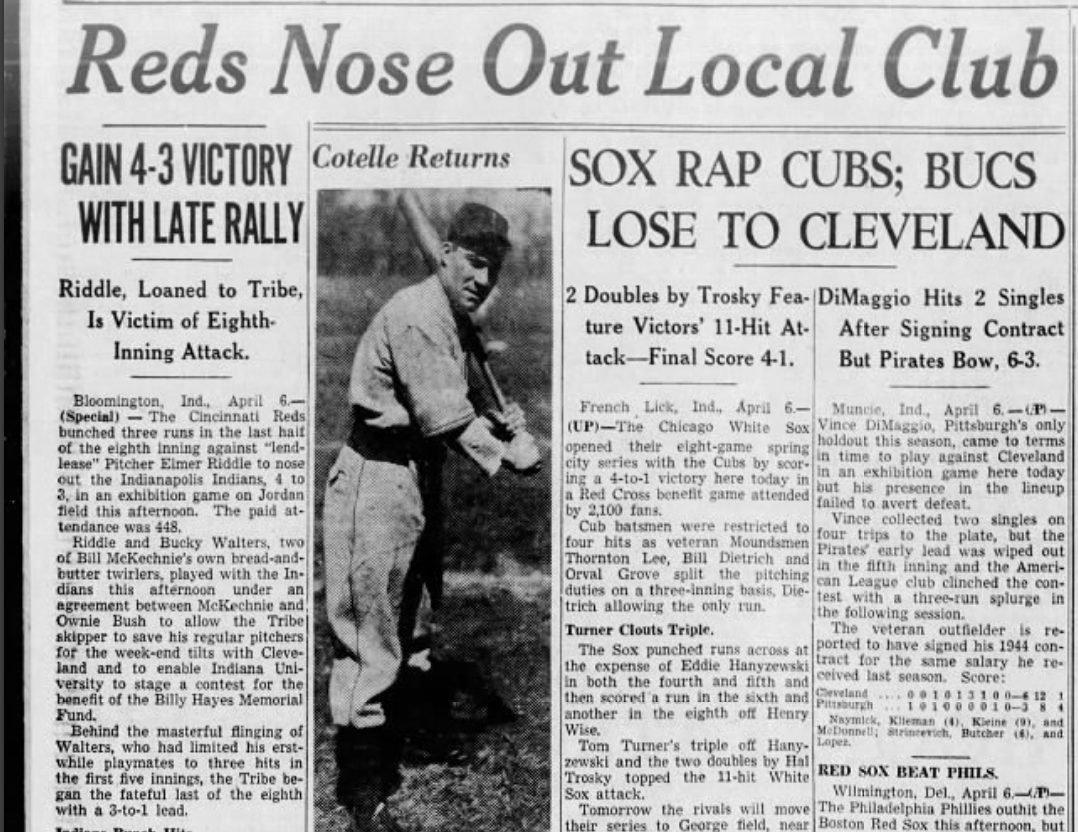 Jordan Field where the Reds vs Indians game took place. 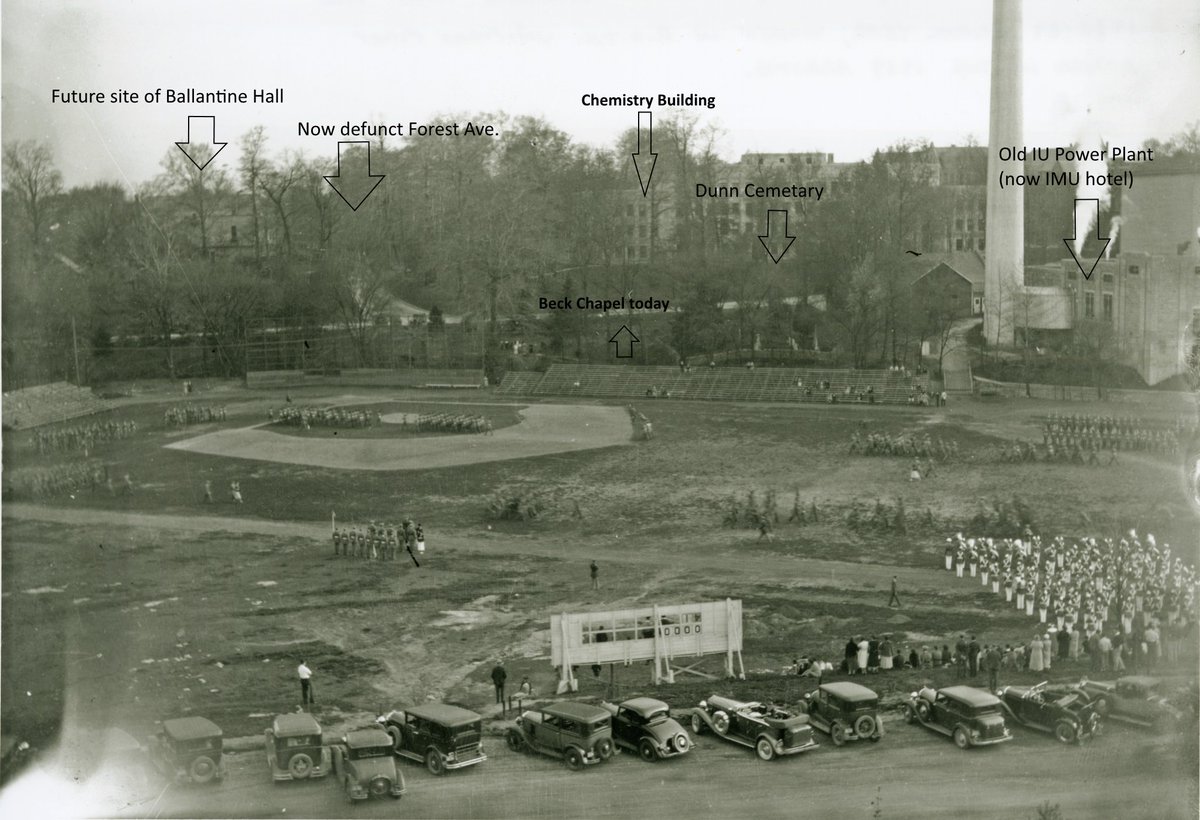 An article from the Indiana Daily Student about the original Hayes Day game that was supposed to happen between the Reds and the Cubs. 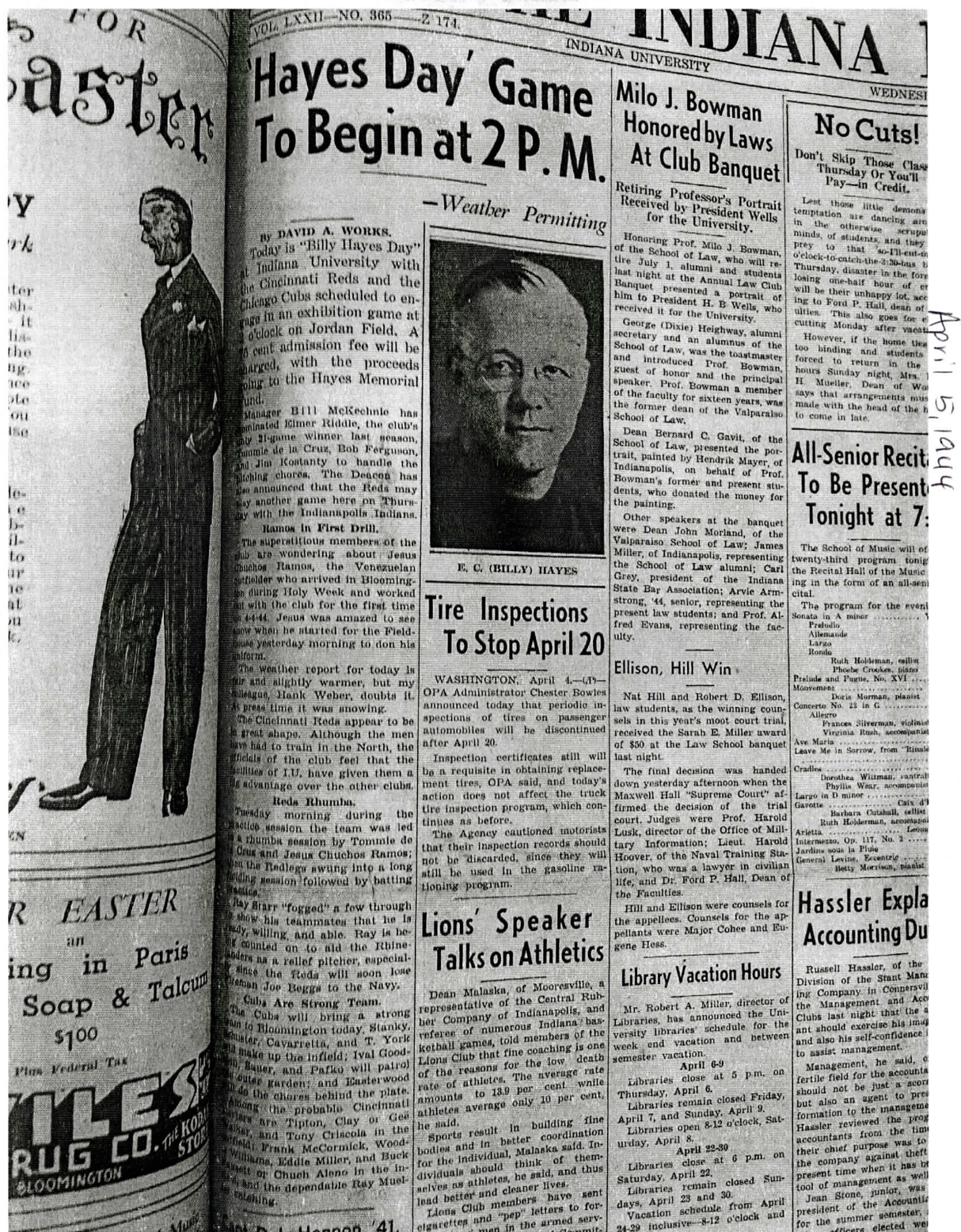 An article from the Indiana Daily Student about Billy Hayes Day. 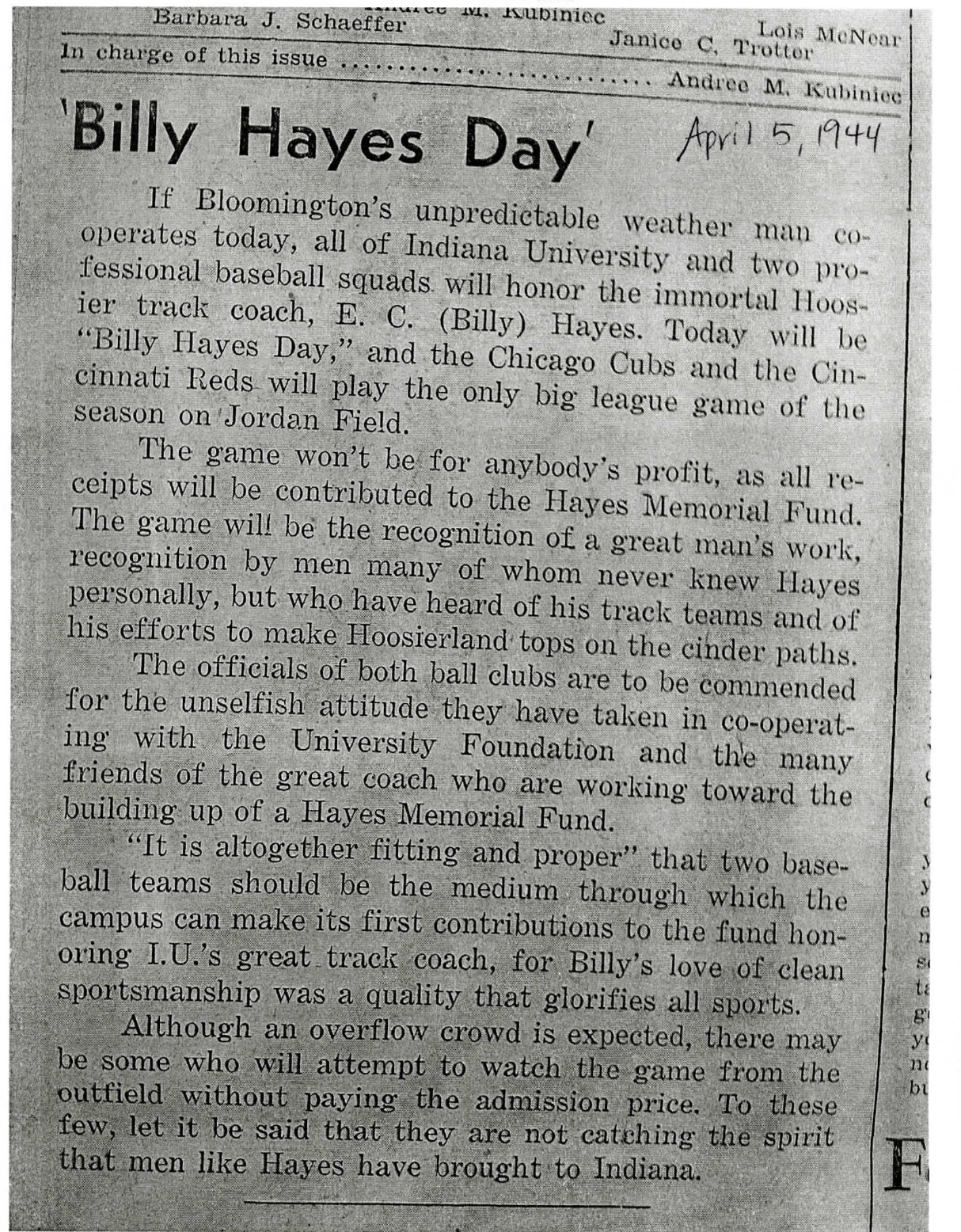 Billy Hayes was such a beloved coach in the sports world that people wanted to do something to make sure his legacy lived on. The Hayes Memorial Fund was suggested by men who were his students in efforts to raise money for low income, athletically gifted individuals to become collegiate athletes. In efforts to raise money for the track coaches’ fund, a game between two MLB teams conducting spring training on campus- The Cincinnati Reds and the Chicago Cubs- was planned. According to a series of Indiana Daily Student (IDS) articles, the matchup between the Reds and the Cubs was set to start at 2:00 PM (EST) and quickly became a highly anticipated game. As the anticipation for the highly awaited game grew stronger, some professors even let their classes out early for students to attend the game. Unfortunately due to unpredictable Indiana weather the game was cancelled.

During their time in spring training in 1944 the Reds had many of their games cancelled due to weather, however, the unpredictable midwestern weather didn’t stop them from honoring the legacy of Billy Hayes. Even though the Cubs and the Reds weren’t able to play that day at Indiana University, the Indianapolis Indians became the next matchup for the Cincinnati Reds. The following day, the Reds played the Indianapolis Indians who were also conducting spring training in Bloomington, Indiana. Hoosiers did not want the Hayes Memorial Fund to miss out on the money to be raised from the game, so they decided to stage a contest to benefit the fund. This game had 448 tickets that were purchased and raised $350 for the Hayes Memorial Fund. The Reds won 4-3.

The initial Hayes Day Reds and Cubs matchup instead played a game on April 8, 1944. The makeup game was played in Louisville, KY.