Erected in 2014 by the Pennsylvania Historical and Museum Commission, this historical marker was commissioned to honor the life of Anna Howard Shaw (February 14, 1847 – July 2, 1919). This marker can be found at the intersection of S Orange St. and S Ridley Creek Rd on S Orange St. Shaw was a leader of the women's suffrage movement of the United States. She was also a physician and one of the first ordained female Methodist ministers in the United States. Shaw is known for being a key member in the unification of various suffrage groups to create a united front in the women's suffrage movement. She lived near the location where this historical marker was erected from 1908 until her death.

Anna Howard Shaw during her time at Albion College in 1873 where she faced financial hardship due to her family's disapproval of her career choice. 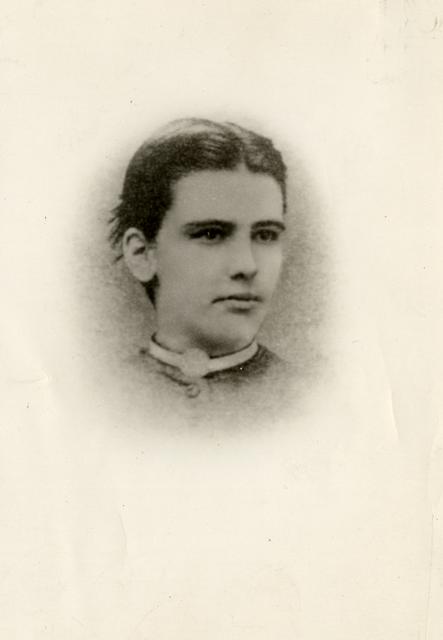 Anna Howard Shaw in 1910 addressing the crowd at a suffrage meeting in Union Square. 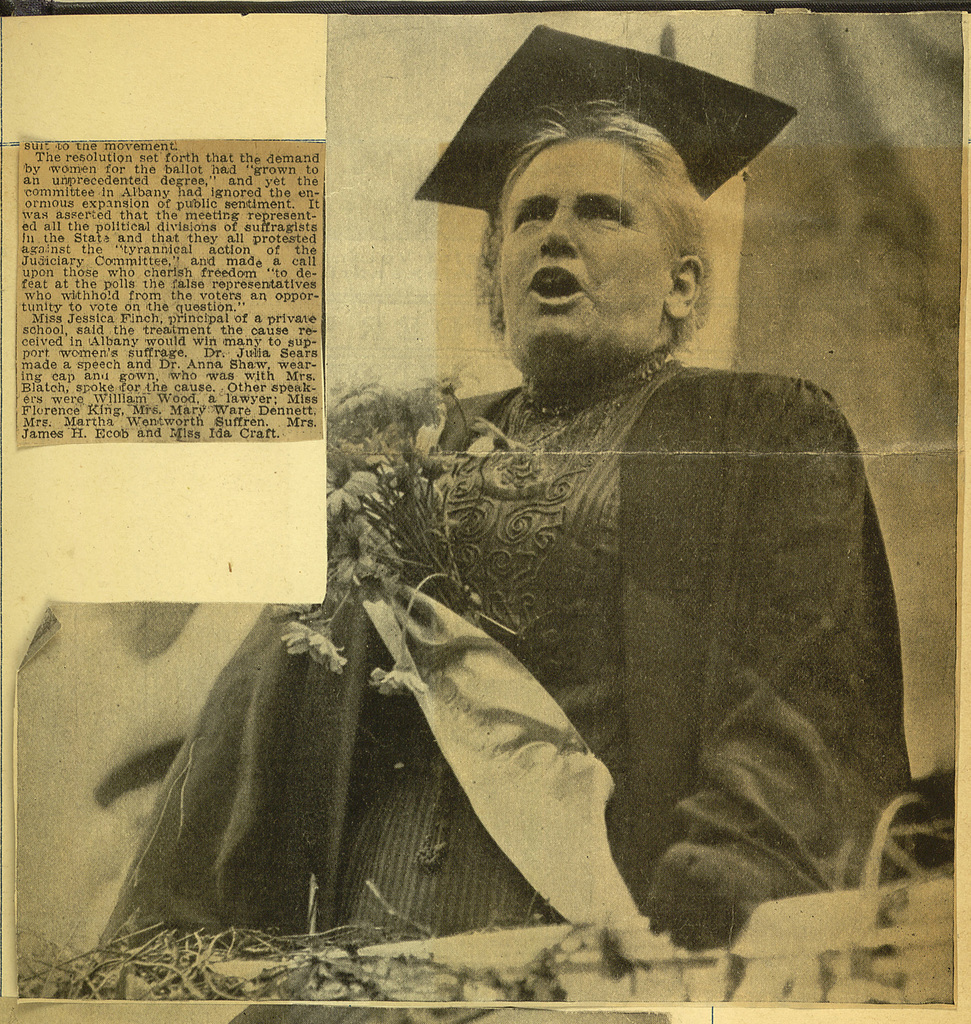 A picture of the Anna Howard Shaw Historical Marker located in Moylan, Pennsylvania; close to where Shaw passed away. 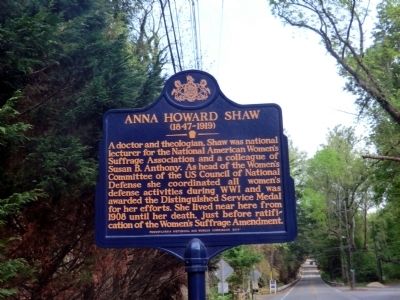 Susan B. Anthony, seated in center, wearing spectacles, and Anna Howard Shaw, standing at the left with her hand on a chair, met with a group of Utah woman suffrage leaders in 1895 after they united both of their organizations.. 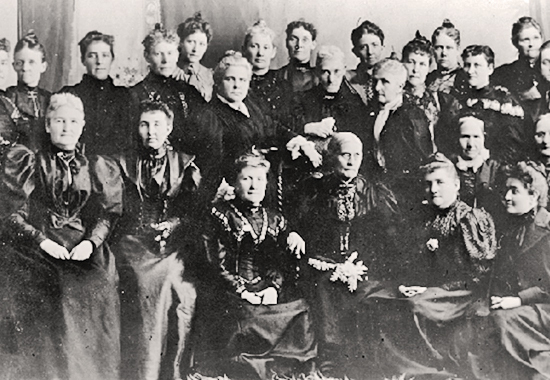 "The Pennsylvania Historical and Museum Commission administers a program of historical markers to capture the memory of people, places, events, and innovations that have affected the lives of Pennsylvanians over the centuries since William Penn founded his Commonwealth. More than 2,000 cast aluminum markers tell the important and interesting stories that are part of the history of Pennsylvania."

Few have a more interesting story than that of Anna Howard Shaw. Before she was a key player in the women's suffrage movement of the United States, Shaw was a master of several different crafts.

Shaw was born in Newcastle-upon-Tyne in 1847. When she was four, she and her family emigrated to the United States and settled in Lawrence, Massachusetts. From an early age, Shaw had a call to preach. Her passion to preach received disapproval from her classmates, friends, and family who agreed to pay for her college education only if she abandoned preaching. Despite such continual opposition and isolation from so many, Anna chose to keep on preaching. Shaw went on to study at Albion College in 1873 with no financial support from her family due to her career path. Shaw then went on to study at Boston University's School of Theology in 1876 where she was the only women in her class. At BU, Shaw was exposed to many inequalities due to her gender. Shaw found it unfair that the male licensed preachers were given free accommodations in the dormitory and their board cost each of them $1.25 while it cost her $2 to pay rent of a room outside. Shaw also struggled to find work as a preacher in Boston. Due to these financial hardships, Shaw considered a career change.

While serving Wesleyan Methodist Church in East Dennis, Massachusetts, Shaw earned a medical degree from Boston University in 1886. At age thirty-nine, she broadened her activity from pastoral and healing ministries to also become the “master orator” for social justice concerns, organizing and lecturing throughout the world for the causes of temperance, woman’s suffrage, and peace. Shaw was the first ordained woman to preach in Amsterdam, Berlin, Copenhagen, and London, and the first woman to deliver a sermon in the State Church of Sweden. The first woman awarded a Distinguished Service Medal for her work as chair of the Woman’s Committee of the National Council of Defense during World War I, Shaw was an advocate for the League of Nations covenant just prior to her death in 1919.

Though Shaw was a very accomplished doctor and preacher, her legacy is due to her endless devotion to women's suffrage in the United States. Beginning in 1886, Shaw served as the chair of the Franchise Department of Women's Christian Temperance Union (WCTU). Her task was "to work for woman suffrage and then to use the ballot to gain 'home protection' and temperance legislation." However her focus on temperance subsided as she became more heavily involved in the suffrage movement by lecturing for the Massachusetts Suffrage Association and later the American Woman Suffrage Association (AWSA). It wasn't until 1887 that Shaw met Susan B. Anthony. In 1888, Shaw attended the first meeting of the International Council of Women. Susan B. Anthony encouraged her to join the National Woman Suffrage Association (NWSA). Having agreed, Shaw played a key role when the two suffrage associations merged to create the National American Woman Suffrage Association (NAWSA). For the first time in the women's suffrage struggle, the movement finally had some teeth now that there was a united front. Shaw was the president of NAWSA from 1904 - 1915. Under her leadership, NAWSA continued to "lobby for a national constitutional amendment granting women the right to vote." She continued to lecture even after her retirement until her death. Shaw died of pneumonia at her home in Moylan, Pennsylvania at the age of seventy-two, only a few months before Congress ratified the Nineteenth Amendment to the US Constitution which granted women the right to vote.

The location of Shaw's death is the basis for the placement of her historical marker by the Pennsylvania Historical & Museum Commission. After a long life of significant achievement and social justice that jumped between many different locations in the Northeast, It is most fitting that the memorial dedicated to honoring this life is placed where it ended. Anna Howard Shaw is one of the most influential women in the history of the United States. The fact that this isn't the only monument honoring her legacy is testament to that. There is also a statue of Anna Howard Shaw that was erected next to the Community Library in Big Rapids, Michigan, in 1988. Boston University School of Theology opened the Anna Howard Shaw Center and the Albion College opened the Anna Howard Shaw Women's Center. There is also the Anna Howard Shaw Junior High School built in 1922–1924 in Southwest Schuylkill, Philadelphia. This historical marker will last for a very long time, just like the amazing legacy of Anna Howard Shaw.