Devils Tower is one of Wyoming's many natural attractions. Devils Tower is a tall formation of rock surrounded by flat land. The monument rises to one thousand feet above ground near the Belle Fourche River. It is a modern marvel where tourists come to witness its natural beauty. President Theodore Roosevelt declared Devils Tower, America's first national monument. Many Native American Indians that lived around Devils Tower have considered it to be a sacred area. They have many ideas on how the formation was created. The most popular is where two girls are playing in the woods and a bear starts chasing them. The girls jump on a rock hoping to be safe from the bear. The Great Spirit from above sees the girls in terror and he makes the rock grow to the sky. The bear tries scratching its way up but fails, only leaving huge claw marks in the side of the tall mountain. The geology of Devils Tower is quite amazing. During the end of the dinosaur period, land had built up pressure creating the tower that stands today. Scientists call this formation a “volcanic plug.” The volcanic plug is formed by magma that never reaches the surface of Earth. The tower is eroding and is slowly deteriorating. Stone remnants remain at the base of Devils tower and continue to erode today. Devils Tower is rock climbing accessible. In 1893, the first climb to the top of Devils Tower used several ladders connected by pegs and hammered into the mountain itself. A rancher named, William Rogers was the first man to climb the set of ladders on July 4th. Today, the ladder has become unstable but can still be seen by tourists that visit Devils Tower. The tower is still very sacred to Native American tribes. The climbers are asked not to ascend the mountain during June to respect ceremonies that may take place that month. Devils Tower is one of America's great wonders and is open to the public. Pack some hiking boots and explore the natural beauty of Devils Tower. 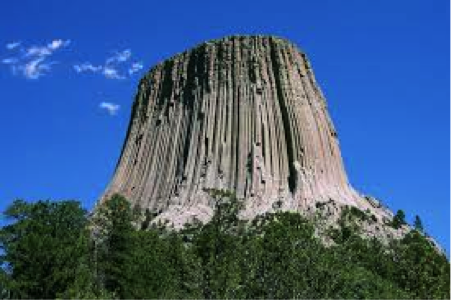