Cool Spring Tavern, surrounded by shady oak trees, wisteria, and soothing sounds of running water, is known in Fayetteville, North Carolina, as the city's oldest surviving structure. Located on Cool Spring Street near Downtown, the building served an important post-revolutionary role, housing delegates to the 1789 North Carolina Constitutional Convention. The tavern sprang from Cross Creek during a time when Fayetteville began to prosper as an inland port community and an important political center for the state. Steeped in history and folklore, it is one of the few remaining Federal-style buildings in the city, its architecture symbolizing the rise of the Federal Government and the growth of the nation. 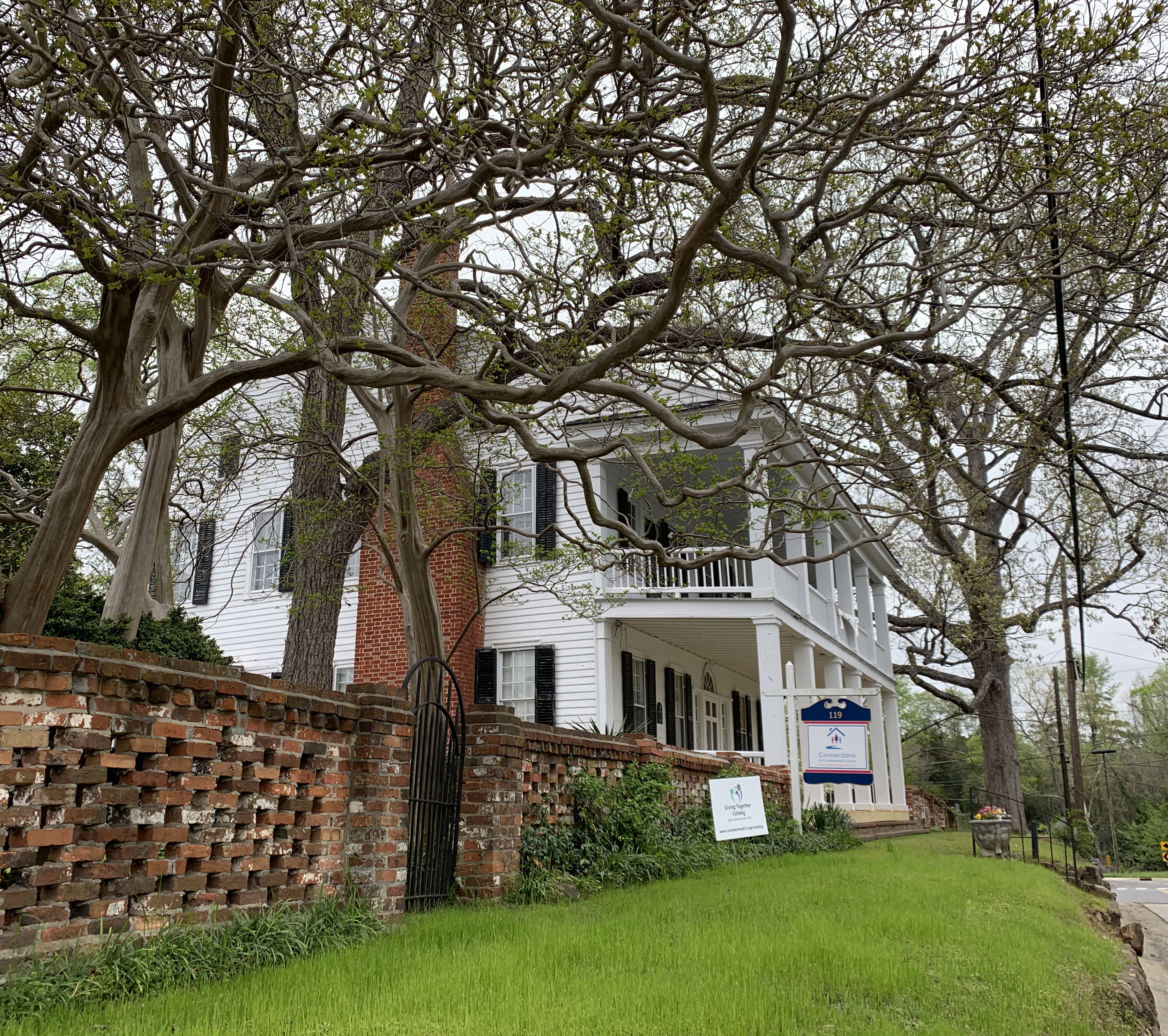 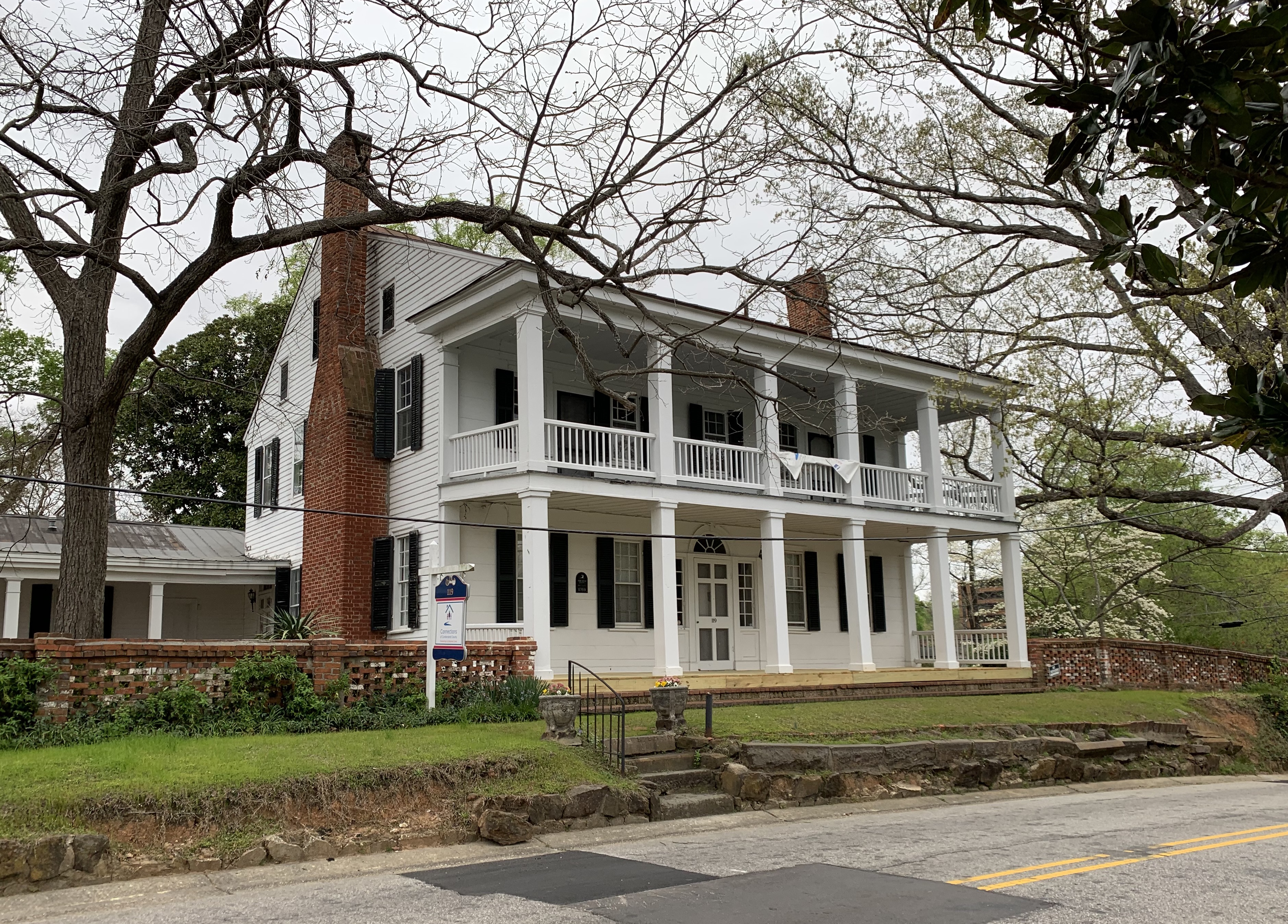 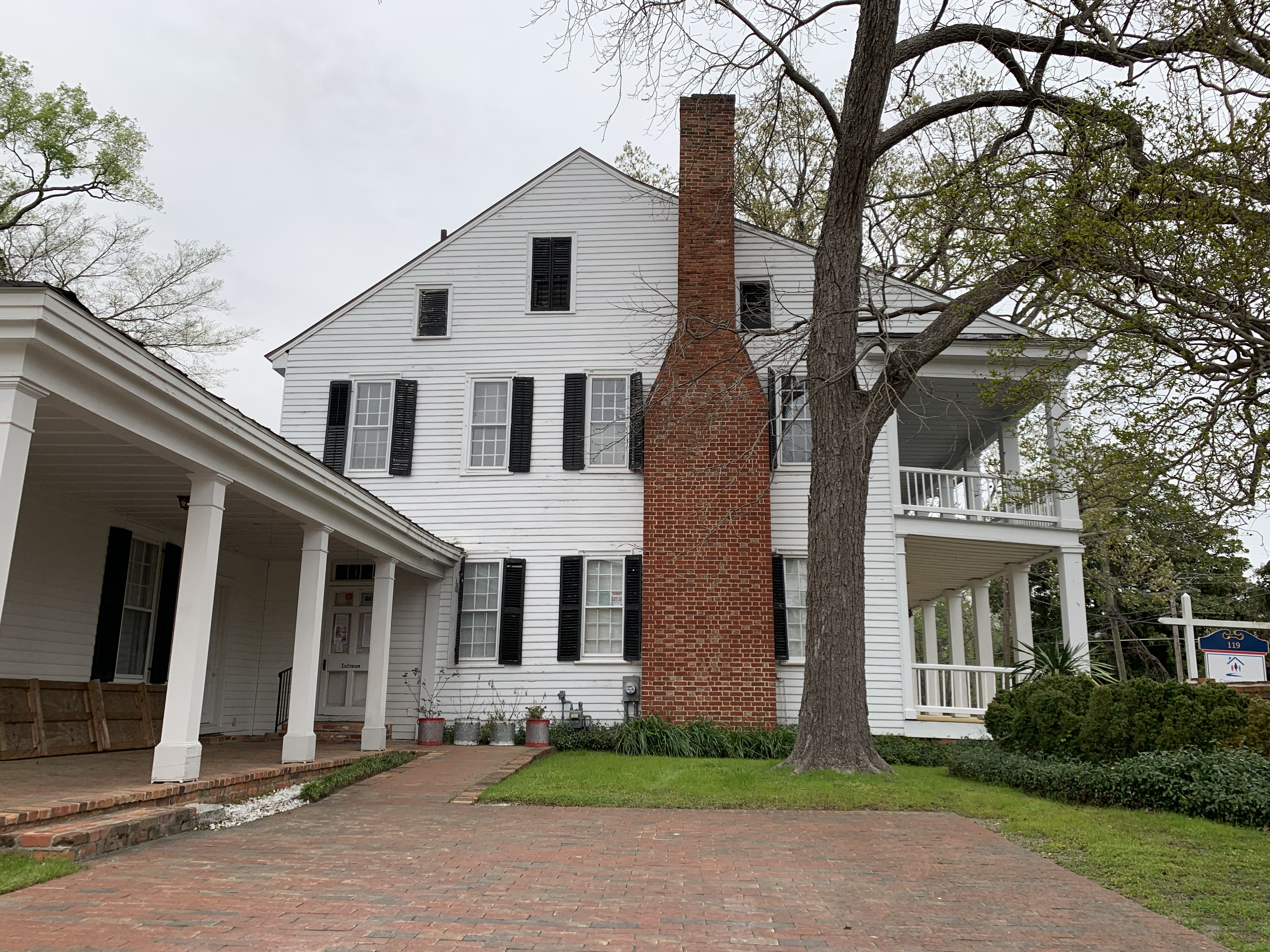 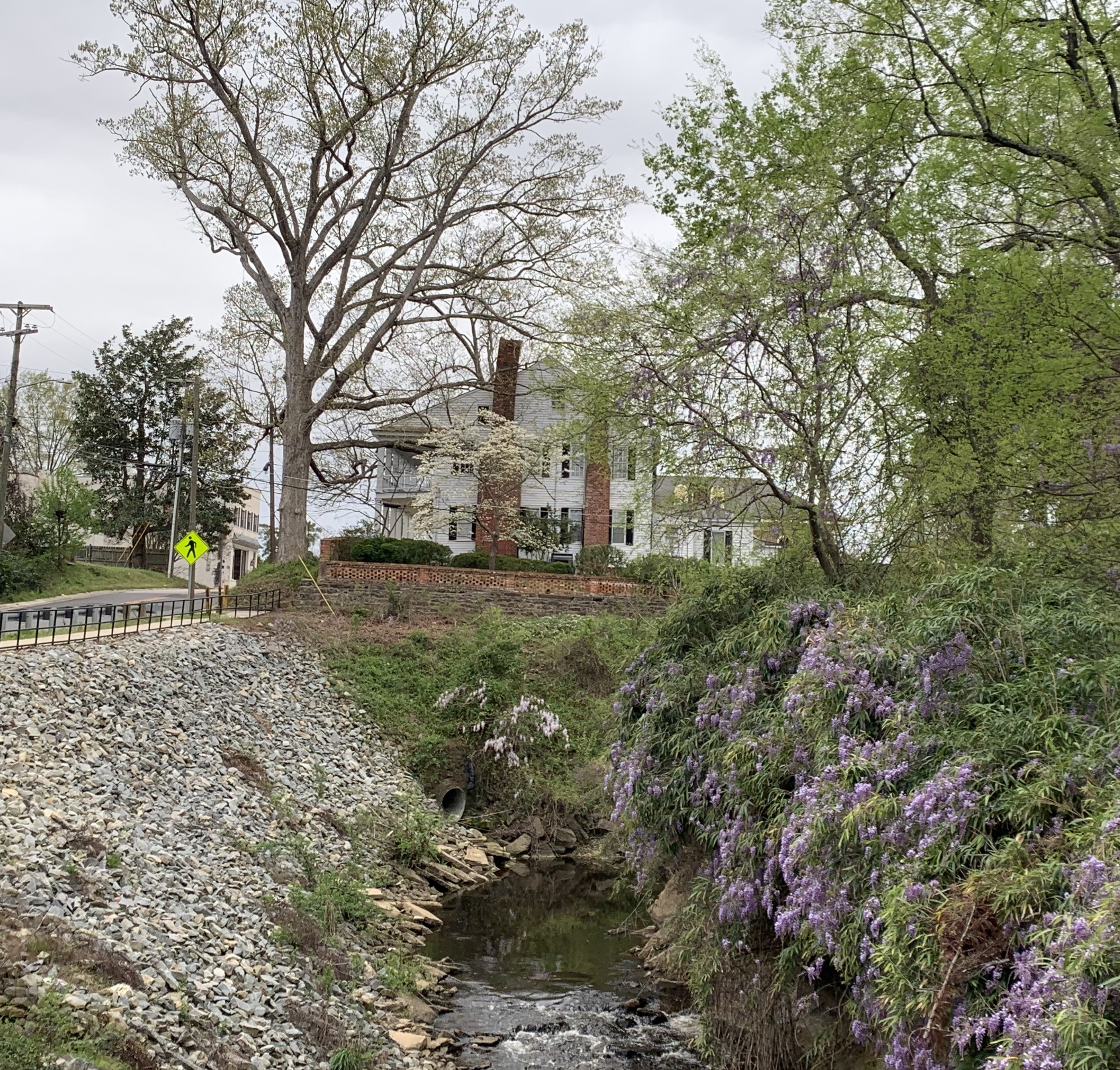 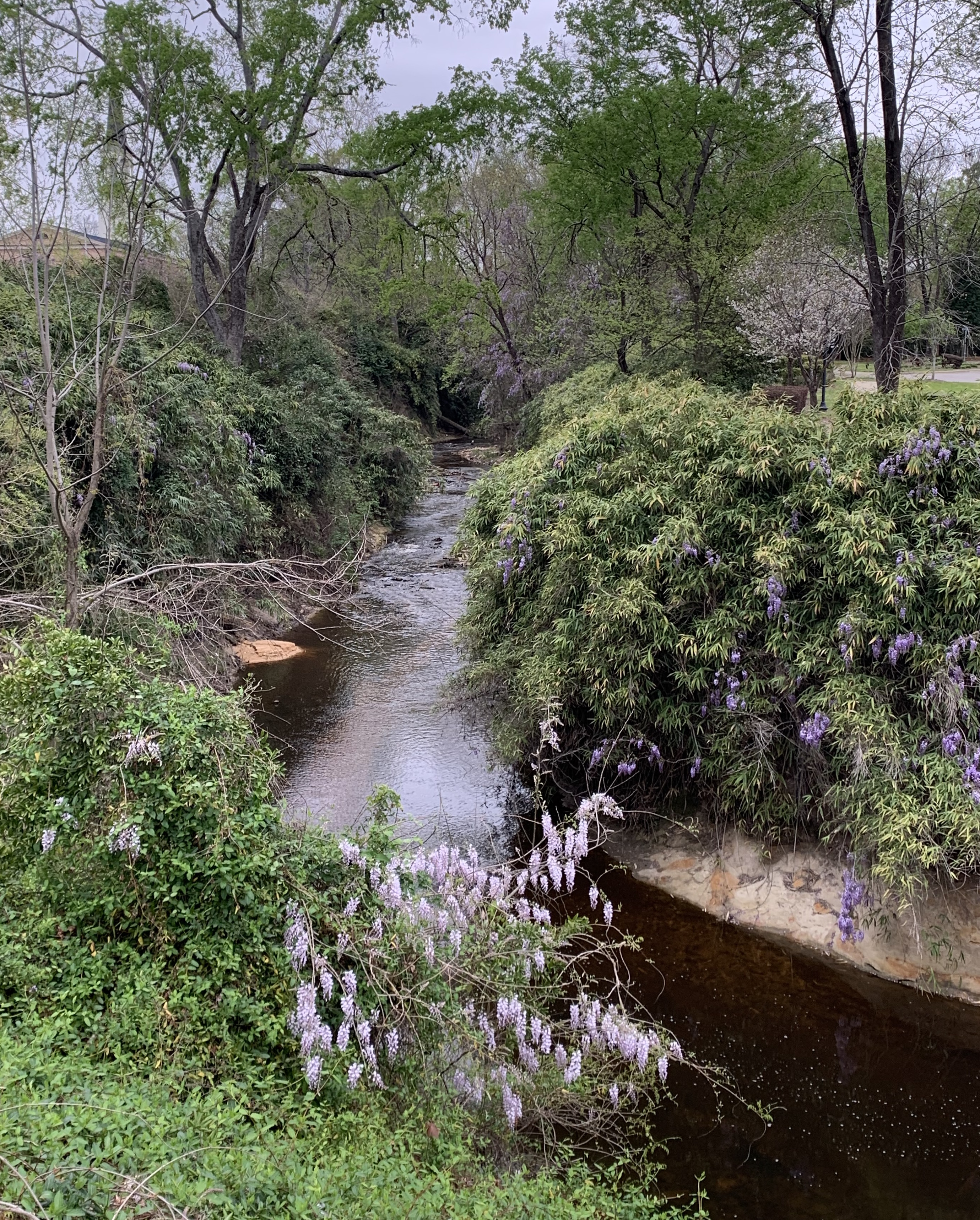 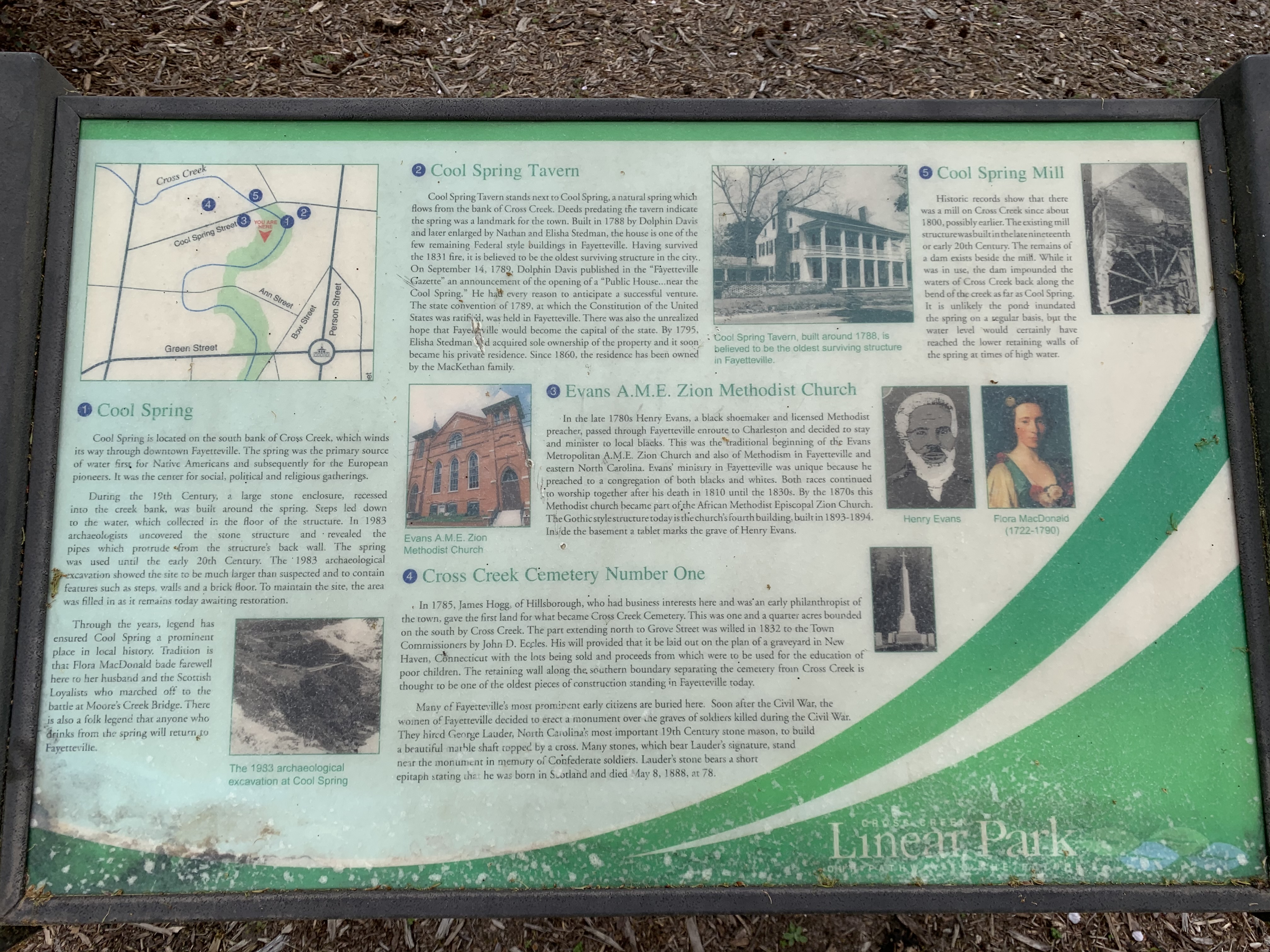 Dolphin Davis built Cool Spring Tavern in 1788. Originally from Virginia, Davis was a soldier in the American Revolution and fought at the Battle of Kings Mountain. He later settled in Fayetteville and married Ann Stevenson, the daughter of a Scottish immigrant that, like many North Carolina settlers, arrived in the Cape Fear Valley after surviving the 1746 Battle of Culloden in Scotland (Brawley, 1986). The following announcement appeared in The Fayetteville Gazette on September 14, 1789: “The subscriber begs leave to inform the public, that he has opened a Public House, in Fayetteville, near the Cool Spring. Every exertion will be made to oblige those who may please to favor him with their custom. Dolphin Davis.” The building exemplifies Federal-style architecture, which was dominant in America following the Revolution and symbolic of the growing nation. According to a historical marker at the site (pictured), the tavern functioned as a public house and inn until 1795, when it became a private residence for Elisha Stedman. The house was purchased by the McKethan family in 1860 and has gone by several names over the years, including Cool Spring Inn, Cool Spring Place, Old Davis Inn, and McKethan House.

The location of the tavern had significance long before its construction. It was built on a high bank of Cross Creek at its convergence with Cool Spring, which had been the area's primary source of water for Native Americans and settlers alike. The site was formerly part of a settlement founded as a trading post in 1756, also called Cross Creek. In 1783, the town of Cross Creek merged with Campbellton, a settlement established as a port town in 1762, just one mile away on the Cape Fear River. The newly combined city was named Fayetteville in honor of Marquis de Lafayette, the beloved Frenchman who was famous for his support of the Americans during the Revolution (Johnson, n. d.). Before 1792, the City of Raleigh did not yet exist, and North Carolina had no capital. Therefore, Fayetteville was a key location for political meetings during Cool Spring Tavern's early years.

The tavern opened for business in time to lodge delegates of the Constitutional Convention in November of 1789 (Barefoot, 1998). Federalists and Anti-Federalists had been unable to reach an agreement at the previous convention in Hillsborough, neither accepting nor rejecting the Constitution. Anti-Federalists feared losing individual liberties by giving too much power to the central government and would not consider ratification without a Bill of Rights. Federalists campaigned for another convention and used their influence to gain support for ratification. By the time the second convention met in Fayetteville, George Washington had been unanimously elected president, the central government seemed stable, and a Bill of Rights had been added to the Constitution. Delegates overwhelmingly voted to ratify the U.S. Constitution in Fayetteville on November 21, 1789, making North Carolina the twelfth state to join the nation (Cavanaugh, 2006). Evidence suggests that members of the General Assembly likely stayed at the tavern for other significant events as well. Lloyd Johnson's entry on the City of Fayetteville for the North Carolina History Project states the following:

"In 1788 North Carolinians considered making Fayetteville the state capital, and in 1789, the General Assembly met there and chartered the University of North Carolina, ceded the state's western lands to Tennessee, selected the state's first two United States Senators, and eventually ratified the Constitution of the United States. The North Carolina General Assembly continued meeting in Fayetteville until the legislative body moved in 1794 to conduct business in Raleigh."

Over subsequent years, Cool Spring Tavern survived misfortunes that struck the city, including a devastating fire in May of 1831 and Sherman's March in 1865. The fire started in a kitchen and spread quickly, engulfing over 600 buildings and stopping before it reached Cool Spring (Destruction of Fayetteville, 1831). The damage was estimated to be around 1.5 million dollars, and the nearby State House, where patrons of the tavern had ratified the Constitution, was ruined. The State House was replaced by the Market House in 1832, which served in part as a slave trade market before the Civil War and is arguably the city's most controversial and recognizable historic site. General William T. Sherman and his troops arrived to Fayetteville in March 1865, destroying a federal weapons arsenal and much of the town. The following excerpt is from a letter written by Maj. W. S. Downer and was published in The Daily Conservative on March 21, 1865: “Fayetteville is ruined. All the Arsenal Buildings, the Market House, Court House, printing office, both Foundries, all the Mills, Cotton Factories, Oil Works, Mr. Mallet’s house, Mr. McLean’s house, (etc.). They robbed the people of everything in the way of food.” Cool Spring Tavern, however, endured.

Cool Spring Tavern also has a place in local culture and folklore in Fayetteville. Flora McDonald, who assisted Bonnie Prince Charlie in escaping from Scotland after the Battle of Culloden, was a well-known heroine to early Scottish Highlanders in North Carolina. At a spot just across the street from the tavern, she purportedly bade farewell to her husband as he left for battle at Moore's Creek Bridge during the Revolution (Barefoot, 1998). North Carolina Governor Richard Caswell died in the tavern while residing there for the Constitutional Convention in 1789, and rumors claim that his ghost haunts the building. There is also a story of a young servant who hanged herself in the attic and supposedly carries a candle, haunting the tavern along with Caswell (Hudson, 2019).

The building is on the National Register of Historic Places and still serves an important role, housing Connections of Cumberland County, a nonprofit organization that serves women and children who are homeless or at risk of becoming homeless. It is not currently open to the public, except during special events. The exterior of the building can be viewed daily, before dusk. The site is part of the Historic Architecture Trail in Fayetteville and is located near the Cool Spring Downtown District and Linear Park. Other nearby historic landmarks include Cross Creek Cemetery, Evans A.M.E. Zion Methodist Church, Cool Spring Mill, Liberty Point Store, the Market House, the original parade field of the Fayetteville Independent Light Infantry (which still serves today as the nation's second-oldest militia), and the burial site of Isaac Hammond – freed slave, Revolutionary War veteran, and a fifer in the Fayetteville Independent Light Infantry for over 30 years.

Daily, before Dusk. Exterior view only.