Fort Christiansvaern has served as a focal point of the island that it is on. Construction of the fort started in 1738 and was completed in 1749. In 1952, the fort was restored, and it became a National Historic Site. One of the main reasons the fort was originally built was to provide protection for the island against pirates and rebellious slaves as Danish soldiers stood post. In 1830, a new plan created by the Danish military stationed one infantry company and an artillery attachment to the fort to assist the militia already there and help with emergencies.

Front of the fort 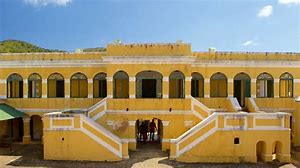 Back of the fort

Fort Christiansvaern is located on St. Croix in the U.S. Virgin Islands, and is part of a larger National Historic Site in the town of Christiansted. Christiansted was founded by Frederik Moth, with colonization beginning around 1734 and the first streets laid out the following year. The site also includes important structures such as the Danish West India & Guinea Company Warehouse, Steeple Building, Danish Custom House, and Scale House. The fort, however, is the oldest structure on Christiansted. Built on the remains of French Fort St. Jean, which was destroyed by a hurricane, construction began in 1738. However, by 1744, the fort was only half completed.

In 1740, the Company only retained four enslaved Africans, but that number began to grow. African men were often transported into the slave station for exhibition, where they were auctioned off, although the slave station was later separated from the fort. By 1747, the Company had 53 captured men, and 62 by 1751. Work on Fort Christiansvaern was completed during that time, in 1749. Some of the enslaved Africans responsible for the structure include masons Aquilla and Mingo/David, as well as carpenters Abraham, Acra, Andreas, and Jamil, who served as site managers.

The Danish King Christian VI of Denmark-Norway granted the Danish West India and Guinea Company permission to establish all of the forts on the island under the Danish flag. He funded all of them and they were eventually named after him. Fort Christiansvaern was named to mean “Christian’s Defense.” The nobles also made investments that caused them to risk their ships and men. From 1670 to 1755, the Company ruled the colony and was named under the Danish flag that is on the fort.

The main purpose of Fort Christiansvaern was to protect the colony from pirates, slave revolts, and hurricanes, as well as being a location to quarter Danish troops. It is a brick structure that is painted yellow and is surrounded by a central courtyard. The pale yellow was an example of the Danish colonial style at the time of the fort's construction. North of the fort, a pilot station was constructed on Protestants’ Quay, where cannons provided as protection against attacks were donated by the king. The fort also enforced the tax payments on the import of goods. The last major additions were made from 1835-1841, when a stable yard was added to the east side and a walled prison to the west.

The African Americans who were enslaved also left their mark on this fort. The slaves who were captured were stuck on the island before boarding the slave ships to the West Indies. From 1675 to 1715, the Brandenburg African Company had the right to operate the slave trade from the island because the Danish West India and Guinea Company was not financially stable. The slave station that was in the fort was important to the organization and to the colony.

Fort Christiansvaern was recognized as a National Historic Site on March 4, 1952. The fort covered the historical structures with the boundaries that were involved with the Danish. The fort and surrounding grounds were one of 3 Virgin Island venues for the ceremony that transferred the Danish West Indies to the U.S. on March 31, 1917, creating U.S. Virgin Islands. It now operates as a tourist attraction as a park and slave museum commemorating the history of the island.