In 1884, “Little Red” was opened. This building was the first cure cottage in Saranac Lake, constructed to house patients who had tuberculosis. The $350 building is 14 by 18 feet, one story, with a small porch. Funds for construction were donated by Mrs. William Jenks, of Philadelphia. It was a simple building which was constructed for two working women - sisters, Mary and Alice Hunt. The small scale of the cottage had several advantages over larger structure- improved ventilation and sanitation, and Dr. Edward Livingston Trudeau would find that donors liked funding an entire small structure rather than part of a large institution. Patients who lived in Little Red or any of the neighboring cure cottages would go out for fresh air on sleigh rides and walk to the main building- where the caretaker lived- for meals and baths. Little Red became a national symbol for the treatment of tuberculosis after it was featured on Christmas Seal in 1934. The building has been moved from its original site several times. It was moved about 1890, and again in 1920 and 1935; in 1964 it was moved to the grounds of Trudeau Institute where it remains. 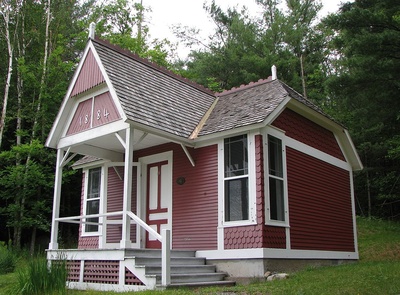 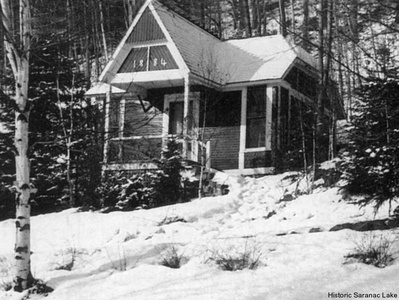 "Little Red" is the symbolic original cure cottage of the Adirondack Cottage Sanitarium founded by Dr. Edward Livingston Trudeau. He wrote of it: "This first cottage consisted of one room, fourteen by eighteen, and a little porch so small that only one patient could sit out at a time, and with difficulty." 1 The small scale of the cottage had several advantages over larger structures— improved ventilation and sanitation, and Trudeau found that donors liked funding an entire small structure rather than part of a large institution.

Called either the "Little Red" or "The Jenks" cottage when it was built, it was originally sited on the northeast side of the first Main Building (Site #1). The cost to build it was $350, donated by Mrs. William Jenks, of Philadelphia. Sisters Mary and Alice Hunt, tuberculous factory workers, were its first patients; they both recovered. An eyewitness, Marguerite Armstrong, wrote: "The Main Building was completed February 1, 1885. A few days later, two or three non-paying patients were cared for in this building. But the first cash book patients were entered, May 5th, and placed in the 'Little Red.' For this reason Little Red has been called The Pioneer. As a matter of fact, the two other Little Stokes [cottages] were completed at the same time." 2 While the common story is that sisters Mary and Alice Hunt, tuberculous factory workers, were the first patients in Little Red, it is not know whether they were the non-paying — or the first paying — patients; they both recovered.

In 1913 the cottage was moved back a further 25 feet to make more space for an addition to the Service Building (Site #3).

In 1914 it was reportedly placed in its "permanent" position where it was used as the home of old employees. This location has not been identified, and does not seem to appear on any map. Because of the closeness of the dates, this may be the same as Site #3. The groundskeeper Ell Kelly lived in Little Red after his wife died, perhaps at this location.

In 1935 at age fifty, Little Red was taken to a "location on the main entrance road." 3 On the map of 1930+, it is shown well down the road toward the South Gate, just north of Reid Nurses residence, in the area of the grounds in which employee housing was concentrated. The site can be identified by its filled-in steps in a low stone wall and a flagstone walk leading to a stone foundation (Site #4).

Finally in May of 1964, Little Red was removed from the grounds of the sanatorium and relocated as a memorial at the new Trudeau Institute on Lower Saranac Lake (Site #5, present). Little Red is listed on the National Register of Historic Places as one of the cure cottages of Saranac Lake.

Members of an art museum from western New York visited Little Red on a tour in the late 1990s. Two of the tour-goers were a retired couple — both doctors — who had worked at Trudeau Sanatorium early in their careers. Imagine everyone's surprise when they saw Little Red and told the rest of the visitors that they had spent their internship/honeymoon in Little Red!

Edna Dubray VanNortwick was a housekeeper at the Trudeau Sanatorium. She met her husband, David, when he was working as a delivery person. The two married c. 1900. Dr. E.L. Trudeau offered to let them honeymoon in Little Red.