Known by the Native Americans that inhabited the area, what became Bethesda Springs was first mentioned in the early 1830's when government workers took sick and a local guide informed them of the waters. By 1868, Col. Richard Dunbar had purchased the property from his sister in law Elizabeth Carney and launched the Bethesda Spring Water company, named after the pool of Bethesda in the Bible. He began what today is known as the Springs Era, transforming Waukesha into a world-renowned resort city. During the Depression, Bethesda Springs went into receivership and was purchased by the Chicago "Bon Ton" business which moved to Waukesha and continued to bottle the water through the 1970’s. Bethesda changed owners several times throughout the period spanning from the late 1970s to the 1990s. By 1997, Bethesda’s last owner went bankrupt and the bottling of water ceased. 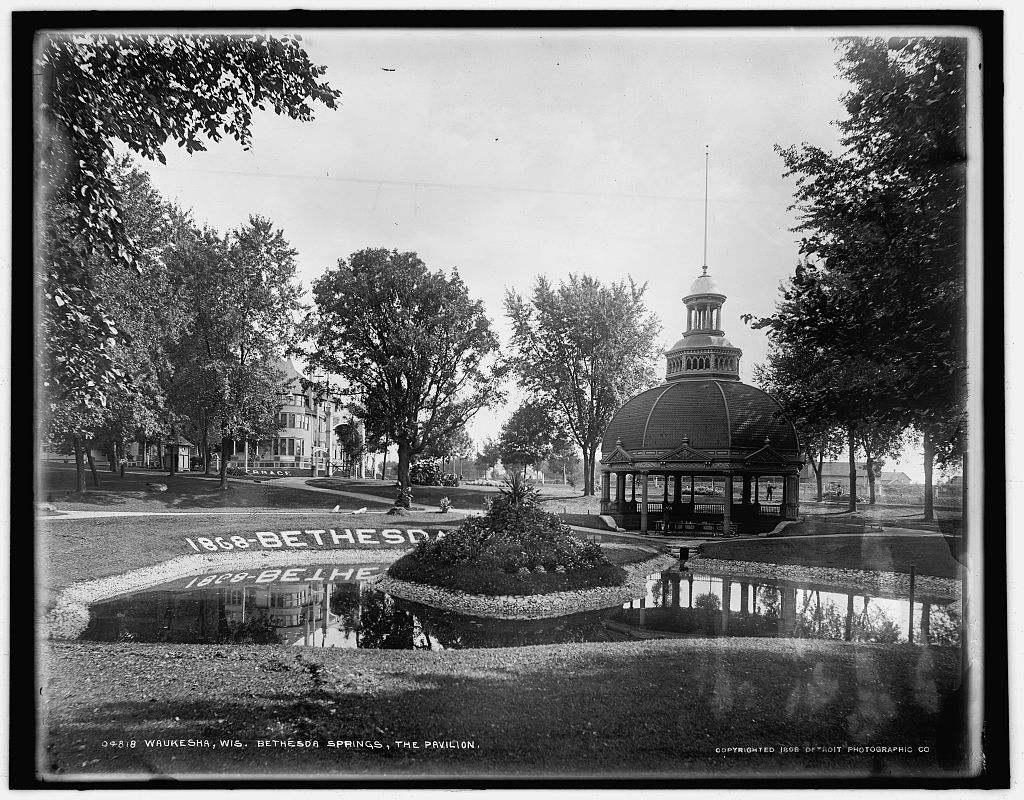 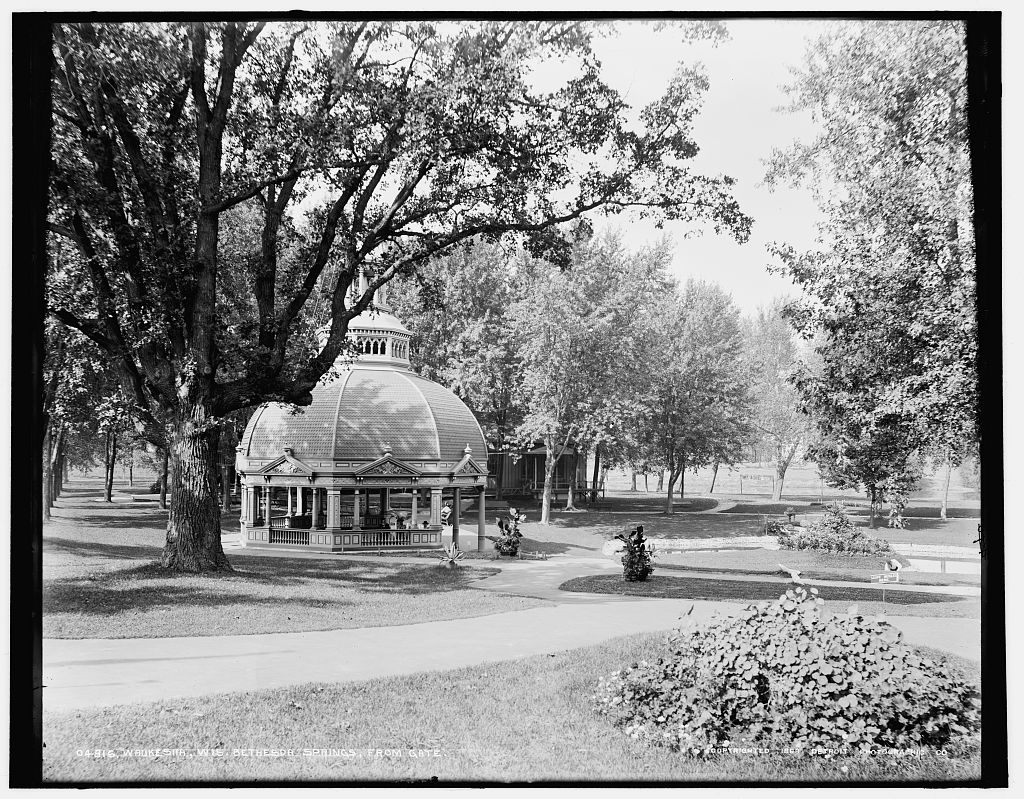 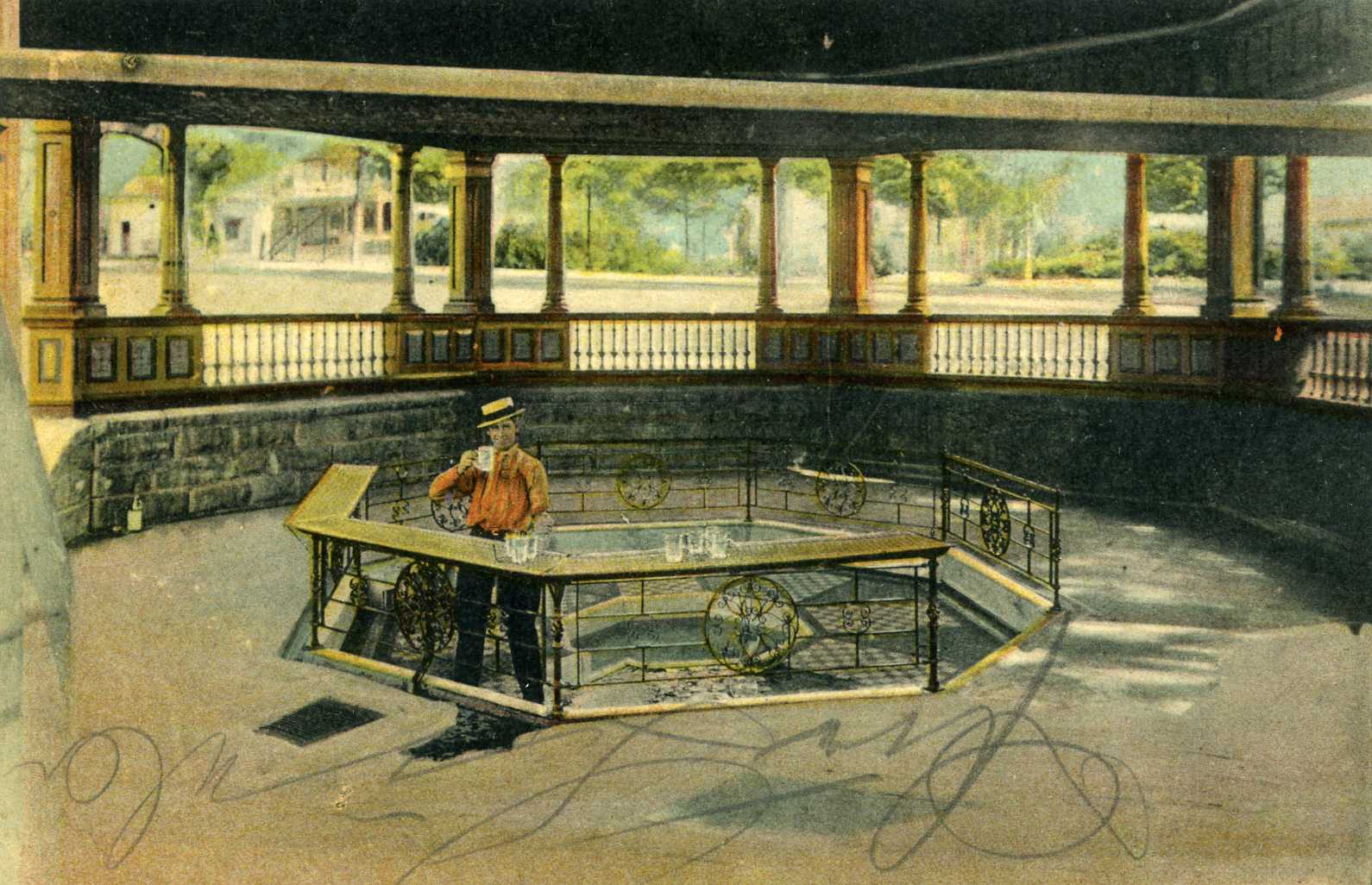 Known as Bethesda park today, this site is home to the Bethesda Spring that reshaped the economic and social landscape of Waukesha in the second half of the 19th century. One of many naturally occurring mineral springs throughout the city, it was developed and marketed by Col. Richard Dunbar and his wife, Catherine. It was marketed as a water based alternative medicine—or hydropathy—offering customers “healthful benefits” by drinking the mineral water. Dunbar first visited the spring while touring a horse pasture owned by his sister-in-law Elizabeth Carney Clark(e). By 1868, Dunbar had purchased the property and launched the Bethesda Spring Water company. This began what today is known as the Springs Era, transforming the village of Waukesha into a world-renowned resort city.

Bethesda Spring was the first spring water company in the city to market nationally, for both tourists to visit the property and for retail sales of bottled spring water. After Dunbar's commercialization of the spring in 1868 and subsequent promotion of the spring, the business grew phenomenally. Those who visited Bethesda spring brought bottles and buckets to carry the healing water. By 1870, water was shipped in barrels within the United States and internationally. The local newspaper, the Waukesha Freeman, mentioned ceramic demijohns (jug, or carboy) and bottles of water shipping from the Bethesda Spring Water company in late 1871.

On the property, Dunbar developed the land surrounding his spring into a park, planting hundreds of trees, and creating walking paths for patrons to enjoy. Above the spring, eight columns supported the spring house. Inside the spring house, statues of two angels hung by wire over the pool and became the symbol of Bethesda. A hotel project was planned, with a cornerstone ceremony on September 2, 1870 attended by then Chief Justice of the US Supreme Court, Salmon P Chase. Unfortunately, the proposed hotel was never completed.

According to the Freeman, a noteworthy visit to the Bethesda Spring came in June of 1872, when the widow Mrs. Abraham Lincoln came to Waukesha some years after the death of the president and was reported to have visited the spring. Business continued to go well and each year there were improvements to the spring and grounds. In 1874, five latticework pavilions were laid around the Bethesda pool with a spring in each pavilion. This was supposed to recreate the Judean Bethesda as described in the Bible. For the 1876 Centennial of the founding of the United States, Bethesda water was used to celebrate the event in Philadelphia and the spring house and grounds were looking their best.

The Dunbar's had various legal situations to deal with as owners of the Bethesda Spring. One notable lawsuit began later in 1876, when J. K. Glenn claimed that his spring was the source of the Bethesda spring and began promoting his water as Glenn-Bethesda water. In the end, Dunbar lost the lawsuit and the word Bethesda could not be copyrighted. This did not damper business, and barrels of Bethesda continued to ship throughout the world while the Bethesda spring and grounds in Waukesha were a destination for visitors.

Ten years after purchasing the spring, Colonel Dunbar died of heart failure on December 15, 1878. The city mourned the passing of a great man. Catherine, his wife, managed the spring for several years, but sold the property in 1881. The ensuing years were ones of stagnation. A group of businessmen ran the spring and though the spring continued to attract visitors, it ran into stiff competition as other spring sites developed throughout the city.

In 1885, the board of directors hired Alfred "Long" Jones to manage Bethesda Spring. Jones was a former Illinois senator and a popular figure. Called "Long" because of his 6'3" height, he greeted his visitors and saw to their every comfort. He also began charging people to visit the spring, a controversial move that was met with much opposition. Jones purchased stock in the corporation and was elected chairman in 1888. He oversaw many improvements to the park. Business grew tremendously and in 1889 it was recorded that 5,000 quarts of water were bottled daily.

As Jones focused on the social aspects of the spring, more improvements were made in the 1890s. Jones constructed a large hotel, the Terrace, on Dunbar Avenue opposite the entrance gate. In 1892, a spectacular Bethesda pavilion was built with two levels of marble floor for the spring and the visitors. Some of the features of the pavilion were prisms of colored class arranged so that the colors of the rainbow merged on the pool of water and electric lights lighting the structure at night. The Fox River was also dredged to make a better location for boaters.

Jones' son, Alfred Wirt Jones, replaced his father as manager in 1896. He continued what is father had started and business continued to grow. By 1906, Bethesda shipped 300,000 gallons of water annually.

During the 1920s, the business was reorganized and continued successfully. In 1934, however, felled by the Depression, Bethesda went into receivership. A trio of Chicago investors, Morris Cohn, Herman Glick, and George Brenner purchased the company and moved the Chicago "Bon Ton" business to Waukesha.

Bethesda products continued to be bottled by the Bon Ton Company through the 1970s. The Slogan "Bottled At The Spring" was adopted. Exciting new soda water flavors were developed by the company in the lab, which was installed in the plant.

The company sold most of the park to the city but retained the rights to the water. In 1949, the beautiful pavilion was demolished. The owners claimed it was beyond repair, and replaced it with a simple concrete block structure, which remains there today.

Bethesda changed owners several times throughout the late 1970s - '90s. The change in ownership led to deterioration of the bottling equipment. In 1997, when the parent company of Bethesda (located in Pennsylvania), went bankrupt, the bottling of water ceased. The water continues to flow at Bethesda Spring, however, and is said to be of the same quality that Colonel Dunbar discovered in 1868.

From 1868 - 1914 Waukesha was renown for its naturally occurring mineral springs. Across the United States and Europe, water treatment or hydropathy had gained a significant following as an alternative medicine. Both cool and hot water mineral springs were improved in cities and towns across the country, building a new wellness tourism industry. Waukesha became a destination during the summer season, with southerners particularly attracted to the milder northern climate. In Waukesha a shallow aquifer fed the springs, providing a cool crisp mineral water noted for its effervescence (bubbly) quality when fresh. Dozens of companies bought property, some with naturally occurring springs, and others simply digging wells. From simple pavilion structures, dozens of sites were improved across the city. By the turn of the century large hotels and resorts attracted thousands of tourists annually. Spring sites featured bath houses, spas, walking paths and greens space for their clientele. They also sponsored grand balls, outdoor concerts, and parades. The city was transformed each summer with thousands of visitors arriving via train and carriage.